ING says it completed financing for the Cirebon plants before introducing a no-coal policy, and has 'not contributed to any harm'. NGOs say ING should explain how it tried to prevent harm caused by the $2.2 billion corruption-tainted coal project.

A collective of Indonesian environmental campaign groups has filed a complaint about ING loans financing the Cirebon 1 and 2 coal plants in West Java, which it says are responsible for damage to coastal ecosystems, community livelihood losses, human rights violations, and corruption.

The group, called ResponsiBank Indonesia Coalition, a 13 member-strong collective that is part of Fair Finance Asia, timed the complaint with ING’s shareholders meeting on Monday (26 April), and have shared it with Dutch ministers of finance, foreign trade and development cooperation, and the Dutch parliament.

The first coal plant in the coastal town of Cirebon was built in 2012. Cirebon 2 is a $2.2 billion, 1,000-megawatt facility slated to go online next year. The project was mired in a bribery and corruption scandal involving the Korean plant construction company and the former district head of Cirebon.

According to data from ResponsiBank, ING provided US$592 million in financing for Cirebon 2, and awarded Marubeni, the Japanese trading company behind the construction of Cirebon 2, a US$182 million loan. ING also provided financing to Cirebon 1.

ING cannot just slap someone in his face, and say: ‘Sorry, I won’t do it again’.

ResponsiBank’s complaint, which was lodged on ING’s website, noted the social and environmental impacts of the plants. Since Cirebon 1 went online, salt farmers have reported production losses, and fishers say that pollution from the plant has hurt their livelihoods. In 2017, a West Java court ordered the revocation of Cirebon 2’s environmental permit, but the permit was later reissued. 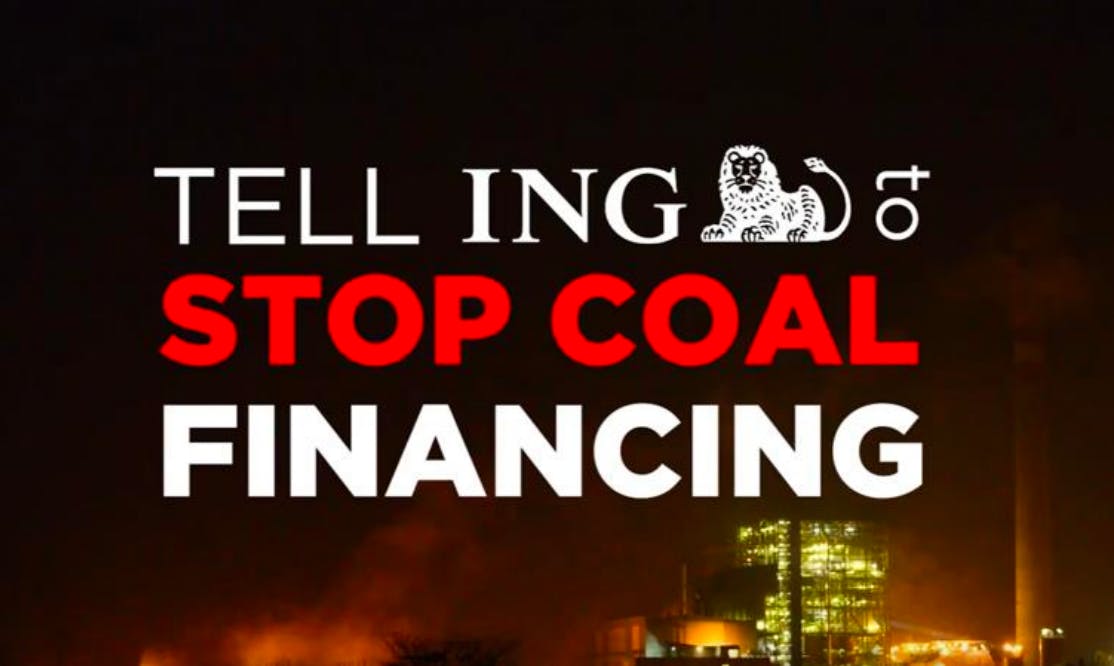 The group has called on ING to publicly detail the measures it has taken to prevent environmental destruction and human rights violations that could result from the coal plants. It also has asked ING to explain how it has worked to prevent corruption, and what the bank did after the corruption allegations emerged.

“If ING is unwilling or unable to provide concrete answers on these questions, stop further funding of Cirebon Coal Plant 2,” the group said.

ING told Eco-Business in a statement that it is not easy to pull out of the project. “Financing does not mean sending money over day by day, but usually means lending a large sum upfront and then getting repaid over time. So ‘ending financing’ of a project is usually hardly possible in practice,” it said.

At the time of financing the Cirebon project, “we performed proper due diligence and used our leverage where needed and possible,” ING added. “We have therefore complied with the OECD Guidelines [on coal financing] and have not contributed to any harm.”

It added that Cirebon was the last coal project it financed before adopting a no-coal policy in 2015, and of its total lending for individual power plants, only 1.6 per cent now relates to coal-fired plants. “We will reduce that to close to zero by 2025,” the bank said.

ResponsiBank’s complaint is the latest of several Indonesian and international NGOs have made about the bank’s funding of the Cirebon plants since 2016. Peter Ras, project lead, Fair Finance Guide Netherlands, said that while ING has improved its coal policies over the years, these policies have made no difference to the projects the bank is already financing.

ING has a continuing responsibility to prevent harm, and encourage or even help arranging remedy for victims of violations and pollution for all projects it finances, Ras said. “ING cannot just slap someone in his face, and say: ‘Sorry, I won’t do it again’.”

Ras added that ING could back out of the Cirebon project by selling off its loan. “However, ING will probably lose money if they do so, and that’s a sensitive issue for them. However, ING has done it before: it has sold its project finance in the Dakota Pipeline,” he said.

The funding of any new coal plants has been deemed incompatible with the Paris Agreement on climate change, according to BankTrack, an NGO, and developed regions such as the European Union need to have exited coal — the single biggest driver of carbon emissions globally — by 2030, with the rest of the world following by 2040.