Speaking at a virtual dialogue organised by a Singapore think tank, Indonesian Coordinating Minister for Maritime Affairs and Investment Luhut Pandjaitan also said Indonesia will be a carbon credits superpower.

A top Indonesian minister on Wednesday (4 November) dismissed activists and countries that have criticised Indonesia’s management of its natural resources.

Outlining reforms the country is undertaking for a low-carbon future, Coordinating Minister for Maritime Affairs and Investment Luhut Pandjaitan declared that Indonesia—which plans to plant about 670,000 hectares of mangroves over the next four years—will be a carbon credits superpower.

Indonesia cares “very much” about its peatlands and mangroves, and wants to take care of the environment for future generations, Luhut said at a virtual dialogue organised by the Singapore Institute of International Affairs (SIIA), a think tank.

Other countries should not try to lecture Indonesia about the environment, he said during his speech at the 7th Singapore Dialogue on Sustainable World Resources. He repeated the point later in the session when taking questions from the moderator, SIIA chairman Simon Tay, alongside Singapore Minister for Sustainability and the Environment Grace Fu. 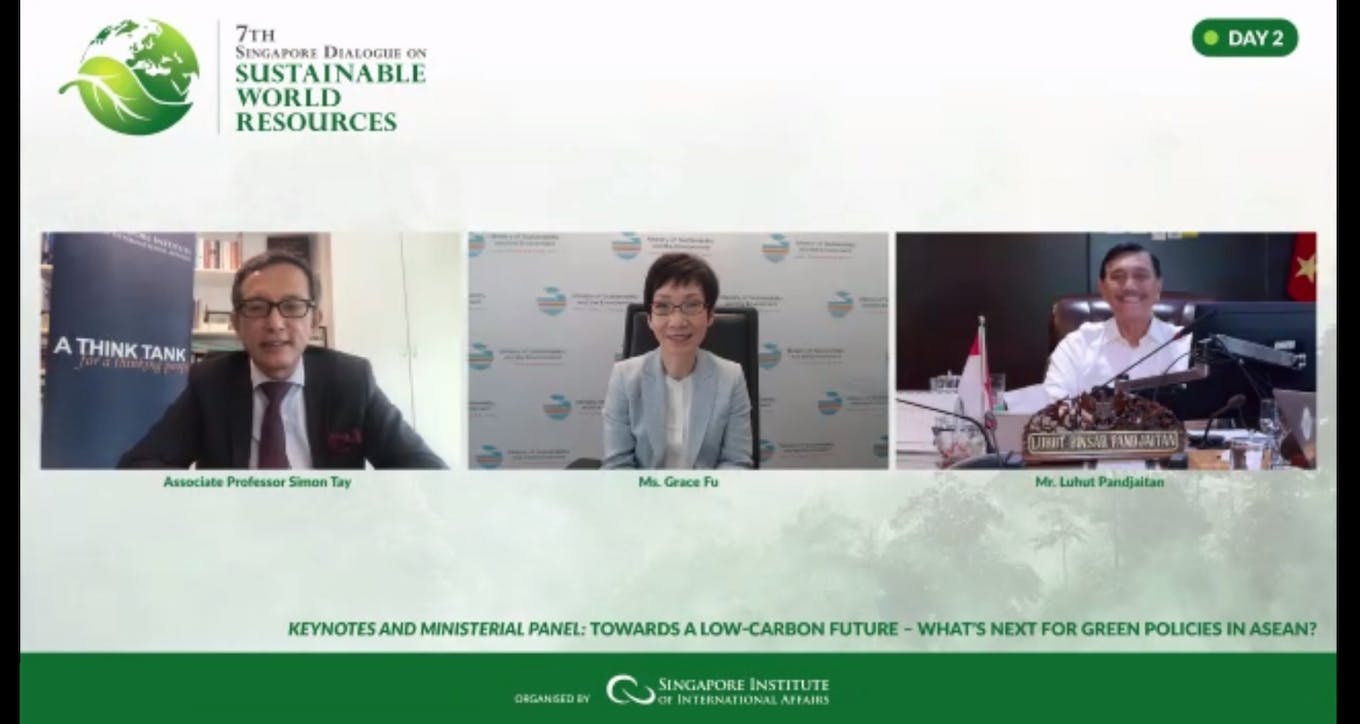 In 2015, Indonesia was heavily criticised for forest and plantation fires that spread over 2.6 million hectares and caused record levels of haze domestically, as well as in Singapore and Malaysia. Between last year and this year, although an area several times larger was burnt in Australia and a comparable area was scorched in the West Coast of the United States, both countries received “very little” criticism, Luhut said.

Indonesia has imposed a moratorium on the conversion of primary forests and peatlands for oil palm, pulpwood and logging concessions.

Haze-causing fires have been a source of tension between Indonesia and its neighbours in the past. In 2016, its environment and forestry minister Siti Nurbaya Bakar said Singapore should focus on its own role in the haze issue. Last year, she blamed Malaysia for causing the haze, only for her Malaysian counterpart Yeo Bee Yin to say she was “in denial”.

On Wednesday, Luhut also dismissed activists’ concerns over two recent issues: Indonesia’s new Job Creation Law, and “food estates” that the government is planning to develop in Central Kalimantan and Lake Toba in northern Sumatra to grow crops on a large scale.

The Job Creation Law, also known as the omnibus law, has incited nationwide protests since it was passed in parliament last month. Environmental law experts and green groups have flagged various ways in which the new law weakens environmental protection—for instance, by limiting public participation in the environmental impact assessment process, and the scrapping of environmental permits for development projects.

Luhut said non-governmental organisations have not read the new law, which seeks to simplify doing business in Indonesia and spur investment. He denied that permits are abolished under the omnibus law. Instead, it takes a risk-based approach to business licensing, and environmental impact assessments remain a prerequisite before licences are issued for high-risk projects.

As for the food estate project, environmentalists have said the Central Kalimantan site will sit on peatlands that were earmarked for an unsuccessful plan to grow rice in the 1990s. But Luhut said the government understands the issue and should not be lectured to. Peatlands are carbon sinks that become a source of greenhouse gas emissions when damaged.

He invited Singapore to play a role in the food estate project and be part of a research centre on horticulture at Lake Toba.

Singapore could also take part in Indonesia’s mangrove planting programme and collaborate on research, he said. The World Bank and Abu Dhabi are keen to be part of the programme, which will see mangrove nurseries being set up in three areas in Java and Sumatra next year, he said.

Indonesia has 3.31 million hectares of mangroves, or about 22 per cent of the world’s total. Since 2015, the amount of healthy mangroves has increased from 1.67 million to 2.67 million hectares, Luhut said. Besides protecting coasts from storm surges and tsunamis, mangroves are powerful carbon sinks that can store much more carbon than terrestrial forests.

Based on a price of about US$15 per tonne of carbon, Luhut estimated that Indonesia could reap US$161 billion in carbon credits from its mangroves. “We are basically a superpower (when it comes to) carbon credits.”

This year, the country received US$56 million from Norway for reducing emissions under the REDD+ (Reducing Emissions from Deforestation and forest Degradation) scheme. REDD+ is a mechanism developed under the UN Framework Convention on Climate Change that incentivises the conservation of forests by creating a financial value for the carbon they store.

The Indonesian government is speeding up work on carbon trading regulations and preparing an emissions trading system for a future domestic carbon market, news outlet The Jakarta Post reported in July.

At the dialogue, Singapore minister Fu said Southeast Asian countries can work together on a protocol for opening up travel post-Covid-19, as well as on reporting frameworks for sustainable products and investments. Countries can also work together on research and share technical expertise in agriculture and other issues, she said.

In her speech, she said Singapore is trying to build back better from the pandemic by turning waste into a resource, innovating for greater resource efficiency, and addressing climate change through measures such as planting trees and decarbonising its transport.