China is losing the equivalent of 11 gigawatts of solar power from polluted air.

China is investing big in solar PV but new research from Duke University suggests that particulate matter in air pollution is slashing panel efficiency by as much as 17 per cent.

Solar radiation can be blocked, absorbed or scattered by particulate matter in the atmosphere – a phenomenon known as solar dimming. This reduces the intensity of sunlight reaching solar panels, resulting in less power being generated.

This is a major issue in China because air pollution is notoriously bad and investment in solar PV is being promoted as a way to fix it.

In 2016, China added 34 gigawatts of solar panels, more than twice as much as the US and about half of the new solar capacity installed worldwide that year.

However, China is losing as much as 11 gigawatts of power as a result of solar dimming, according to the research. That’s almost one third of the solar PV capacity China installed in 2016, and twice as much as Europe installed that same year.

If you really did the economic analysis of these things, you would find that this is yet another reason why the apparently cheap, but very dirty fossil fuels are actually not so cheap.

The study found that particulate matter from human activity has a bigger impact than natural dust. The researchers sampled and analysed matter that collected on solar panels and found that 8 per cent was from anthropogenic sources. That might not sound like much, but that 8 per cent contains organic carbon and black carbon, which are more likely to absorb or scatter sunlight.

In fact, the 8 per cent of anthropogenic particles cause more reduction in power than the 92 per cent of natural dust.

Yingli Group, one of largest solar cell manufacturers globally, is keenly aware of the problem. Ni Jianxiong, deputy head of the company’s technology centre, explained that in really smoggy cities, such as Xingtai and Baoding in Hebei province, generation can be reduced by over 80 per cent unless panels are regularly cleaned. When air pollution is really bad almost no power is generated.

Drew Shindell, a member of the research team and Nicholas Professor of Earth Sciences at Duke University, said the effect of the anthropogenic particles means that China is getting less power from its panels than countries with better air quality. 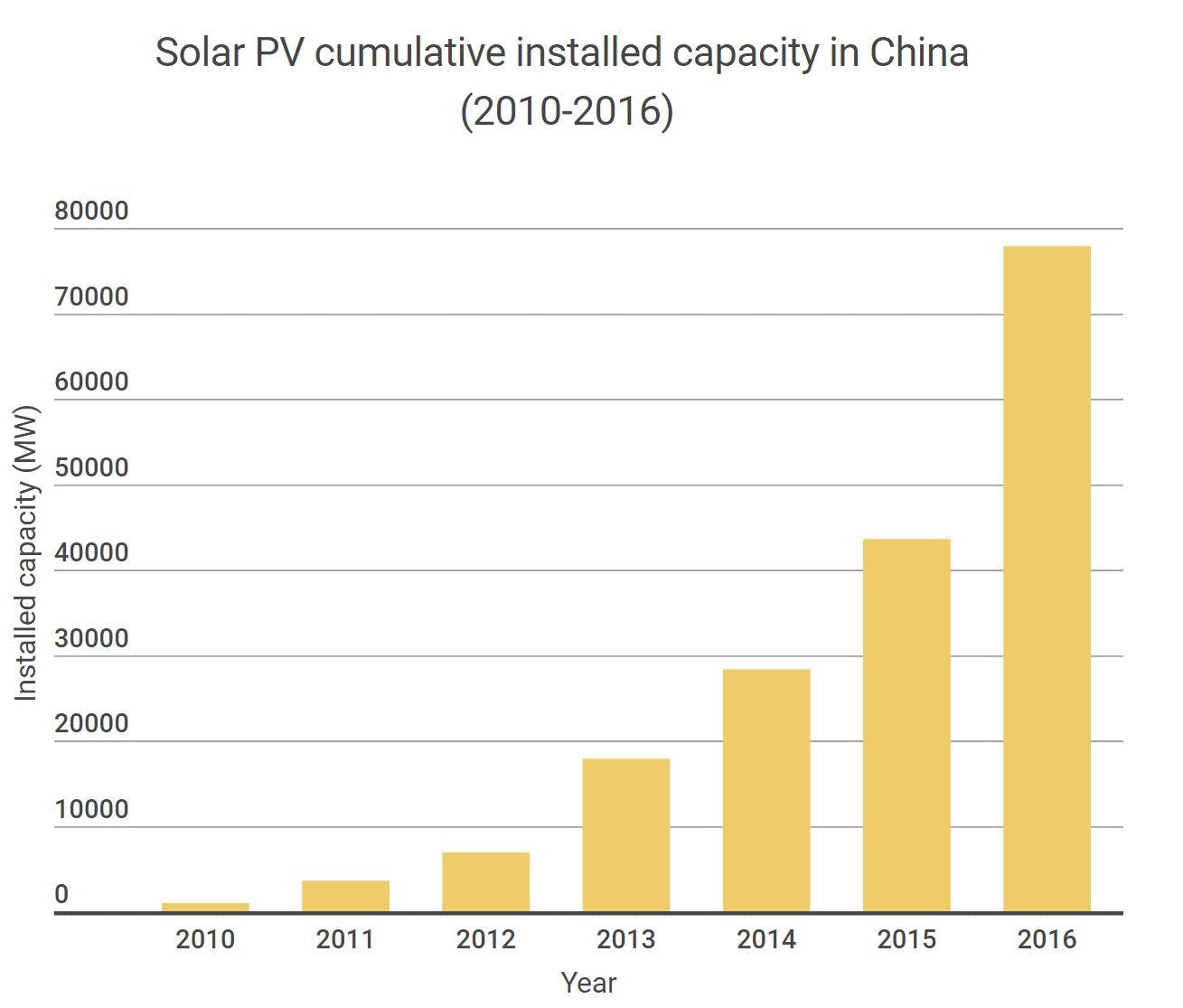 Why not clean the panels more?

Although there’s no single approach to cleaning solar panels in China, most solar farms clean once power output falls below a certain point.

Cleaning not only maintains power output, it also prevents panel damage from accumulated dust that can result in overheating and hot spots, which reduces lifespan.

But while China’s north-west has plenty of sunshine, it doesn’t have a lot of water. Geng Wenqiang said the large volumes needed make cleaning expensive so operators have to weigh up those costs and the extra income they can expect from higher power output.

But it is distributed solar, such as rooftop installations, that suffer from efficiency drops most as these get far less maintenance than utility-scale solar farms, typically being cleaned only by rain or snow.

Zhang admitted that for investors, the impact of smog on solar panel efficiency is a key risk that is factored into investment decisions.

This is echoed by Andre Nobre, head of operations at Singaporean firm Cleantech Solar. He told the Times of India that firms are cautious about signing agreements to buy power from solar farms in highly polluted areas.

However, Zhang explained that for the government, policy support often overrides these industry concerns. The pressure to improve air quality in polluted areas is leading local governments to promote utility-scale and rooftop solar installations as the solution.

In Baoding, which is known for its severe air pollution, the local government produced a low-carbon plan that included the ambition of becoming a “solar city”, turning Taixingshan district to its west into a “solar valley”.

If successful, that plan would go some way to reducing smog in the Beijing-Tianjin-Hebei region.

Of course, a better alternative to regular cleaning of panels is to minimise the particulate matter that reaches the atmosphere.

Ni Jianxiong said that the problem of particulates is a short-term one, and that reducing air pollution is not impossible if real efforts are made. The city of Datong, for example, was built on coal mining but now has air quality to be proud of.

Unlike in India and on the Arabian Peninsula, solar power in China is affected primarily by anthropogenic particulate matter, so there is more potential for the government to help by reducing emissions and pollution.

There are a range of options it can choose, including fuel choices, emissions pricing and preferential policies for renewables. The benefits would be significant – alongside improved solar power generation there could be major improvements to human health, as particulate matter is a risk to health when inhaled.

“If you really did the economic analysis of these things, you would find that this is yet another reason why the apparently cheap, but very dirty fossil fuels are actually not so cheap,” said Shindell.