Investors in renewable energy got "more bang for their buck" as clean technology got cheaper last year, a new report published by Frankfurt School-UNEP Collaborating Centre and the Bloomberg New Energy Finance showed.

The world added record levels of renewable energy capacity in 2016, even as investment in clean energy fell, the United Nations Environment Programme (UNEP) reported on 6 April.

“Ever-cheaper clean tech provides a real opportunity for investors to get more for less,” said UNEP executive Director Erik Solheim. “This is exactly the kind of situation, where the needs of profit and people meet, that will drive the shift to a better world for all.”

The report, Global Trends in Renewable Energy Investment 2017, found that wind, solar, biomass and waste-to-energy, geothermal, small hydro and marine sources added 138.5 gigawatts to global power capacity in 2016, up from 127.5 gigawatts added the year before.

According to the press release, this difference is roughly equals to the energy created from the world’s 16 largest existing power producing facilities combined.

Another key finding is the decreasing cost of clean energy, as compared with traditional fuels. For example, the average dollar capital expenditure per megawatt for solar photovoltaics and wind dropped by over 10 per cent.

This is exactly the kind of situation, where the needs of profit and people meet, that will drive the shift to a better world for all.

This meant that investors got “more bang for their buck,” according to UN Environment, which published today’s report along with the Frankfurt School-UNEP Collaborating Centre and the Bloomberg New Energy Finance.

“Investment in renewables capacity was roughly double that in fossil fuel generation,” the UN programme said.

While the capacity from renewables was equivalent to 55 per cent of all new power, the highest to date, total investment was $241.6 billion, the lowest since 2013. 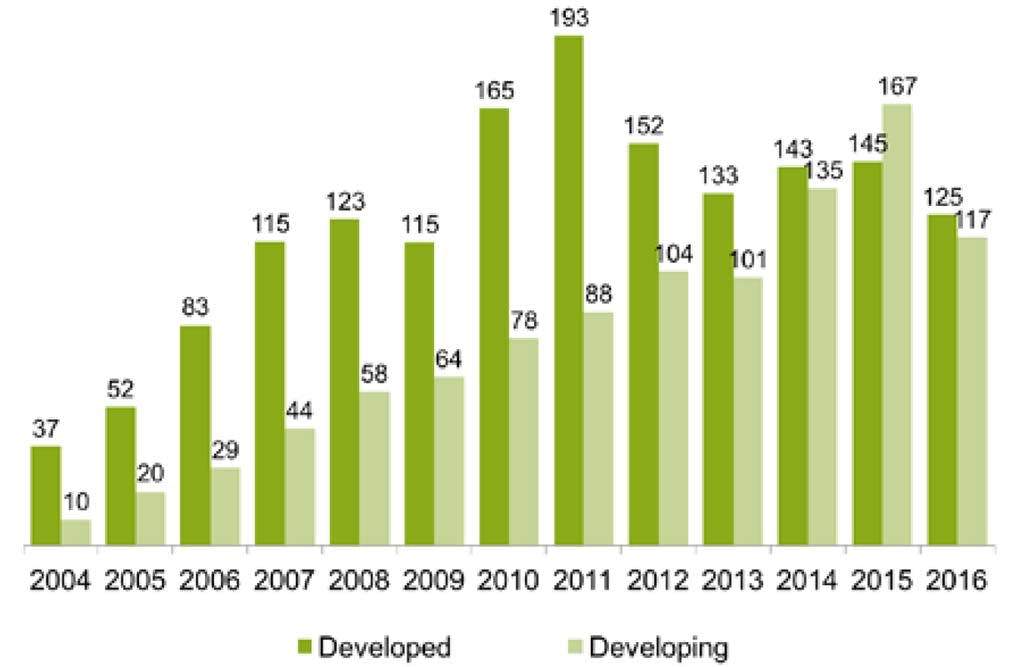 The authors noted drops in investment among developing countries, including in China where investment had been rising the past 11 years. Investment in offshore windmills in China, however, peaked at $4.1 billion.

Meanwhile, in Europe, investment rose, led by the United Kingdom and Germany. The continent’s investment in renewables overall rose three per cent to $59.8 billion.

The most hopeful sign last year for the future greening of the global electricity system was a succession of winning bids for solar and wind, in auctions around the world, according to the report.

Records were set for solar power in Chile and onshore wind in Morocco.