Chinese solar and energy storage powerhouse BYD has launched a new line of residential and commercial battery systems in Australia, offering consumers yet another way to store excess solar energy and cope with high electricity prices or power cuts.

BYD, which stands for Build Your Dreams, unveiled its B-Box Battery Energy Storage System at Sydney’s Museum of Contemporary Art on Wednesday.

Launch event marks BYD’s first major foray into Australia’s energy storage sector, a market that is expected to double in size every near from now till 2018. A 2016 report by research group IHS estimates that there will be more than 30,000 Australian homes with solar and energy storage systems by 2018.

Julie Chen, global sales director, BYD Batteries, told Eco-Business on the sidelines of the launch event that the firm chose to enter the Australian market because the country is one of the world’s biggest markets for residential solar projects, and has abundant sunshine.

She added that she is optimistic that the company will realise its ambitious plans for its B-Box systems—it aims to capture 25 per cent of the energy storage market—because of the product’s unique chemistry, safety, and its modular, scaleable nature.

The B-Box range comes in a low-voltage model that is suitable for residential use, and a high-voltage variation that can be installed in homes and commercial facilities.

The HV Series consists of a modular structure that can accommodate between five and nine battery units. Its capacity ranges from 5.6 kilowatt hours (kWh) to 10.08 kWh, and customers can install up to five systems in parallel, bringing the maximum capacity to about 50kWh.

The LV model, meanwhile, can be fitted with up to four modules, each with a capacity of 2.56 kWh. Up to eight systems can be installed in parallel, offering a maximum capacity of 80 kWh. 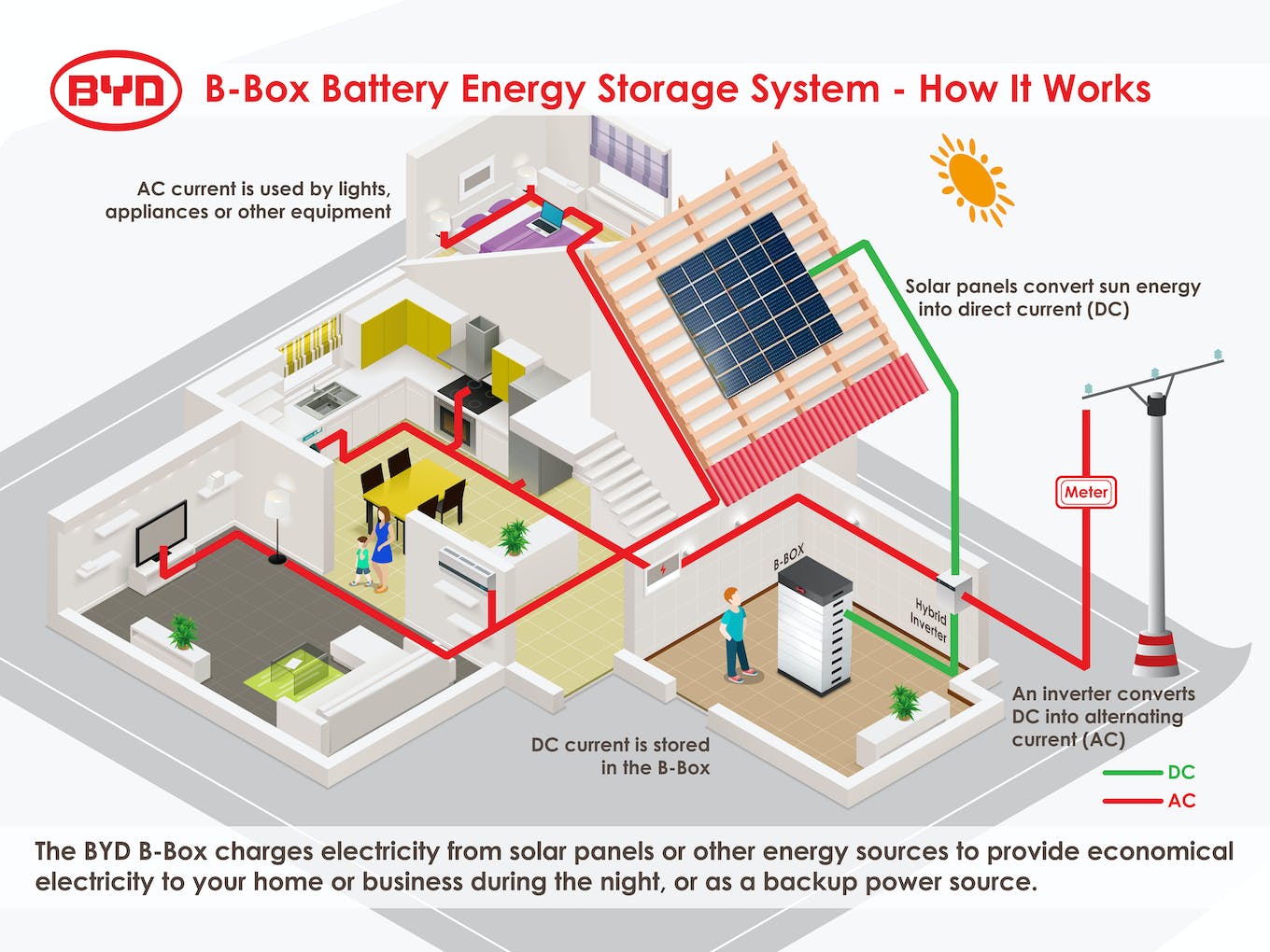 Chen shared that the B-Box system uses a proprietary lithium iron phosphate battery chemistry that is safer and cleaner than the lithium and cobalt or nickel combinations used by other battery manufacturers. The company has also patented a production line process that ensures the consistency and quality of each battery.

BYD, which is headquartered in Shenzhen, China, also has a long history of manufacturing electric vehicles. Recent examples include a fleet of electric buses at the Sydney Airport and a research partnership with Singapore’s Institute for Infocomm Research to develop autonomous electric vehicles.

Feed-in tariffs refer to the payment made by electricity retailers to households with rooftop solar when they feed excess energy back to the grid. Many Australian states, in a bid to encourage the widespread adoption of solar energy, offered generous tariffs to consumers in the early 2010s, sometimes as high as twice or thrice the prevailing electricity prices. But these tariffs have now been removed, or diminished significantly.

In New South Wales, for example, the government in 2009 announced a Solar Bonus Scheme which offered a tariff as high as 60 cents/kWh; but payouts under this scheme ended in December 2016.

“For families who have solar systems at home but have lost their feed-in tariffs and are considering what to do next, storage is a really good option,” said Chen. They can initially make a small investment in a 2.56 kWh low voltage system, and scale it up by installing additional modules in the future, she added.

BYD aims to clinch about 25 per cent of the market share for storage systems in Australia in a year, and will sell its B-Box range in Australia through four distributors: Sol Distribution, RF Industries, 360 Energy, and Solar Australia.

Richard Smaldino, chief executive officer, 360 Energy, shared that the company decided to sign up as a distributor of BYD products because of the system’s safety credentials, the 10-year warranty on the systems, and the availability of good after-sales support services.

“The fact that BYD build electric vehicles also means they have a very stringent testing programme for quality and safety,” he said.

Smaldino added that his company aims to sell between 5,000 and 10,000 units over the next year, with key markets being Newcastle in New South Wales and South Australia. Newcastle has been affected by the end of the state feed-in tariff scheme, while South Australia has suffered repeated blackouts in the past few months.

Last September, a massive storm destroyed electrical power lines in South Australia, causing a blackout in almost the entire state; a few months later in December, about 155,000 properties lost electricity when another storm hit the state. This January, 40,000 households and businesses were once again hit when the Australian Energy Market Operator ordered a rolling blackout across the state to reduce the stress on the power system during a heatwave.

Experts have widely noted that on-site energy generation and storage are key ways to improve energy reliability and reduce electricity bills in such areas.

For users looking to retrofit batteries into existing solar systems, Smaldino shared that prices would likely start at about A$8,500 for a 5 kWh system, while customers wanting to install a new system comprised of solar panels, inverters, and the B-Box batteries could expect to pay between A$13,500 to A$17,500 for the system. In comparison, a 14kWh Tesla Powerwall battery costs about A$8,000.

She added: “Ideally, the B-Box can be integrated to a fully sustainable energy-independent enterprise or lifestyle, enabling its users to reduce reliance on electricity from burning fossil fuels”.