Compared to their global and regional counterparts, China’s coal giants have no clear strategies in transitioning to clean energy, despite government mandates on capping coal use, a Singapore-based consultancy firm found.

China’s biggest coal plants are not moving fast enough in the country’s transition towards lower reliance on fossil fuels, new research has revealed.

In 2016, prompted by worsening air pollution and overinvestment in coal power throughout the country, President Xi Jinping launched an ambitious energy plan to cut capacity in the coal sector.

But a report released on Monday by Singapore-based sustainability consulting firm Asia Research and Engagement showed that China’s top six listed coal energy generators are providing scant information on how they are adapting their strategies in line with the energy transition.

The report, Tracking the Transition, reviewed six leading Chinese energy companies which have a combined market capitalisation of almost US$94 billion, along with 11 coal-intensive companies based elsewhere in Asia and the rest of the world.

To assess how the firms are adjusting their businesses to climate risks, the report examined 13 disclosure items including actual targets for renewable capacity, concrete timelines for a complete halt of coal-fired capacity growth, and reporting of current emissions. The number of items that each company discloses is tracked and an average score is computed. 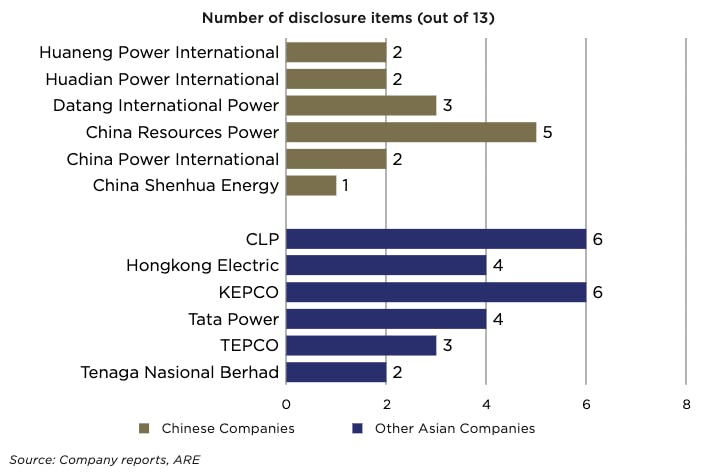 The average score of 2.5 among Chinese power companies was lower than the score of 4.2 for other Asian companies and 7.4 for international leaders.

Among the six Chinese companies surveyed, China Resources Power provided the most information with a disclosure score of 5.0, which included setting targets for renewable energy generation—the only one to do so. The firm’s annual report showed that it aimed to grow its clean energy business, primarily in wind power, to approximately 28 per cent by 2020.

China Shenhua Energy, which holds the biggest share in market capitalisation, reported its greenhouse gas emissions, but that was the only disclosure item among the 13 required in the study. Among the six energy companies, it was the only one that did not list climate change and greenhouse gas management as a “material issue” or recognise that its business may be affected by global warming.

These companies emit vast quantities of greenhouse gas emissions but are failing to align their businesses with a rapid energy transition required both at home in China and around the world.

The companies, which supply 20 per cent of China’s power and were responsible for almost 3 per cent of the world’s carbon emissions in 2017, also lag the country’s broader power industry on transitioning to renewables at scale.

The report noted China’s aggressive investment in renewable energy. Its total wind and solar power generation for 2018 represented 7.8 per cent of the world’s total. But renewables averaged only 3.7 per cent in the six companies’ energy portfolio, according to the report.

“These companies emit vast quantities of greenhouse gas emissions but are failing to align their businesses with a rapid energy transition required both at home in China and around the world. This puts the companies out of step with the direction of government regulation,” said Benjamin McCarron, managing director of Asia Research and Engagement.

Divestment from companies that lack transparency

Chinese companies will face increasing challenges with international investors if they provide inadequate information on how their firms are adapting to climate change, said McCarron, who is one of the report’s authors.

As they are listed on the Hong Kong Stock Exchange, it is a “major concern for international investors which remain highly exposed”, McCarron told Eco-Business.

The listed power companies will not grow and or have access to profitable opportunities as it will become harder for them to convince international investors to buy their shares or debt, he added.

McCarron called on investors to be assertive in asking companies how they are developing portfolios resilient to climate change, and consider divesting from companies that do not set clean energy targets.

“Where companies are unwilling to set a timeline for change, investors should take a series of stronger steps, such as voting against reporting, debt issuance and capital spending plans and seeking to replace boards that are failing to set appropriate strategy,” he said. “Divestment should also be a consideration where companies do not respond with a timeline for meaningful improvement.”