But China’s cloud providers and data centre firms are making uneven progress to reduce their emissions, with only about a half of the country’s biggest web services firms actively purchasing renewable energy to lower their carbon exposure, according to a report by environmental group Greenpeace, published on Wednesday (21 April).

Tech firms matter to China’s energy transition story. Data centres account for 2 per cent of China’s electricity consumption, and their energy use is projected to grow by more than two-thirds from 2019 to 2023, when it will exceed the annual energy consumption of Australia.

The Covid-19 pandemic has driven an increase in China’s internet population to almost one billion — one fifth of the global total — as millions more Chinese work, shop and watch videos online, putting more pressure on the country’s data centre infrastructure. 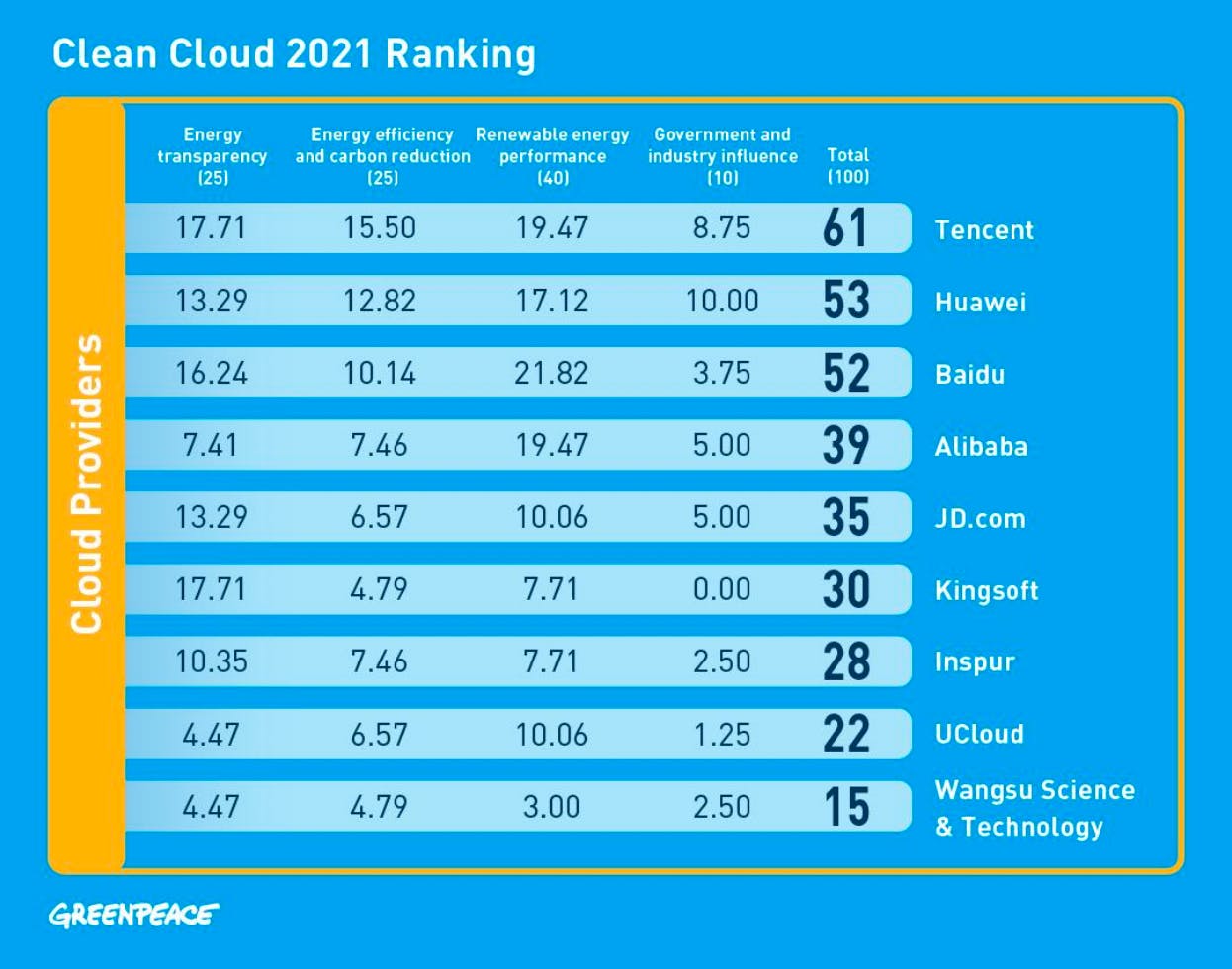 In Greenpeace’s ranking of China’s “clean cloud” providers, Tencent, the owner of chat app WeChat, emerged as the Chinese tech sector’s decarbonisation frontrunner, ahead of Huawei and Baidu. Tencent rated highly for transparency, increasing renewable energy procurement and a declaration that it would work toward carbon neutrality.

Alibaba, China’s biggest technology company and one of the world’s largest e-commerce firms, slid down the ranking introduced last year into fourth, rating poorly for clean energy use and transparency. Alibaba has yet to follow the government’s lead in setting renewable energy and carbon neutrality targets.

Chindata was ranked as China’s top data centre operator. It is the only Chinese tech company to pledge to achieve carbon neutrality by 2030. Last year, Chinadata committed to developing 1.3 gigawatts of wind and solar projects in Shanxi and Hebei provinces, making it one of the top three renewable energy buyers globally. 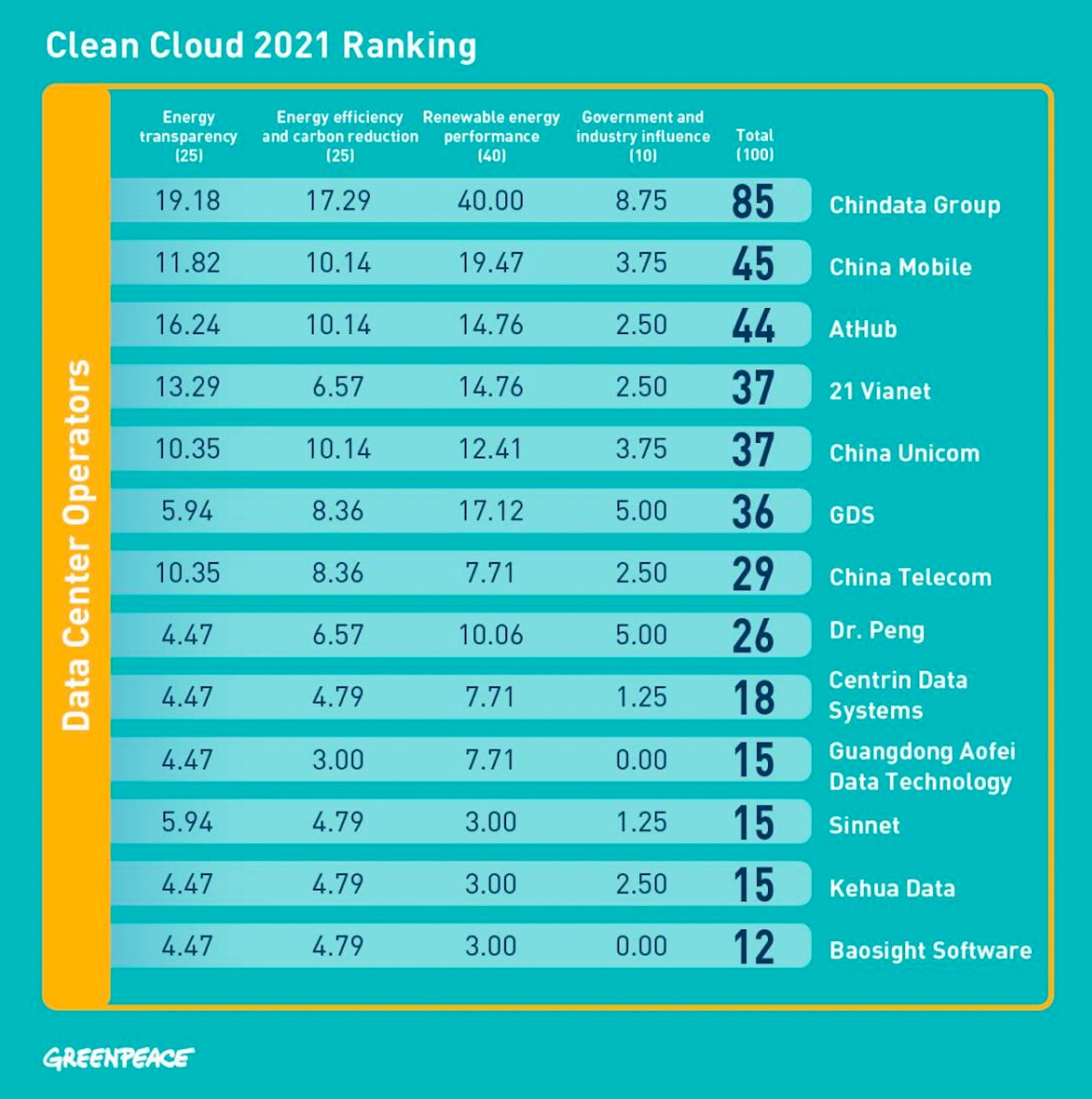 Chindata is one of only two Chinese tech companies that have recorded renewable energy usage rates higher than 3 per cent, the other being Baidu.

In its report, Greenpeace urged China’s web firms to set targets for 100 per cent renewable energy use and achieve carbon neutrality by 2030. The environmental group said that carbon offsets were “not a substitute” for the reduction of fossil fuel emissions, adding that firms must scale up procurement of wind and solar energy, and actively disclose energy use data and greenhouse gas emissions data.

“Especially when we consider that China’s biggest tech company, Alibaba, and its biggest independent data centre operator, GDS, have yet to issue renewable energy or carbon neutrality commitments,” she said.

Ye noted that China’s pledge to reach carbon neutrality by 2060 should spur Chinese tech giants to commit to carbon neutrality, aided by the falling cost of renewables. The levelised cost of electricity (LCOE) for solar and wind power is already cheaper than gas-fired power in China, and is expected to be competitive with coal by 2026.

As of 2018, China’s data centres were 73 per cent powered by coal, the largest source of man-made carbon emissions, and consumed an estimated 161 billion kilowatt-hours of electricity — more than the consumption of Malaysia.