Hong Kong's newly sworn-in Chief Executive Carrie Lam wants to turn the territory into a green finance and infrastructure hub. But while doing so will be a big win for Hong Kong, there are many challenges standing in Lam's way, say experts.

Hong Kong’s new leader Carrie Lam has vowed to push ahead with an ambitious raft of green finance and sustainability initiatives, but as she takes office on July 1, experts say that there are many challenges she must overcome to deliver on this promise.

The chief executive, who takes office on the 20th anniversary of the British handover of Hong Kong to China, pledged in her election campaign manifesto to make the most of Beijing’s “Belt and Road Initiative” and develop the city into a “pioneer of green finance.”

Hong Kong certainly has the potential to fulfil these ambitions, say experts. But, they warn that the territory will have to step up its efforts on sustainability awareness, upgrade its infrastructure and fuel innovation to do so.

The special administrative region already has a strong foundation on which to build its green finance plans. Not only is it an established financial hub and the world’s leading IPO market, it has been ranked the world’s freest economy for 23 years by American thinktank Heritage Group. 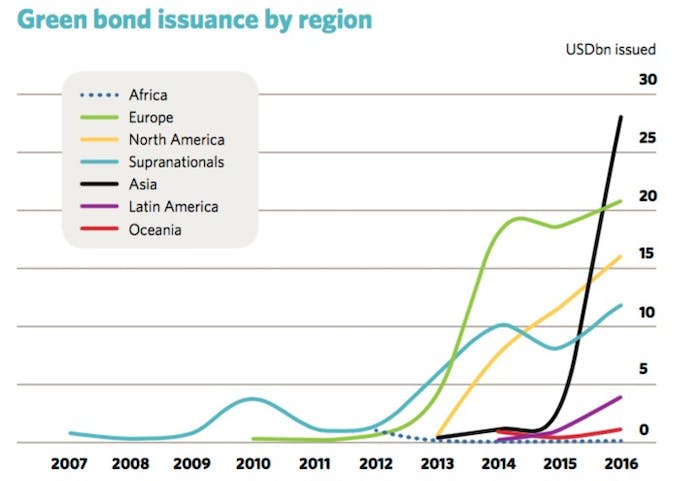 Global green bonds growth trends. Most of the growth in green bonds is in Asia, and specifically China and Hong Kong. Source: Climatebonds.net

Momentum is already building in this space. Two Hong Kong companies have issued green bonds, the latest being rail operator MTR, which is majority owned by the government. The two offerings come as the market for green finance is booming, with China needing US$300 billion each year to finance its transition to a green economy.

As Tim Freshwater, Chairman of Goldman Sachs Asia Bank put in a recent address to the Asia Financial Forum, as international financial center for China, “it’s up to Hong Kong to take this opportunity to be the providers of that finance.”

“The MTR has led the way,” Freshwater adds. “I hope other corporations in Hong Kong will follow them.”

But while the MTR is considered a standout company for its commitment to social, economic and environmental sustainability, Carlos Lo,  director of the Sustainability Management Research Centre at the Hong Kong Polytechnic University (HKPU) notes that 98 per cent of  firms in Hong Kong are small to medium in size and they “lack the knowledge of CSR and are unsure how to undertake it.” 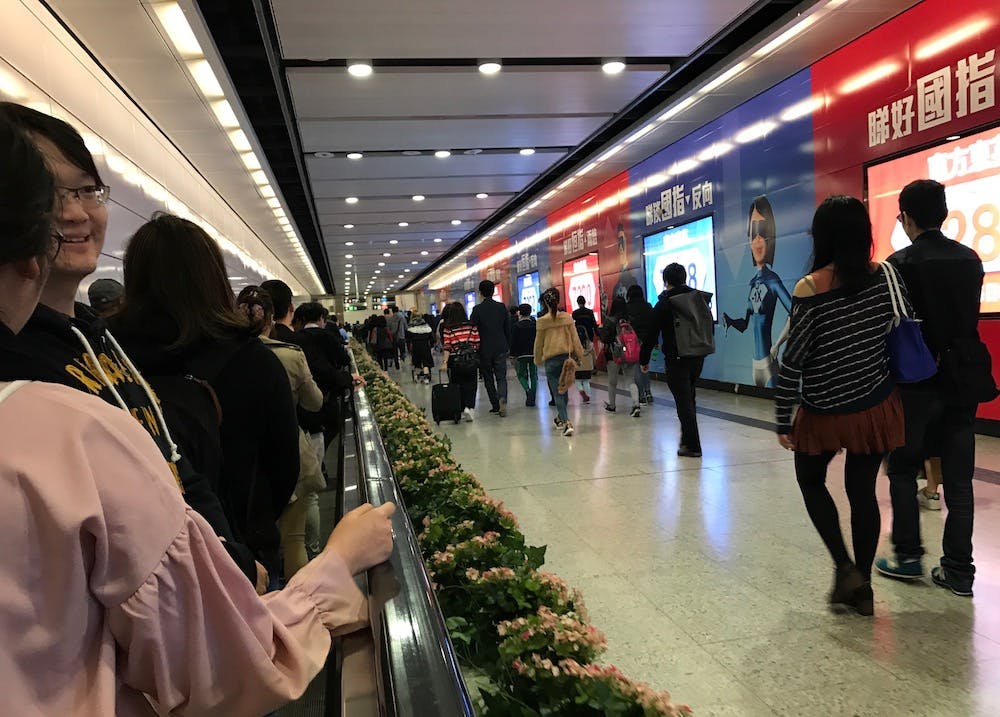 The MTR will use the $US600 million bond to invest in green projects under its Rail Gen 2.0 plan. Image: Marianne Bray

Global sustainability rankings attest to this: In the 2016 Dow Jones Sustainability Asia Pacific Index, for instance, only eight out of 146 companies are from Hong Kong; the list includes MRT and Swire. And only Hang Seng Bank makes the 2017 Corporate Knights Global 100 Most Sustainable Corporations index.

To address these obstacles to making Hong Kong a green hub, experts say that Lam will need to set out a clear and coherent vision and strategy for Hong Kong’s overall sustainability, and she will need to drive change, rather than focus on initiatives and studies that have been the norm in the past.

The good news is, there are already measures in place to boost awareness. Since January 2016, Hong Kong Stock Exchange firms must say whether they have complied with Environmental, Social and Governance (ESG) reporting. If they don’t comply, they must explain why not. From January 2017, they need to report on 12 environmental indicators, among them greenhouse gas emissions.

Lam has also said she will look at giving big tax deductions to spending on environmental protection initiatives. But experts like HKPU’s Lo say she could take it further, making it compulsory for companies who go to IPO to be assessed for their CSR initiatives.

Other challenges abound for Lam. Whilst Hong Kong has one of the world’s greenest transport systems, it lags behind other Asian cities when it comes to innovation, and R&D into technologies that can deliver sustainable outcomes.

In 2014, Hong Kong spent 0.7 per cent of its GDP on R&D while Singapore stood at 2 per cent and Seoul above 4 per cent. In a bid to change this, the city set up the Innovation and Technology Bureau in 2015. It said the environmental market — estimated to reach US$11.6 billion by 2018 —  is one of six sectors with “potential.”

The government supports green startups through funding, tax incentives and incubator slots at the Science and Technology Park, a non-profit statutory board it administers that seeks to transform the city into an innovation hub. Among these is a project that recycles glass into bricks and another that converts food waste into biodiesel.

To up the ante, Lam said in her manifesto that she would push ahead with the Hong Kong-Shenzhen Innovation and Technology Park, which will be four times larger than the city’s current park. She would also make Hong Kong a “smart city,” using the industrial hub of Kowloon East as a test-bed.

The building sector also has a huge opportunity for innovation; it accounts for 90 per cent of all electricity consumption in Hong Kong, and property companies lead the search for solutions that reduce energy and resource consumption.

Property conglomerate Swire Group, for instance, is building the city’s first waste-to-energy system in a tower at One Taikoo Place. It will use waste cooking oil to produce electricity.

“With the overlap of the IOT (Internet of Things), big data and energy-efficiency knowledge, Hong Kong could be an innovation centre across the board,” says Bruce Hicks, chairman of China-based solar firm Asia Clean Capital.

The sector has been given a push by the government’s decision to cut carbon intensity 65 to 70 per cent by 2030 (using 2005 as base). The city’s Action Plan 2030+ report says Hong Kong would phase out coal with natural gas, boost renewables and promote energy-efficiency.

Land scarcity and waste management are also pressing issues in this city, where 7.3 million people are squeezed onto 1,106 square kilometers. 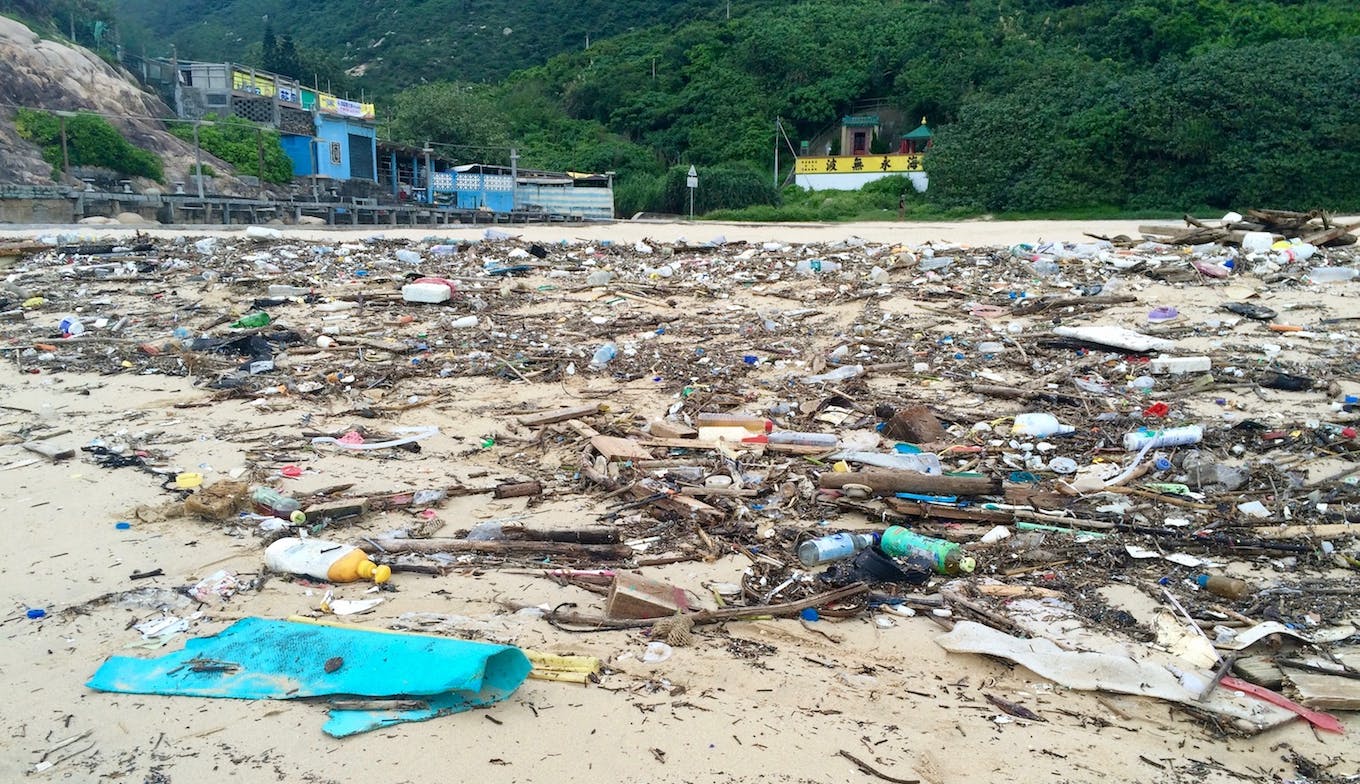 Growing trash rates came under the spotlight when rubbish piled up on beaches around Hong Kong in June 2016. Image: Marianne Bray

To address its waste woes, the government is following the example of Asian cities Seoul and Taipei and charging. Consumers already pay for plastic bags at shops. Producers will begin paying for e-waste in a scheme the government is implementing in phases over 2017 and 2018, whilst glass producers will start paying “as soon as practicable.” Lam’s administration will charge consumers and businesses for their municipal solid waste in 2019, if a bill before the legislative council is passed.

The government is also building waste processing infrastructure. For instance, it set up Eco-Park in Tuen Man in 2007 to promote waste recycling businesses. It has also built a waste-to-energy sludge treatment facility in the same area called T-Park, which opened in 2016.

Plans are afoot to build up to six organic waste treatment facilities to deal with the city’s high food waste, with the first expected to be commissioned in 2017. The city’s first e-waste plant is also set to open later this year. The government is also planning a mega-incinerator to the south of Lantau Island, a move that has sparked protests.

Looking ahead, experts say Lam will need to push bigger green concepts — like the circular economy and zero waste – as well as address social issues like affordable housing for a truly sustainable Hong Kong.

The public sector veteran will need to push through policies and laws which “create a seismic shift in attitudes so that Hong Kongers value the environment, and consume and invest responsibly to make a difference in what has to be the equivalent of a wholesale war on pollution, waste and climate change,” says Copeland.