Fossil fuels kill more people than smoking, so fossil fuels advertising should be restricted like tobacco ads are, campaigners say. Leading health organisations have given their support to a ban on dirty energy ads.

A publicity campaign launched in Australia to pressure the government and media companies to remove advertising for fossil fuels products from public spaces has been backed by leading healthcare organisations.

The campaign declares that fossil fuels are the main driver of global warming and air pollution from their combustion kills 8.7 million people a year globally — a number higher than the death rate from tobacco, so fossil fuels advertising should be restricted as tobacco ads are.

Initiated by Comms Declare, a non-for-profit coalition of communications industry executives pushing for a ban on fossil fuels ads, the FossilAdBan.org campaign has the support from member organisations of the Climate and Health Alliance, including the Australian Healthcare and Hospital Association, the Australasian Epidemiological Association, and Doctors for the Environment Australia. 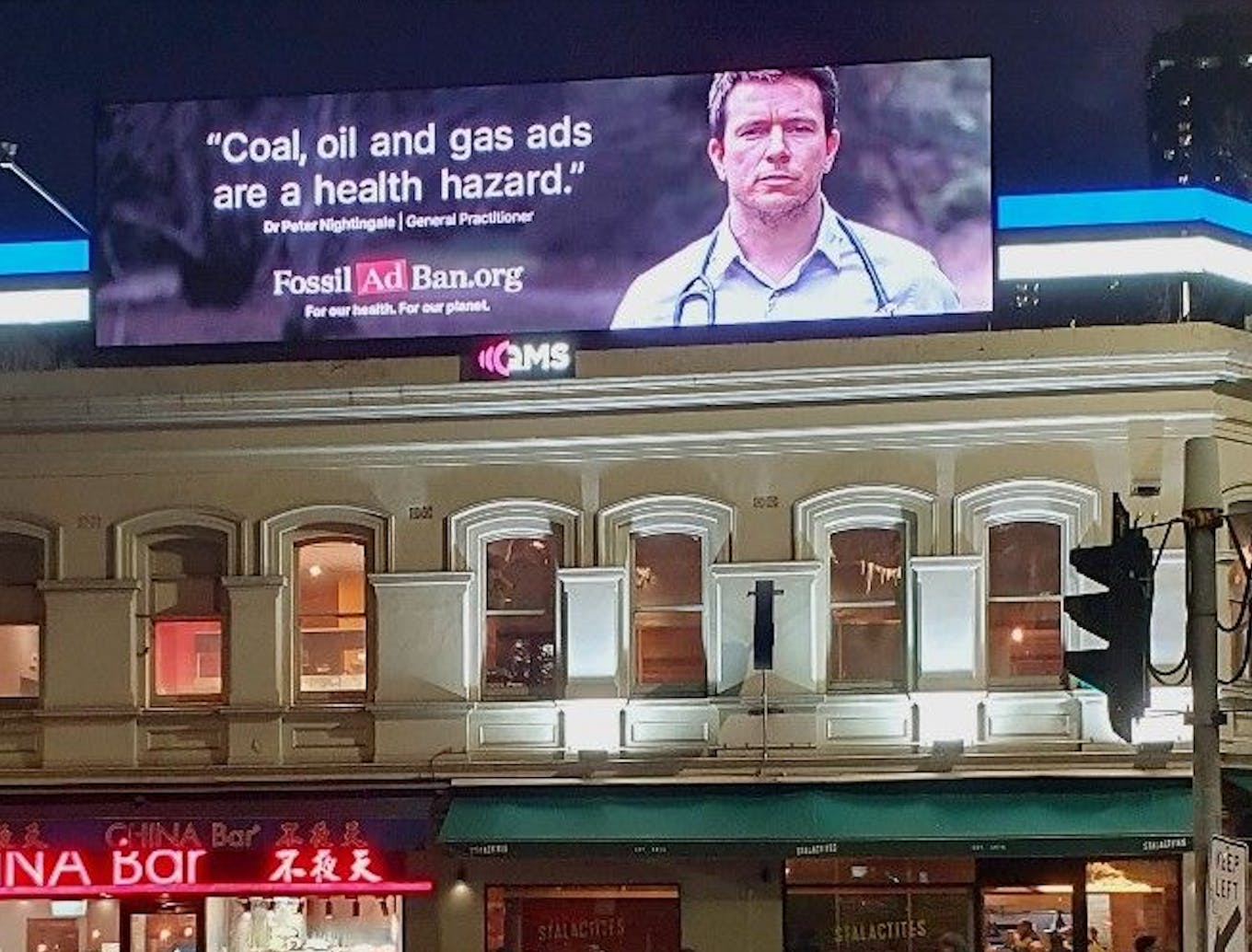 It dovetails with an open letter signed by 195 healthcare professionals, including surgeons, general practioners, nurses and professors of public health from Australia’s major universities, to Australia’s prime minister and the country’s mayors calling on state and federal governments to ban fossil fuels advertising.

“Australia was a world leader in restricting tobacco advertising for the public good, and we can stop the promotion of high-emission products for the same reason,” said Belinda Noble, founder of Comms Declare.

Australia — one of the world’s biggest fossil fuels producers and exporters — is the first country in Asia Pacific where activists have taken aim at advertising for its role in exacerbating climate change by promoting fossil fuels consumption. It was also the first country in the world to introduce plain packaging on cigarette packets in 2012, to make tobacco a less attractive consumer product.

Noble said that Australia’s newly elected centre-left government, which ousted a pro-fossil fuels conservative administration in May, had an opportunity to ban dirty energy ads as “an obvious next step … to acknowledge the significant health impact climate change is already having on our children and community”.

Advertising fossil fuels serves no purpose other than to increase demand for the products that are driving climate change and harming our community.

Regulators have started to introduce restrictions on fossil fuels advertising in France, United Kingdom and the Netherlands, and curbs are being debated in the United States, Sweden and Canada, Noble noted. 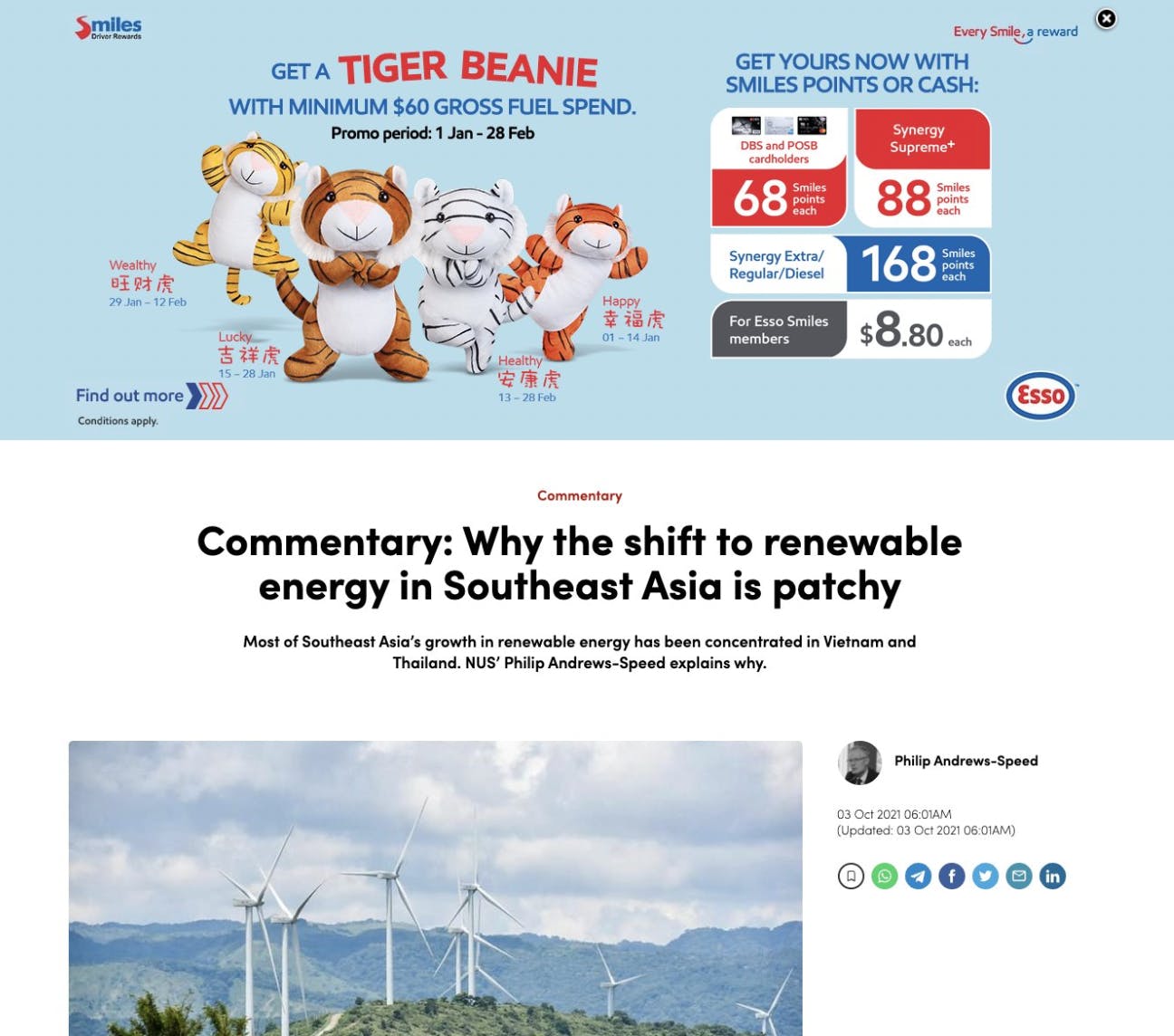 An ad for ExxonMobil’s Esso brand above a story on Singapore’s Channel NewsAsia about Southeast Asia’s slow shift to renewables. There are no restrictions on fossil fuels advertising in Asia.

In June last year, a quarter of a million people signed a European Citizen Initiative to ban fossil fuel ads and sponsorships in the region.

London-based activist law firm ClientEarth is calling for tobacco-style public health warnings on fossil fuels ads and sued British oil major BP in 2020 over misleading claims the company made in its advertising.

Yarra City, a local government area in the state of Victoria, became the first council in Australia to move to restrict the promotion of fossil fuels on council-run property in March.

There are no restrictions on fossil fuel advertising anywhere in Asia. However, students in Singapore rallied against fossil fuels firms such as ExxonMobil, Shell and BP sponsoring university programmes last year.

However, none of the communications industry’s biggest networks such as WPP, Interpublic, Dentsu and Publicis Groupe have moved to trim carbon-intensive companies from their client lists.

A report published by Comms Declare and US-based non-profit Clean Creatives in September last year found that despite commitments from the biggest ad firms to green their operations, all of them have fossil fuels clients that undermine their decarbonisation pledges.