As Australia prepares to unveil a progress report on how it is faring on delivering the SDGs, experts at a recent event in Sydney said that policymakers are failing to address critical shortcomings in its progress against the goals.

Australia has slipped lower on the global ranking of how countries are progressing on the Sustainable Development Goals (SDGs), and the country’s government needs to accelerate action to meet the goals, said non-government and private sector experts at a recent event in Sydney.

Speaking at a seminar titled Sustainable Development Goals: From Words to Actions and organised by the United Nations Association of Australia (UNAA) on February 27, leaders from civil society and academia said that some of the areas that Australia needs to improve on are zero hunger, climate action, and partnerships to achieve the goals.

The SDGs are a set of 17 targets that were developed by the UN in consultation with governments, civil society and business leaders, and adopted by the global community in 2015. With a 2030 deadline, they include targets to end poverty and hunger, achieve gender equality, and protect life on land and in water.

Speaking to an audience of about 100 guests, SDG consultant Jane Fulton noted that Australia has slipped to the 26th spot on the annual SDG Index and Dashboards Report 2017, which ranks 157 countries and was produced by the Sustainable Development Solutions Network (SDSN) and German foundation Bertelsmann Stiftung. In 2016, Australia ranked 20th.

The latest edition, released last July, scores Australia poorly on indicators related to obesity in the adult population, climate action, and the health of ocean and land ecosystems. It also received a poor score for carbon emissions from fuel combustion and the share of renewable energy in electricity consumption, as well as energy-related carbon emissions per capita.

“When it comes to climate action, Australia has been slow to recognise fossil fuels as a problem,” Fulton told Eco-Business in a subsequent interview. “It is still exporting vast quantities of fossil fuels, and even proposing new fossil fuel extraction projects such as the planned Carmichael coal mine by Indian resources giant Adani.”

Instead of this, “the government can support clean energy and stop subsidising fossil fuels,” said Fulton. 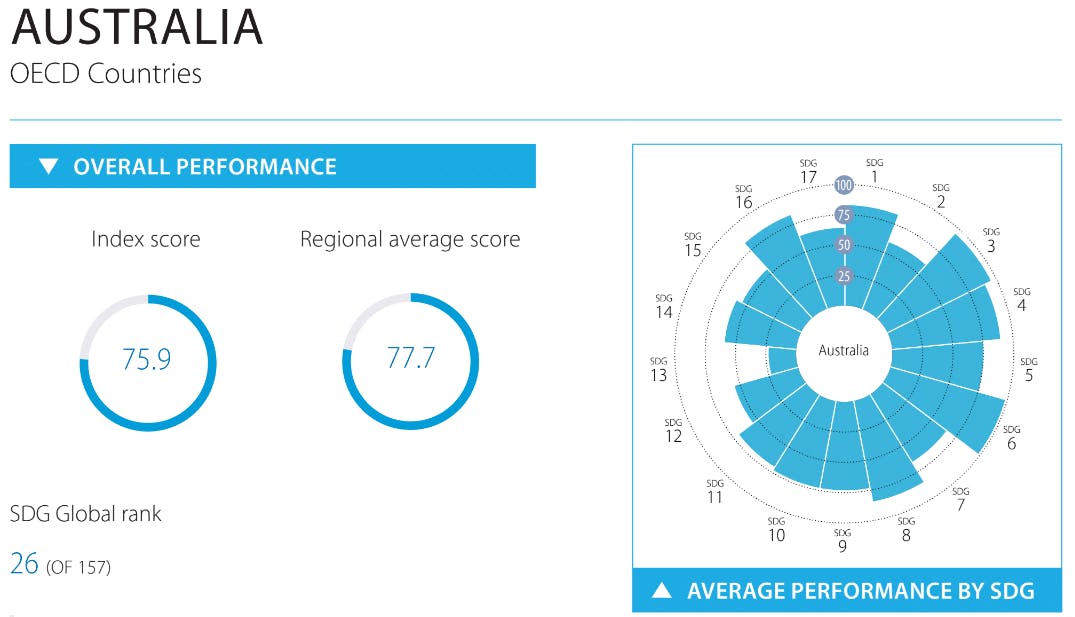 A snapshot from the SDG Index and Dashboards Report on how Australia is performing on the SDGs. Image: SDSN

Fulton added that Australia needs to do better on SDG 5 (gender equality)—according to the Australian Bureau of Statistics (ABS), one in five women have now experienced sexual violence since the age of 15—for men, this statistic is one in 20. “To the credit of the Prime Minister, he is aware of this and has been vocal about it,” Fulton said.

The country also has a significant wage gap, noted Fulton. According to the Workplace Gender Equality Agency, Australia’s national gender pay gap is 15.3 per cent, and has hovered between 15 per cent and 19 per cent for the past two decades.

Another area that Australia could improve on is its spending on overseas development assistance, said Fulton. According to the Organization for Economic Co-Operation and Development (OECD), Australia spends 0.25 per cent of its Gross National Income on international aid—well short of the UN target of 0.7 per cent, and significantly lower than countries like Sweden, Luxembourg and Norway, which spend 1 per cent on aid.

But even as it works to improve performance on specific goals, broader and systemic change is needed to improve Australia’s overall performance, Fulton said, pointing out that an instance of policymakers ignoring the goals was the fact that the Greater Sydney Commission—helmed by Lucy Turnbull, wife of Australian Prime Minister Malcolm Turnbull—makes no mention of the SDGs in its plan for future developments in Greater Sydney, Australia’s largest city.

This is despite the fact that Sustainable Cities is one of the SDGs.

In a previous public response to the plan, UNAA pointed out that the plan’s failure to address the SDGs means that there isn’t enough emphasis on the interconnected nature of objectives such as health, education, economy, environment, and community involvement.

However, since UNAA’s submission, Fulton shared that the chief executive officer of the Greater Sydney Commission has responded to UNAA’s submission by requesting a meeting to discuss the SDGs.

“We also have to be good at collecting data, as we need baselines to track progress,” urged Fulton. “It’s boring, but it’s really important.”

To address this point, panellist Ryan Neelam, deputy director of the New South Wales State Office of the Australian Department of Foreign Affairs and Trade, shared that the government will be publishing its first Voluntary National Review on the SDGs at the UN High Level Political Forum this July.

The process of putting together this report is a national effort, and 18 government agencies are asking relevant stakeholders for feedback, shared Neelam, adding that the ABS is working on developing a system to quantitatively track progress against the goals.

The government agency is also conducting an inquiry into the SDGs, and seeking feedback on issues such as the costs, benefits, and opportunities for Australia to implement the SDGs, how performance can be monitored and communicated, and international best practices that Australia can learn from. This inquiry is open for public submissions until March 29.

But despite these efforts, ultimately “it’s not just about governments this time,” said Neelam—a reference to the now-retired Millennium Development Goals, which were largely confined to the purview of governments.

“Everybody can make a contribution,” he said.

When it comes to the potential of business to contribute to the goals, Fulton noted that broadly, the issue is gaining traction in the private sector, with an increased number of consumer products touting sustainability credentials.

She also cited a recent move by business leaders at the World Economic Forum summit in January to develop an action plan, together with the Toilet Board Coalition, to tackle the sanitation crisis as an example of the corporate community moving on Goal 6, ensuring access to water and sanitation for all.

Ultimately, the Australian government’s voluntary review is a valuable opportunity to get the government and all stakeholders thinking about how they can contribute to the goals, Fulton said.

The goals constitute “an incredible framework for a decent society, and one that is sustainable from a social, economic, and environmental perspective,” she noted. “It will be a society that is responsible for ensuring that future generations aren’t negatively impacted by what we are doing here and now.”