Asia Pacific at the heart of global renewables boom

The global clean energy sector continued its breakneck development with a record US$329 billion of new investments last year, and Asia Pacific is at the heart of this boom, according to a new report by professional services firm EY.

China topped the index with US$110.5 billion in investments, followed by the United States, Japan, the United Kingdom and India.

Wind and solar are the key energy sources driving the spike in global renewable energy investment, found EY. Together, the two sectors snapped up US$270 billion in clean energy investments last year, more than 80 percent of the US$329 billion total.

They also accounted for half of all new power generation capacity installed last year, contributing 120 gigawatts of new energy projects.

Asia Pacific saw more clean power going online than any other region, with 36 GW of solar and 31.5 GW of wind capacity added.

This capacity was significantly higher than 8.9 GW in North America for solar energy, and 15 GW for Europe last year. 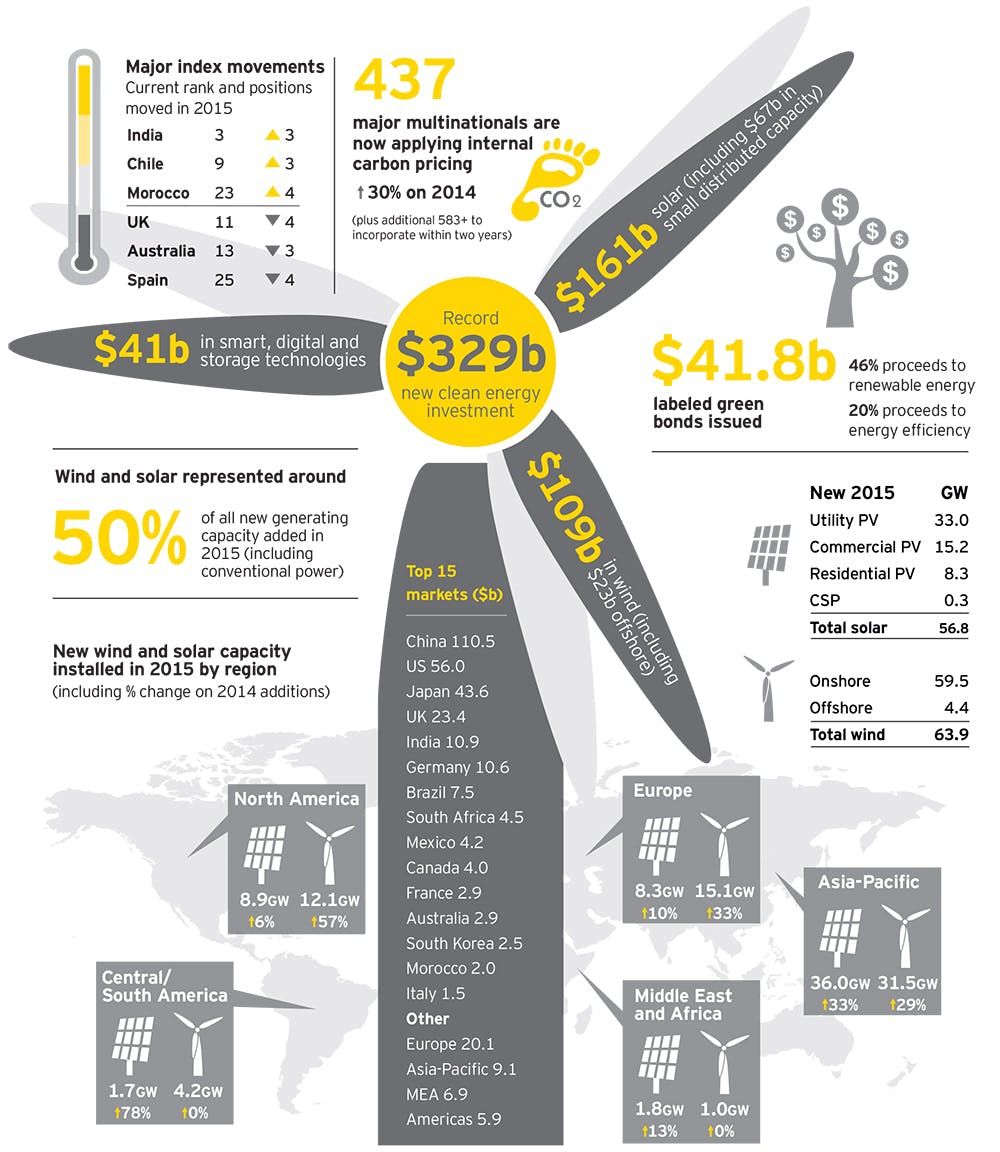 Matthew Rennie, managing partner, power and utilities, EY Australia, noted that India, Indonesia and Singapore are some of Asia’s most exciting markets.

With US$10.9 billion in clean energy investments last year, “India is the rising star of the Asia Pacific renewables market, and is starting to challenge China as the present index leader,” he said.

The rapid growth of investments in India is thanks to the government’s ambitious target to install 175 gigawatts of renewable energy capacity by 2022, announced last year. The country has also allocated US$400 million to finance this goal in its 2015 budget.

Indonesia, too, plans to scale up renewable energy to a quarter of its energy mix by 2025 - up from about six percent last year. The archipelago nation, along with Thailand and Vietnam are among the Southeast Asian players which have the potential to be major growth markets, according to the EY report.

In these countries, investment in clean energy is being driven primarily by an electrification agenda, said Rennie. That is, the need to bring energy to the 615 million people in Asia Pacific – a region with a total population of 4.2 billion – who live without electricity today.

India for example has 237 million residents with no access to power, while 49 million in Indonesia live in similar conditions.

In such countries which face an “energy trilemma” – that is, the need to increase energy generation quickly, keep electricity affordable, and reduce greenhouse emissions – experts frequently cite renewable energy as a solution that can achieve all three aims simultaneously.

Hence, governments are aggressively investing in renewable to provide cost-effective and sustainable energy, said Rennie. But the sheer scale of energy growth required in the region means it will also continue to rely on cheap fossil fuels such as coal and oil to meet demand, he added.

“Although renewable will account for a small proportion of the overall energy growth, the sheer scale of the investment programme means that the absolute capacity installed will be high,” he noted.  Thanks to this, the sector will also be able to flourish without subsidies, he noted.

Singapore, which achieved full electrification decades ago, is a promising market because not only is the government moving quickly to scale up its installed solar capacity to 350 megawatts peak by 2020, it is also putting millions into research on new storage and renewable technologies, said Rennie.

One example of this is the Energy Storage Programme, a S$25 million fund set up by the Energy Market Authority in 2014 to support the development of storage and related technologies, which are crucial for integrating renewable energy into the electricity grid in a reliable and secure way.

“Singapore should incubate new technologies in its own system and then look to export them to other countries in the region as they develop,” he added.

As Asia and the rest of the world continue to pursue clean energy, the sector’s growth will shake up how the energy industry as a whole operates, said EY.

Traditional utility companies, energy retailers – which sell electricity to consumers but do not own any generation assets– and even renewable energy firms will have to reinvent themselves to stay competitive in a constantly evolving market.

Utility companies have traditionally relied on selling energy derived from fossil fuels to a large consumer base, but are now facing stiff competition from “challenger businesses” such as renewable energy firms and technology innovators for market share, noted the report.

These utilities have “been little more than a footnote” in the rapid growth of clean energy sectors in Germany, Australia, and the UK, said EY. Rather, new and innovative companies are the ones stepping in as integrated energy service providers.

These new businesses tend to have a presence across more of the energy value chain - from manufacturing to generation to supply - and are flexible enough to adapt to changing customer demands for services and energy solutions.

Challenger businesses offer solutions that most utilities can’t, such as rooftop solar installations, storage, and smart energy management systems. Power companies will have to innovate new business models and “reinvent, or rest in peace”, said EY in its report.

Energy retailers will also have to scramble to keep up with these challengers by expanding their product portfolio beyond selling electricity said Rennie.

He suggested that they could get involved in more points along the value chain by offering customers options such as smart energy management systems, rooftop solar installations, and batteries which enable consumers to store solar energy generated in the daytime for later use.

Even as energy sector players struggle to keep up with one another, they will increasingly have to contend with companies outside the industry, from fields such as telecommunications and information technology,

“The new energy paradigm will force all companies to redefine their purpose, their products and services, customer base and geographical presence,” said EY.