The Sustainable Development Investment Partnership has launched an Asean Hub which aims to channel a mix of public, private and charitable money - called blended finance - to fund Asia’s US$26 trillion need for infrastructure by 2030.

A new platform to support infrastructure finance in Southeast Asia was launched on Friday at the World Economic Forum (WEF) on Asean 2017, with Cambodia becoming the first regional government to sign up.

Blended finance is the use of public, private and charitable money for investing into development projects, and is an important source of funding for projects that commercial or institutional investors are reluctant to touch due to project risks.

The SDIP, an initiative by the Organisation for Economic Cooperation and Development (OECD) and the WEF, is made up of 35 global governments, banks, pension funds and charitable organisations.

Speaking at the press conference on the Hub’s launch, Karby Leggett, Head of Public Sector, Asia, at Standard Chartered Bank, said: “We see the SDIP Asean Hub as an action-oriented platform to see and consider critical infrastructure projects and review them for financing, especially projects deemed by the market to be unbankable.”

He added that blended finance is a “cutting-edge solution” to financing Asia’s infrastructure needs and that the new initiative will “have a fundamental impact in unlocking financing.”

According to the Asian Development Bank, Asia needs to invest US$26 trillion by 2030 to resolve a serious infrastructure shortage that threatens to stunt the growth of the region’s fast-growing countries.

The SDIP also welcomed its newest member and a key backer of the Asean Hub, Eastspring Investments, which is the Asian asset management business of insurance giant Prudential and manages US$146 billion in assets.

Eastspring chairman Donald Kanak said the insurance industry can also be a good investor in infrastructure, and that the sector looks for projects with “stability, strong economics, past social and environmental due diligence”.

“We view SDIP as a platform to bring public and private sector together,” he said at a press briefing in Phnom Penh, where the WEF on Asean meeting was held from 10 to 12 May.

The Asean Hub has already gained the support of one Southeast Asian nation. Vongsey Vissoth, vice-chairman of the Supreme National Economic Council and secretary of state of the Ministry of Economy and Finance, Cambodia, said the country had joined the hub to share and learn best practices from global and regional financial institutions and governments.

“It (participating in the Hub) will help to pave ways for more sizeable projects and mobilise capital for critical infrastructure, which aims to improve the competitiveness for sustaining the country’s long-term growth,” he said in a statement.

For a start, the hub’s initial activities will be to engage countries in Southeast Asia and assess the project pipelines, and offer assistance for their completion. Cambodia will also host the first event of the SDIP this year, said Vissoth.

The creation of the Asean Hub comes almost one year after the launch of the Africa Hub. 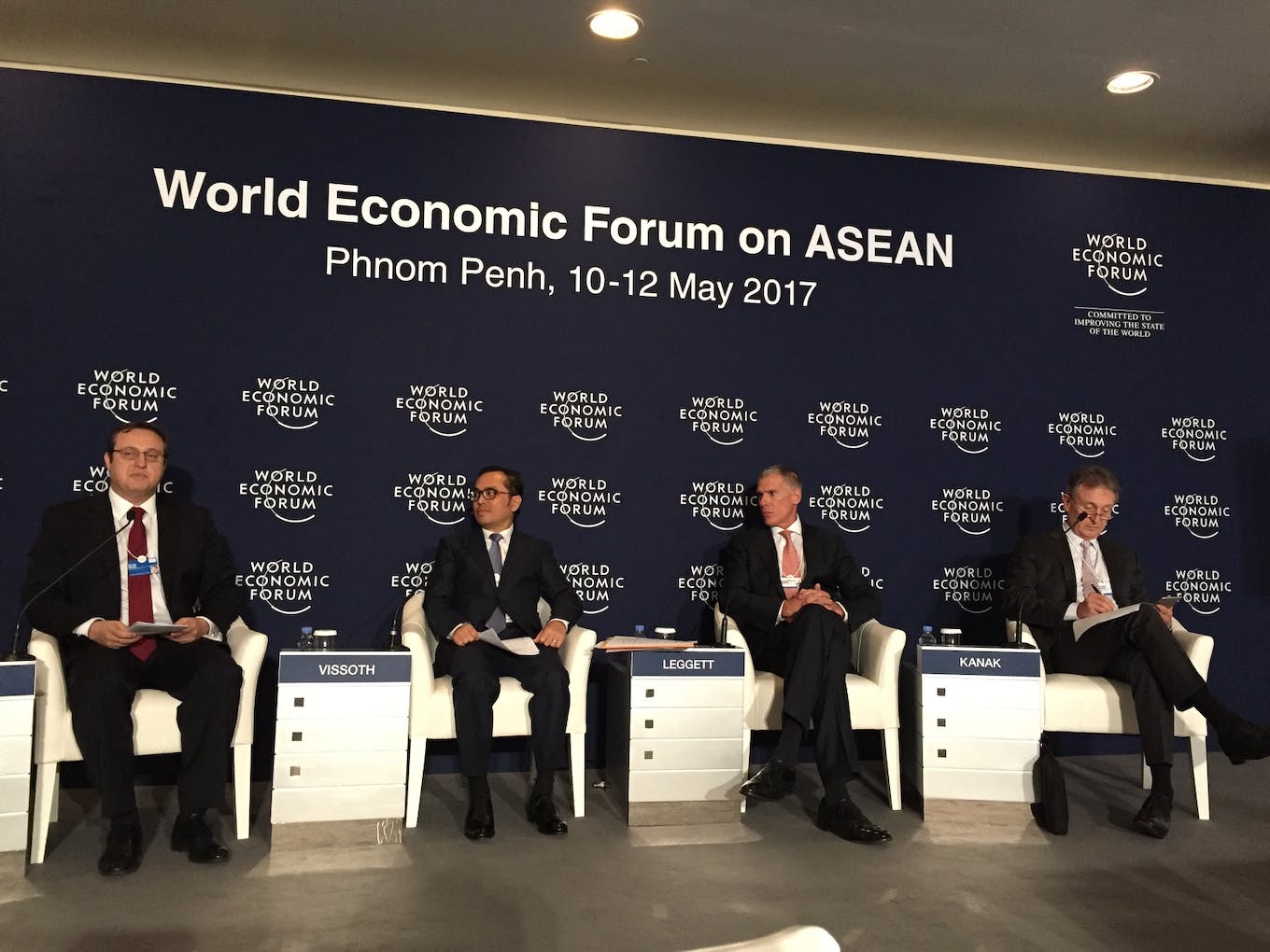 Responding to an Eco-Business question on SDIP’s role in light of the recently-set up Asian Infrastructure Investment Bank, a China-led development bank, Standard Chartered’s Leggett said both entities have “critical” roles to play and called AIIB a “complementary institution”.

“There is a great opportunity to cooperate together between SDIP and AIIB, and the capital resources that AIIB bring to bear through its robust equity capitalisation will be a deciding factor.”

He pointed out that the need for infrastructure now and in the future is too big an issue for any one party to resolve alone, and each can mobilise resources in different ways.

More than 700 business, government and civil society leaders from 40 countries participated in the 26th World Economic Forum on Asean. The theme of the meeting was Youth, Technology and Growth: Securing ASEAN’s Digital and Demographic Dividends.