Beyond the social stigma, there are barriers to affordable housing, having kids and marital benefits in the city-state. Progress on inclusivity is slow across Asia Pacific, but landmark rulings in recent years offer glimpses of hope.

When Felix Tan was younger, he thought it was a great idea to have children. Then he read up on the choices available for same-sex couples in Singapore.

Surrogacy, where a woman conceives, carries and gives birth to a child for another person or couple, is banned, and legal guardianship of such children isn’t guaranteed in Singapore if the procedure is done in another country.

Adoption is de facto off the table, with the process requiring multiple reviews by local courts and the government, which has stated its stance against same-sex parents raising children.

A draft law seeking to better define who can adopt children and expand eligibility checks to those adopting local children was tabled this month. It follows a review that started in 2019, after a gay man won a court case to adopt a surrogate child born overseas. Despite the legal win, same-sex parents remain rare in the city-state.

“You just don’t want to think about it anymore. It’s too much of a hassle,” said Tan, who is in his forties and works in the education sector.

So today, he lives with his partner and focuses on enjoying the extra freedoms of being childless.

The Singapore government has designated 2022 as the “Year of Celebrating Singapore Families”, as part of a recent tradition of theming years to drive public support for national initiatives.

Activities planned include tree-planting sessions for families with newborns, a mid-year carnival, as well as marriage and parenting programmes.

The designation comes as Singapore’s resident fertility rate dropped to 1.12 births per woman last year. That’s one of the lowest figures worldwide, and foretells a shrinking population.

The trend places increasing stress on Singapore’s long-term development. People are growing old without support from younger relatives. Schools are being merged as cohort numbers fall; the country’s military is looking at a shrinking pool of enlistees.

“The Year of Celebrating Singapore Families is a whole-of-society movement, and we encourage the people, public and private sectors to join us in celebrating families and nurturing a family-friendly ecosystem,” said Singapore’s social and family development minister Masagos Zulkifli in parliament last month.

But several Lesbian, Gay, Bisexual and Transgender (LGBT) individuals Eco-Business spoke to say much of the celebrations are irrelevant to them. The continued focus on heterosexual familyhood reinforces their marginalisation, they maintain.

“The government has a very simplified, narrow and conservative view of what constitutes a family,” Tan said.

“When I think of family, I don’t think of the traditional ideal that Singapore still wants to hold on to,” said Aarti Olivia Dubey, 41, a civil rights activist.

“It’s not just the LGBT folks, it’s also not inclusive for a lot of single parents, and a lot of people out there who don’t fit the mould. A lot of us can’t relate to it anymore and we don’t feel this is relevant to us,” Dubey said of the family-themed year. The number of births out of wedlock in recent years have averaged at around 830 annually, according to the government.

Dubey, who is non-binary and goes by “they/them” pronouns, is married to a man.

“I have way more privilege than my queer friends who are in same-sex relationships,” they said, pointing to a recent ruling allowing women to freeze their eggs in Singapore without medical reasons, but limiting their use to conceive a child to legally married couples only.

The rule effectively bars women from using the procedure to conceive and raise a child alone or in a same-sex relationship with a male sperm donor.

Dubey added that the activities planned for the year reinforces old stereotypes against the LGBT community building families in Singapore. Dubey has not told their parents of their sexuality, saying they don’t feel safe enough to do that.

Not everyone’s seeing the Year of Celebrating Singapore Families in a negative light. Pearlyn Tam, 32, and Brenda Eng, 35, who run an events company together, said they are keen to attend the parenting workshops, and will bring their two-year-old daughter to the mid-year family carnival.

“If any event is fun for kids, we’ll bring her along,” said Tam.

Tam and Eng, both women, travelled to Cambodia for in-vitro fertilisation — commonly referred to as IVF — to conceive, using a male sperm donor. 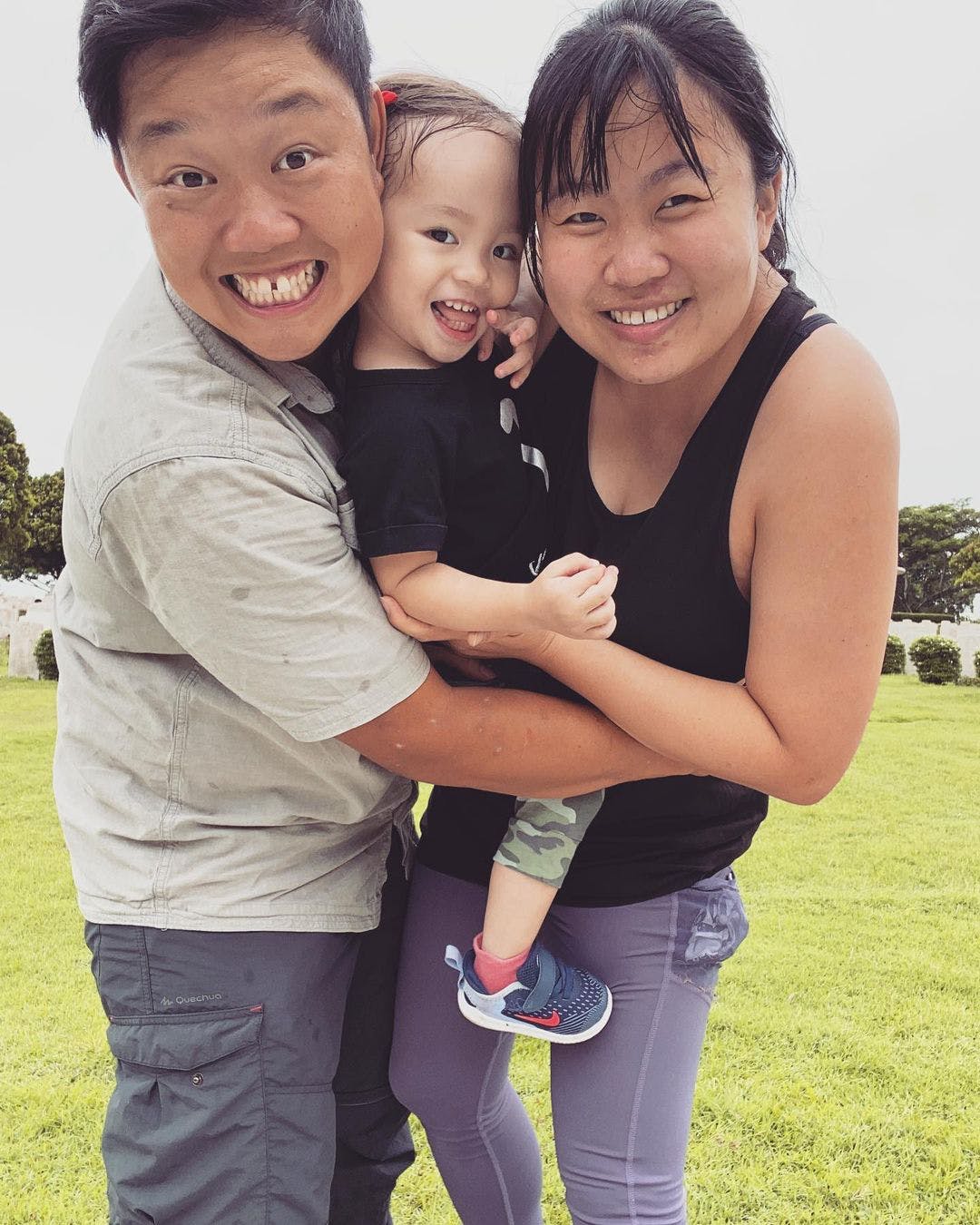 Eng said she will ask in advance if having two mums attending the events is alright. The couple had attended past family activities such as baby photo contests, and had never been turned down.

They said they didn’t let the challenges of childbirth in a same-sex relationship get to them, since they were set on building a family together. However, they still worry that Tam is solely recognised by law as a parent. This may come to bite, for example, if their child gets into a medical emergency and Eng cannot make any decisions.

Their families were hesitant on supporting the couple’s decision to have a child, but changed their minds once the baby arrived. Neighbours and friends have been understanding, they added.

In fact, the couple is planning for a second child soon.

Tam and Eng run an Instagram page, “TwoMomsSG”, to document their journey of building a family and support other same-sex couples who are planning to do so. Many keep their plans secret from their families, while others find it hard to get past the legal headache, Tam said.

“A lot of people prefer to be under the radar, they don’t want too much attention and unnecessary questions,” she added.

Asia Pacific has been slow compared to Western nations in recognising LGBT rights. Out of 31 global jurisdictions that recognise same-sex marriage, only three – Australia, New Zealand and Taiwan – are in the region.

The United Nations runs an Asia Pacific programme to study and promote LGBT inclusivity. It states that its work contributes to several of the Sustainable Development Goals, a set of global targets to tackle poverty, inequality and environmental issues by 2030.

There has been progress. Over 70 per cent of Asia Pacific respondents in an Economist Intelligence Unit survey said things were better for LGBT people in 2019 compared to 2016.

India repealed Section 377 of its Penal Code, a colonial-era law against homosexual sex in 2018, but similar bans still stand in Comonwealth countries such as Bangladesh and Malaysia. In Singapore, sex between men is criminalised but is not proactively enforced, according to authorities.

Singapore’s government said last month it was considering the “best way forward” on the law, after several failed constitutional challenges in previous years. A survey last month, posted by Reach, the government’s official feedback unit, garnered over 30,000 responses. Among other questions, the survey asked respondents if they believed Singapore was a safe place for LGBTQ+ minorities.

“Small things like these do make me feel hopeful. But I am also realistic, I don’t want to get my hopes up,” said Claire, a 26-year-old media consultant, who feels that the government is too slow to act on changing public perceptions. Claire wished to only reveal her English name for privacy, as she has not come out to her parents as bisexual.

Claire and her partner, of the same gender, have been renting a room since graduating from university last year. Owning a government-subsidised flat is off the cards even though the couple intends to settle down together.

In Singapore, only singles 35 and older can buy such apartments, where 80 per cent of the resident population lives. The restriction to own such property applies to same-sex couples.

“I’m definitely upset about it,” Claire said. Average rental prices in Singapore can add up to the cost of buying a flat in under a decade.

Under a new ruling last year, singles cannot buy units in public housing blocks in prime locations close to the city centre. The government said it was prioritising larger households for those apartments.

Other policies also discriminate against unmarried couples. While perusing her employee health benefits recently, Claire realised that it extends to her family members. Which means, not her partner.

“Oh well, what to do,” she recalled thinking.

Claire said she has nothing against the family-oriented theme of the year, but added it wasn’t relevant to her. She wished the activities were more accommodating to variations of families beyond the heterosexual and child-bearing ones.

Singapore’s social and family development ministry referred Eco-Business to its press release about the year’s theme and an online listing of events, in response to queries on activities for same-sex couples, and how the ministry plans to ensure that the LGBT community can feel included.

Jarratt Ong, a 30-year-old marketing professional, said that children should be taught how there are multiple definitions of families, and what options LGBT individuals have for housing and having children. As a gay man, Ong said he wished he had learnt about them earlier.

“It was like I had a very close-minded view about what is available to me,” he said of his younger days.

“The government could really get creative. Aside from LGBT families, we also have children who didn’t grow up with their parents and have guardians or grandparents taking care of them. There’s single parents as well,” Dubey said, adding that dialogue between different family groups can help forge empathy.

But Tan said that authorities will have to prove their intent behind any overtures to a guarded community, after years of being ostracised and disappointed.