Satellite analysis has found that Asia Pulp and Paper-linked companies have cleared 3,500 hectares of peatland over the last two years, including since the outbreak of the Covid-19 virus, according to a report by Greenpeace. APP denies the allegations.

Companies owned or supplied by Asia Pulp and Paper (APP) may have cleared 3,500 hectares (ha) of environmentally sensitive peatland in their concessions over the last two years, with 50 ha of peatland burning just last month, satellite analysis by environmental group Greenpeace has indicated.

The draining and burning of the swampy, carbon-rich landscape to develop plantations would violate a historic pledge Indonesian’s largest pulpwood company made in 2013 to stop converting peatlands, which are among the world’s most powerful carbon sinks. An estimated 60 per cent of APP’s concessions are on peatlands.

The report emerges during the Covid-19 pandemic and ahead of the haze season, an annual environmental calamity that emits more carbon than Indonesia’s energy and transport sectors combined, mainly as a result of drained and burned peatlands.

Greenpeace identified three APP-linked companies that have been converting peatlands in Sumatra between August 2018 and June 2020. Two of the them, wood suppliers PT Bumi Mekar Hijau (BMH) and PT Bumi Andalas Permai (BAP), are located in South Sumatra, where APP opened a new pulp mill in 2016.

There is no foolproof system [to tackle forest fires]. We have encountered lapses in the past and will likely make mistakes in the future, but our willingness to close loopholes and stick to our commitments is clear.

APP supplier BMH has cleared 2,110 ha of peatland and dug 48 kilometres of canals to drain the peat to prepare it for planting, according to the analysis.

BMH, which recorded more fire alerts within its concession than any industrial plantation during last year’s haze outbreak, has burned more than 87,000 ha of land between 2015 and 2019, Indonesian government burn scar data collated by Greenpeace has shown.

In 2016, BMH was sued by the Indonesian government for allegedly failing to prevent or intentionally starting fires that burned 20,000 ha of its own land in 2014 and 2015.

The third company named in the report, APP-owned PT Arara Abadi (AA), has allegedly cleared 170 ha and dug 5 kilometres of canals to drain the peat in its concession in Riau province. Fires were identified on the company’s concessions last month, local media reported. 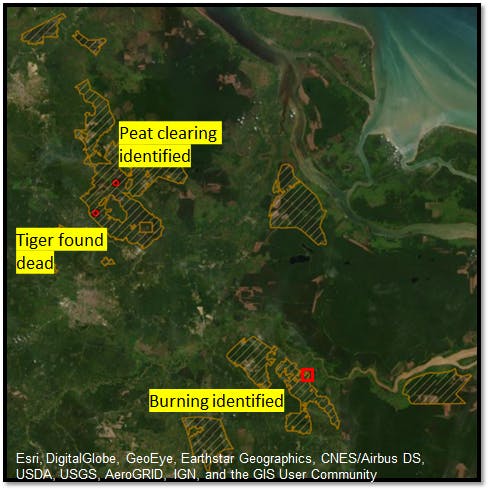 Greenpeace Southeast Asia’s Indonesia forests campaign head, Kiki Taufik, said the NGO’s findings make a “mockery” of APP’s stance on sustainability. “No company that claims to care about the environment can continue to trade with APP,” he said.

APP has denied the allegations, which were made public on 15 July, the day the company shared progress made on its sustainability roadmap with stakeholders. APP said it has not converted any peatland since its no-deforestation, no-peat and no-exploitation [NDPE] declaration in 2013 and has been implementing a zero-burning policy.

The company said that it was not clear which maps the report used for the analysis. Greenpeace referenced data from satellite imaging firm Sentinel, Indonesia’s Ministry of Agriculture, and the Ministry of Environment and Forestry.

APP said that it has mapped its supplier concessions up until 2018, and shared that data with the environment and forestry ministry in line with peatland protection regulations introduced since the haze outbreak of 2015.

APP declared it has spent more than US$150 million on fire prevention and suppression efforts, including a community engagement programme to discourage fire-starting, which is a long-held tradition among farmers to quickly and cheaply clear land.

Among the highlights of APP’s stakeholder forum was an update to the company’s Forest Monitoring Dashboard, which allows its forest conservation commitment to be publicly tracked through the Forest Alert Service. However, NGOs have questioned why the system only enables protected areas to be monitored, and not the rest of the company’s concession area, which spans some 2.6 million hectares.

APP told Eco-Business that the service is focused on protecting conservation forests in APP supplier concessions, which are forested areas “as determined by high carbon value (HCV) and high carbon stock (HCV) assessments.” The rest of APP supplier concession land consists of plantation areas and land set aside for community livelihood, the company said, adding, “these are not forests.”

APP also appears to have reduced the area of forest it plans to conserve within its concessions. In 2014, the company pledged to “protect and restore” 1 million hectares of forests, which would go some way to offset the estimated 2 million ha of forest NGOs claim the company has cleared over its history. However, in its latest stakeholder advisory update, the company said it was committed to protect “more than 600,000 hectares” and restore 100,000 ha.

Responding to questions from Eco-Business, the company said that after completing HCS and HCV assessments, it identified more than 600,000 ha of forests to be set aside for conservation, which it said is beyond the mandatory figure set by the government for conservation.

APP conceded that haze and fire is an ongoing problem in Indonesia with no easy fixes. “There is no foolproof system. We have encountered lapses in the past and will likely make mistakes in the future, but our willingness to close loopholes and stick to our commitments is clear,” the company stated.

Greenpeace was the NGO credited with helping APP to forge its landmark NDPE policy seven years ago. But the green group dissociated with APP in 2018 and claimed that the Sinar Mas-owned company had—through undeclared affiliates companies— cleared more than 8,000 hectares of forest since making its NDPE pledge.

Greenpeace’s report comes a few months after a coalition of 90 NGOs called on business partners of APP to end deals with the company following a land dispute in Jambi, Sumatra.

The risk of severe forest fires in Indonesia this year has been assessed as “moderate this year, as heavier than usual rain has reduced haze risk.