Construction for what was slated to be the world’s biggest coal terminal has not yet even started, but it is fraught with challenges from feisty activists.

For nearly 24 hours on March 1, coal did not reach a Queensland mine owned by Indian energy giant Adani.

A 39-year-old anti-coal activist from Bundaberg locked himself to a coal train blocking it from entering the Abbot Point coal terminal, as a sign of protest against the planned construction of the Carmichael coal mine project that was envisioned to be one of the world’s biggest.

Activist Mark Simpson used an elbow lock to attach himself to a train to continue the shutdown of the rail line before being cut free by police. 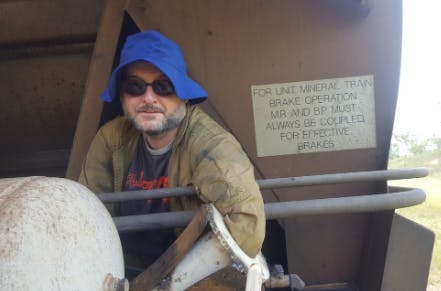 Coal activist Mark Simpson used an elbow lock to attach himself to a coal train on the way to the Carmichael coal mine in Queensland, Australia. Image: Shut Down Adani

“I am risking arrest and fines because the old political establishments have turned their backs on citizens they are employed to represent,” said Simspon, who also works as a cleaner.

“Instead they are making dirty deals with some of the most corrupt resource companies that have ever been.”

After police removed Simpson from the train, a 21-year old girl from Perth used a heavy duty elbow lock to attach herself to the rail, stopping operations anew.

Identified only as “Freya”, the activist held a banner that said “Adani, this is only the beginning”, before police whisked her away.

I am risking arrest and fines because the old political establishments have turned their backs on citizens they are employed to represent.

This follows a protest from a 28-year old from Canberra, who spent 20 hours in a tree sitting in the same area last week. The protester known as “Jill” was perched 20 metres off the ground in a tree-sit tied to the Newlands Rail line. 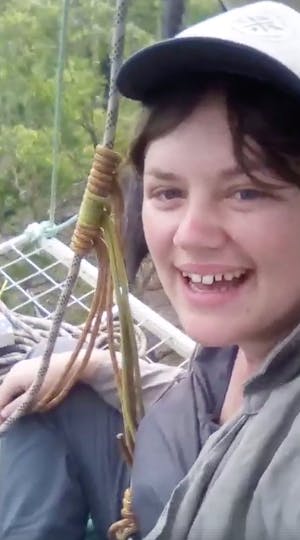 In a video, Jill talks about how she spent a cold night up a tree with police watching from below. Image: Extinction Rebellion

These protestors are just a few of the climate activists clamoring for the shut down of Adani’s Carmichael coal mine project, which is feared not only to threaten Australia’s beloved Great Barrier Reef, but also risks pumping huge volumes of carbon emissions into the atmosphere.

Adani is behind the project which was once priced at A$16.5 billion (or US$ 11.6 billion) and would have been Australia’s largest mine but amid protests and failure to secure funding, has been scaled down to A$2 billion (or US$1.4 billion).

Even with the downsized project, the Carmichael coal mine is expected to produce 4.7 billion tonnes of greenhouse gas emissions, which will eat up more than 0.5 per cent of the world’s remaining carbon budget if it is to cap global warming at 2 degrees Celsius above pre-industrial levels.

Despite warnings from enviromentalists, the Australian government approved the project in 2014, with the promise of thousands of jobs.

The project has been delayed since then, after it ran into more resistance from climate activists. As a result, Australian banks were pressured to review their lending to fossil fuel developments, with Westpac ruling out funding the project two years ago.

However, in November last year, the Indian conglomerate stubbornly announced that the firm itself would finance the project.

Even as Adani plans to start work with its self-financed plant, hurdles remain as it is still waiting to pass key environmental approvals from the state government, without which construction cannot begin.