The complex realities of today’s global issues like water security and trafficking are demanding a more multilateral approach to their solution, and are changing the nature of how entities of different sectors collaborate.

The Asia Public-Private Partnerships Hub (Asia P3 Hub) is a newly-launched incubator that is riding this wave of change to alleviate Asia’s water woes and pave the path for more collaborative action to meet the region’s needs.

Launched in July under the auspice of faith-based non-governmental organisation (NGO) World Vision International, the Asia P3 Hub adopts a cross-sector partnership approach to bring together companies, start-ups, non-profit organisations, and the government to develop market-driven solutions to solve the issue of water in Asia.

Based in Singapore, the incubator is headed by executive director Christy Davis, who is also World Vision’s director of partnerships development for South Asia & Pacific Region.

It is the first programme of its kind for World Vision, which has identified multi-sector partnerships as part of its global strategy for the future because of the “complexity of the problems we’re experiencing on the ground” and the shifting landscape of donor funding.

Davis said that World Vision has seen donors become more interested in contributing to coalitions and alliances rather than making traditional “bilateral” donations. She explained: “Partnerships and collaboration facilitate scaling of solutions. Donors and investors are increasingly interested in leveraging their investment, and contributing to a partnership or a coalition is one way this can happen.”

Joint efforts also have the potential to create a multiplier effect and therefore create a “more sustainable positive impact on communities we serve and partner with”.

Speaking to Future Ready Singapore, Davis said the idea for an incubation hub that would meet social and business objectives grew out of conversations with the Economic Development Board of Singapore back in November 2014 on turning cross-sector partnerships into concrete action.

Partnerships and collaboration facilitate scaling of solutions. Donors and investors are increasingly interested in leveraging their investment, and contributing to a partnership or a coalition is one way this can happen.

The Asia P3 Hub will focus on delivering partnerships brokered between businesses, researchers, donors and development organisations engaged in the same mission to improve water access in Asia through “combinatorial innovation”, which Davis defines as putting together tried and tested ideas in new ways for new solutions.

Furthermore, it will also document the stories of its processes and results. “So it’s two-fold, where you have lives changed for the better - and that’s the bottom line for us - and this amazing journey to travel until we get to that point, and others can learn from us,” said Davis.

Water crises were named a global risk of highest concern for the next 10 years at the World Economic Forum in Davos earlier this year. Currently, some 630 million people in Asia do not have access to water.

For the duration of its three-year pilot period ending June 2019, the Asia P3 Hub will focus on the area of water, sanitation and hygiene in six core Asian countries – Bangladesh, Cambodia, India, Indonesia, Myanmar, and the Philippines.

Davis said water was an “obvious” choice given the fact that World Vision is the NGO with the largest water portfolio in the world, having worked for more than 60 years with communities, governments, and local partners in 19 Asian countries. As a global hydro hub, Singapore has “massive resources” for research and development, and almost 200 companies in the water value chain, said Davis.

The Economic Development Board (EDB) has acted as an “enabler” for the hub, and through EDB’s facilitation, the Asia P3 Hub has grown its community of interested partners to 450 even before hitting six months of operations. Innovative local water firm Hyflux has been an advisor, while PUB counts as one of the hub’s partners.

At the moment, the incubator is involved in a “couple of dozen” ongoing conversations for potential collaboration, said Davis. These include Procter & Gamble, Kohler, EDB, Singapore Management University, and start-up WateROAM that produces the ROAMfilter Lite, a portable water filtration system that has been used in post-disaster relief.

As a “living lab”, Singapore is also conducive to the creation and deployment of new technologies. According to WateROAM chief executive David Pong: “Singapore is a safe sandbox for start-ups to create innovative solutions that tackle bigger global issues. Being part of Asia P3 Hub allows us to work with larger public and private organisations driven by the same goal, to create new market-driven solutions for the problems around us.”

The Asia P3 Hub has its work cut out for it.

Until the end of the year, the incubator will be working to build up operational and participation models, hire a core team and an advisory committee, find new office space, and set up its website. “We’re also working on our storytelling and how we’re going to measure success,” shared Davis.

In the meantime, Davis said the hub faces a few challenges in the short term including staying focused on its core competencies and six core countries. “I can already see that people come in and go ‘I’ve got this idea, can you help us?’ And sometimes it’s a wonderful idea, but we’re going to need to stick with our scope.” 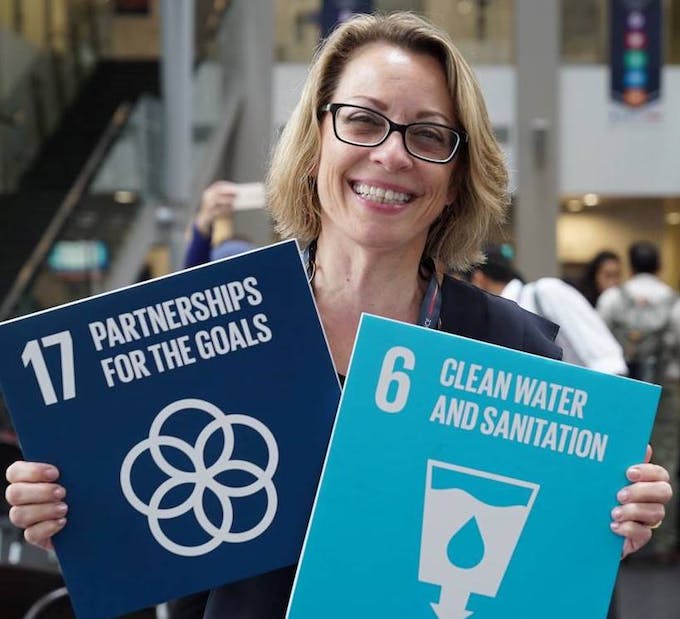 Another challenge is securing quick wins that will motivate the team and give it momentum. Davis said her answer to this is to start at a smaller scaler with familiar partners to fine tune processes before scaling up.

Ultimately, as it grows out of Singapore to tackle the region’s problems, the Asia P3 Hub could be a trailblazer for NGOs and private companies that are looking to develop cross-sector partnerships for common purposes.

The third challenge is to build visibility through a website and community engagement, for which the Asia P3 Hub is “still getting mechanics in place”, admitted Davis.

Said Davis: “There’s little out there (about working cross-sector partnership models) so we want to create something, track it, and be very transparent as we go along, so others who follow or want to replicate this can look at what didn’t work and learn from us.”