A ‘jigsaw’ approach to protecting the environment

The fight against climate change requires a ‘jigsaw’ approach that deploys many complementary tools, policies and partnerships to protect the environment, according to delegates at the recent Macao International Environmental Co-operation Forum and Exhibition.

With interest in sustainability issues growing worldwide, more international events are needed for nations, local governments, companies and non-profit groups to exchange ideas, share technologies and create partnerships to fight climate change and protect the environment. Macao is ideal for such gatherings as it is well-known in the East and West, and a longstanding bridge to Portuguese-speaking countries.

These were the sentiments expressed by exhibitors and delegates at the recent Macao International Environmental Co-operation Forum and Exhibition’s (MIECF) Green Showcase, an expo which focused on products to boost sustainability in energy management, air quality, mobility, buildings and other sectors.

This year’s edition of MIECF, which was held from March 28 to 30 at the Venetian Macao, was hosted by government of Macao and had Promoting Ecological Civilisation and Green Development as its theme.

Benjamin Yue, principal advisor to the executive committee of the Companhia de Electricidade de Macau (CEM), an electric utility, said: “Exhibitions like this one can help with global environmental goals because companies from different countries can come together to understand more about one another’s techniques and machines, and see which ones are most suitable for their own countries.”

“MIECF could also help the companies to find opportunities for collaboration, especially with China already partnering many countries in its international infrastructural project, the Belt and Road initiative,” he said.

This year, more than 500 exhibitors from 20 countries and regions participated in the Green Showcase, covering a total area of about 16,900 metres, and more than 7,000 professionals attended the MIECF in total. Furthermore, about 350 business meetings were held during the event, which resulted in 44 agreements being signed.

“The exhibition was very well-organised, with different types of visitors on each day. We had industry and government visitors on the first day, academics on the second day, and the general public on the third day,” said Alexander Madden, chief executive of British firm Agrivert, which recycles food waste into energy and fertiliser. It was the company’s first time at the annual MIECF, which has been held since 2008.

“We’re operating in Hong Kong and may have an opportunity in Macao, so we wanted to come here to get more exposure. We’ve had government officials from mainland China, specifically Guangzhou, express interest in our work too, so we’re very pleased,” he said.

Yue added: “We’ve learned a lot from this exhibition over the years, and found consultants who advised us on systems that we could install to reduce the environmental impact of our electricity generation and distribution.”

Singapore-based environmental engineering firm Citic Envirotech, which was taking part in the Green Showcase for the second time, said that its booth last year had resulted in serious interest in its products from a mainland Chinese firm, and talks with it are ongoing.

“We wanted to come back too because Macao is a bridge to Portuguese-speaking countries, and we want to make use of this platform to further expand our reach  and see if we can go to more of these countries. It’s been a fruitful few days because we’ve had many exhibitors, from mainland China and from other countries, come by our booth to see if there are any opportunities for collaborations,” said a spokesman. 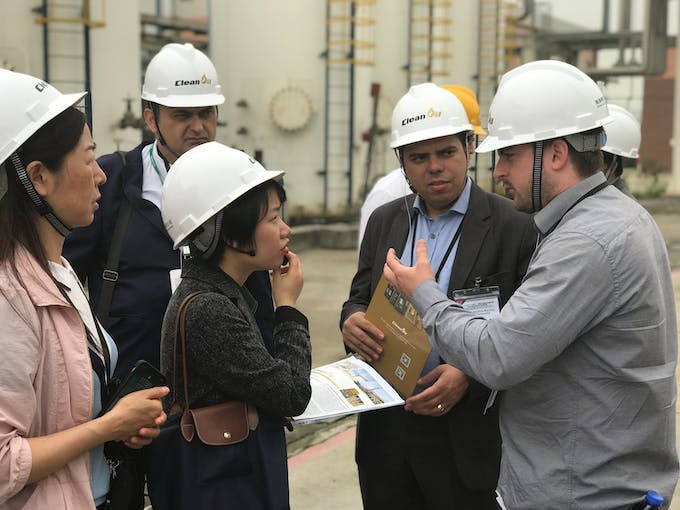 CEM’s Yue said that Green Showcase’s potential benefits for both exhibitors and delegates will continue to grow as more people attend. “Issues related to climate change and the environment are gaining traction everywhere, and this exhibition has become a brand for Macao, so I think we will continue to see more people coming, more companies exhibiting, and more government officials being part of it too,” he said.

Agrivert’s Madden said that the event’s wide-ranging coverage has been part of its strength. He explained that environmental protection is complex and requires efforts on various fronts to achieve change. “You can learn about many different things, from environmentally-friendly building materials to building control systems. This is good because all of these things are part of the jigsaw when it comes to protecting the environment.”

Developments in wind and solar power, electric vehicles and energy efficiency in production have been extraordinary but more is needed from corporates and investors in the next decade, says Michael Liebreich, keynote speaker at the recent Macao International Environmental Co-operation Forum & Exhibition.
The world has 'two business cycles' left to meet Paris goals

How China grew its US$30 billion green bond market

China’s pioneering practices in the green bond market has made it a leader in the field and holds lessons for other countries, says expert Sean Kidney at this year’s Macao International Environment Co-operation Forum & Exhibition.
How China grew its US$30 billion green bond market

Can China’s 'sponge cities' work in other countries?

China’s push to develop ‘sponge cities’ that can absorb the impact of climate change could hold lessons for other countries, says environmental expert Professor Guan Yuntao ahead of this year’s Macao International Environmental Co-operation Forum & Exhibition.
Can China’s 'sponge cities' work in other countries?