Thirty-nine Italian municipalities are now meeting 100 per cent of their energy demands with renewable energy, proving that it is fully possible in this type of climate for urban areas to completely decarbonise and provide cheap energy for citizens and businesses.

The change over the last 10 years has been remarkable. Italy as a whole has brought its consumption of renewable energy up from 15 per cent to 35.5 per cent. This has been largely due to a distributed production model with the addition of over 850,000 generation plants all over the country.

It has brought about an increase in clean production of 57.1 terawatt hours a year. The number of municipalities with at least one plant supplying renewable energy has increased from 356 to 8047.

In 2660 of these municipalities, the production of clean electricity often exceeds that consumed, allowing them to export to neighbouring areas for profit.

The top 39 municipalities have met 100 per cent of both their thermal and electricity needs from renewables. They have achieved their results thanks to increasingly innovative and integrated solutions, smart grids, electric mobility, storage and a desire for reduced energy bills.

The full results of the survey come in a new report, Renewable Municipalities 2016 Legambiente, compiled with help from Enel Green Power. Legambiente is a long-established Italian environmental NGO.

The report shows that Italy is ahead of Germany and Greece and other front runners in the use of solar power, by providing 8.1 per cent of its population with electricity from this power source. 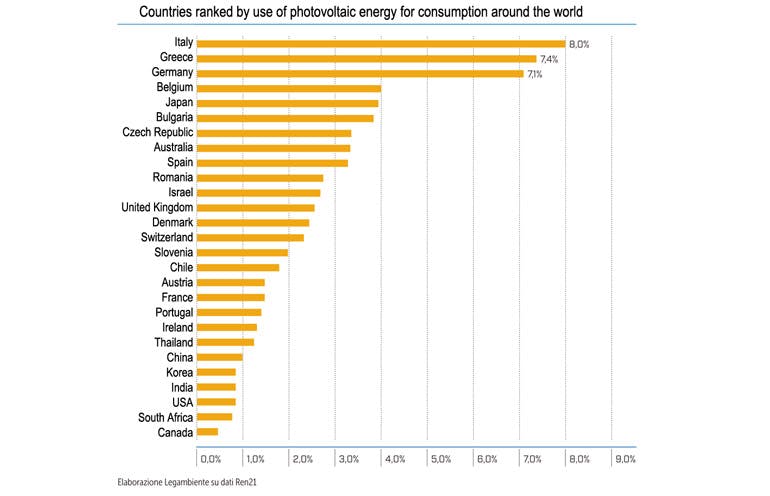 Recently, however, investment in the sector has declined, mainly due to a reduction in the contribution of hydropower and a slight reduction in the introduction of new photovoltaic installations.

By source, the headline figures are:

Edward Zanchini, the vice president of Legambiente, said, “It’s time to open a new phase of development of renewable sources in our country. The most advanced municipalities in this ‘revolution from below’ demonstrate how you have to look at an increasingly distributed energy model, which is clean and innovative.”

“The new Italian energy minister Calenda proposes to look at these experiences to achieve the target of 50 per cent renewable announced by Premier Renzi within the legislature, in particular the self-generating, local production and distribution from renewable sources.”

He highlighted that there are still many barriers obstructing this progress, including local taxes, which can even prevent installations that would be at no net cost, and that it is necessary to introduce simple and transparent rules for the approval of projects, particularly for establishing networks.

It’s time to open a new phase of development of renewable sources in our country. The most advanced municipalities in this ‘revolution from below’ demonstrate how you have to look at an increasingly distributed energy model, which is clean and innovative.

Many of the best developments are collected on a website http://www.comunirinnovabili.it. Thanks to this, Italy is significantly reducing its dependence on imports of fossil fuels and reducing its greenhouse gas emissions.

This has an impact on the economy. A study by Assorinnovabili has shown that the effect of wind and solar power on the stock exchange could save €7.3 billion (AU$11.33b) in three years.

According to Eurobserver, 82,000 jobs have been created in renewables in recent years. Increasing on this trend it could lead to 200,000 people employed in the sector by the end of the decade, and 600,000 involved in upgrading buildings to be more energy efficient.

The Town of Pfitsch, in the province of Bolzano in northern Italy, with a population of 3000, one of the 100 per cent renewable energy municipalities, deploys a mix of five technologies. Electricity needs are met by mini hydroelectric and photovoltaic solar systems on the roofs of public and private buildings plus a hydroelectric plant built in 1927 and renovated between 1997 and 1998, yielding 21.7MW.

Heating requirements are met through a district heating network, 52.9km long, powered by a biomass plant that also contributes to the needs of the neighbouring municipalities of Sterzing and Racines.

There are also two biomass plants, one plant using bioliquids, that are connected to electricity and heat network, and some solar thermal plants.

A local energy supply company manages the networks, which is also making investments in fibre optics and smart technologies to help with management of energy and water networks.

The latest project under construction is an anaerobic digestion biogas plant can collect the waste of livestock farming in the valley, which produces both electricity and thermal energy (fed into the grid and used the company to close yogurt). The waste material will be used as biofertiliser. It also solves the problem of disposing of sewage waste.

The “Good Practice” Award in the report went to the small town of San Lorenzo Bellizzi, located in the Pollino Park area, with a population of around 750. Beginning in 2012 the City Council decided to use some land, without charge to local agricultural cooperatives, to install 15MW of photovoltaic systems on greenhouses.

The revenue from feed in tariffs, around 80,000 euro a year, has been redistributed over the years to the citizens through the exemption from another tax.

The report recommends various good practices that could be adopted not only in Italy but elsewhere to promote the more widespread use of renewable energy at local levels:

This story was published with permission from The Fifth Estate.