Coastal forests trap huge volumes of greenhouse gases and protect people from flood risks. This International Day for the Conservation of the Mangrove Ecosystem, Eco-Business speaks to a researcher on the frontline of conservation work.

Professor Daniel Friess’ 17 years of research in coastal ecosystems started with wanting to get away from his hometown Milton Keynes, in central England, about a hundred kilometres from the nearest seashore.

“I just love the coast,” Friess said. “Once I met mangroves, that was it.”

His expertise in how wetlands respond to sea-level rise brought him from the United Kingdom to Singapore, where he has been based since 2009. Today, Friess focuses on how people interact with mangrove forests and seagrass meadows, such as the destruction we bring to these ecosystems, and the benefits we didn’t know we could get by conserving them.

Mangroves – a collection of trees that grow on salty, coastal mud which gets flooded by the tides daily – have gained prominence as global warming has worsened in recent years. They can suck up larger amounts of Earth-heating carbon dioxide from the air than dryland trees, and tame storm surges before they reach human settlements.

However, their home ground along the world’s tropical coasts has also put them on a collision course with rapid human and economic development. Singapore has already lost over 80 per cent of its mangroves since the 1950s. Neighbouring Indonesia, which houses the world’s largest repository of such coastal forests, has lost over 30 per cent of them, as large-scale aquaculture has picked up in recent decades.

Friess wears many hats in conserving Southeast Asia’s mangroves. He lectures in the geography and environmental studies departments at the National University of Singapore, and holds a deputy directorship at the school’s Centre for Nature-based Climate Solutions. He is consulted for both public coastal protection work and corporate carbon offsetting projects.

He told Eco-Business his philosophy to nature conservation is cooperation.

“We have to be realistic and we have to work with stakeholders. Stakeholders are going to have different views all the time, but trying to find the consensus and middle ground is really important. If you want to have a voice at the table, then you need to work with, not against people,” Friess said.

His proudest work, he said, is a project to re-wild abandoned shrimp farms on Pulau Ubin, a rural island off the northeastern coast of Singapore. The shrimp ponds have been dug so deep that mangrove seeds, or propagules, will probably not survive being re-planted as is.

The project, led by Singapore’s National Parks Board, was announced last year, but Friess, along with other experts and local communities in a group called the “Restore Ubin Mangroves (R.U.M)” initiative, have been studying how to modify the ponds to mimic their original depths to give saplings a higher chance of survival since 2014. Friess hopes the actual filling work will be completed in the next few years. 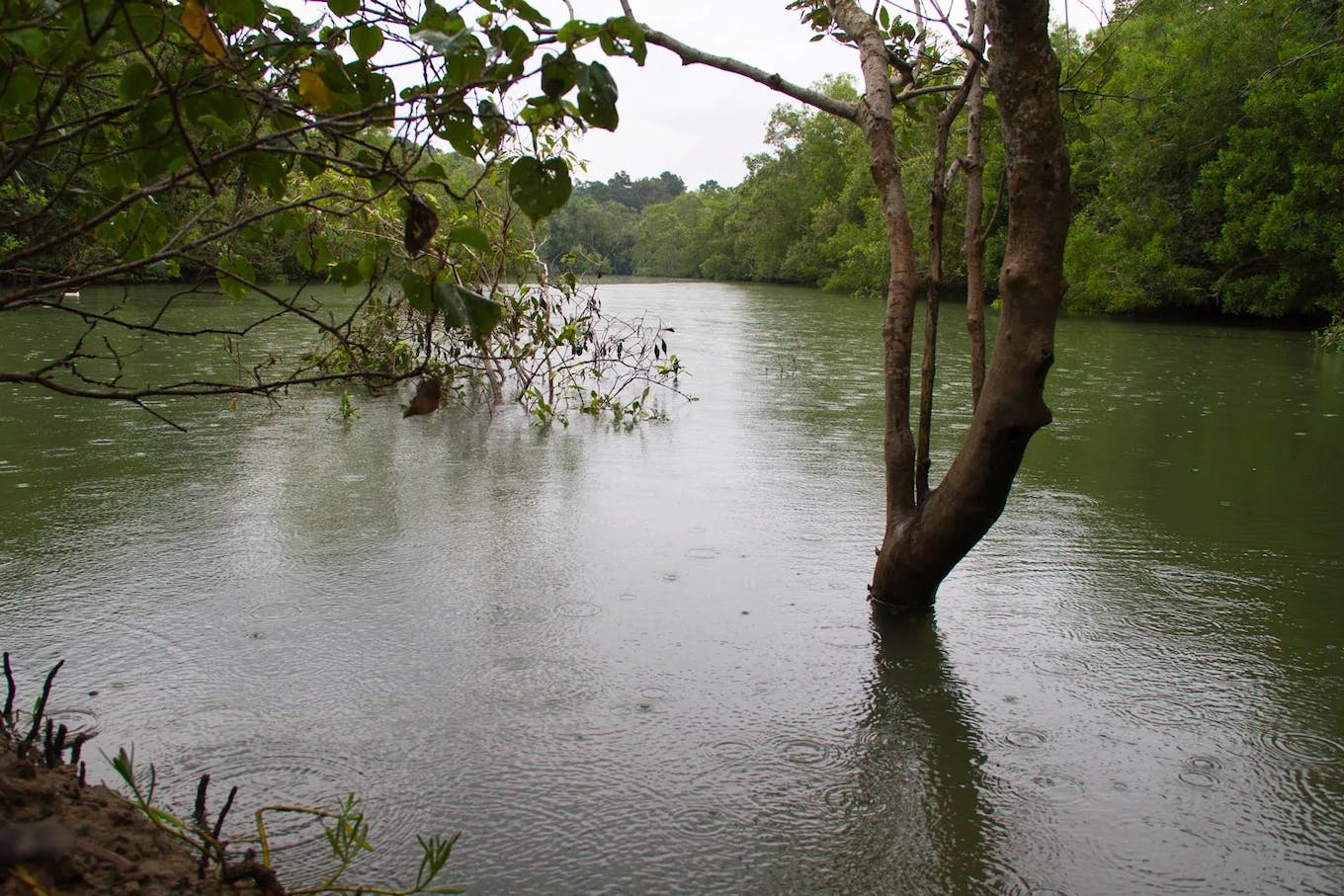 An abandoned shrimp pond on Pulau Ubin, Singapore, which Friess and other experts are looking to turn back into a mangrove forest. Image: Liang Lei/Eco-Business

Here’s a sneak peek into how Friess spends a working day:

5.30am: I’m up early this morning to get my field gear together, because we have to catch the low tide at a mangrove forest on the northern shore of Singapore. We have a permit to enter the site for a study that is investigating the coastal protection value of Singapore’s mangrove forests.

Today is a pretty straightforward trip – we need to download the data from some sensors, change the batteries and clean the instruments.

The sensors have been measuring the amount of wave and tidal energy in different parts of the mangrove forest. Many mangrove tree species have a tangled mess of roots above the ground. When a wave hits these roots the wave energy and height decreases, protecting areas further inland.

At the same time, sediments suspended in the water also settle onto the forest floor. Understanding the rate at which this happens gives us an idea of whether the mangrove is able to increase its elevation and keep pace with sea-level rise. There is a lot of concern about whether coastal ecosystems such as mangroves will be able to keep up with the rising seas, or if they will drown in the future.

6.30am: On the way to the field, I’m checking emails on my phone to see what has come up overnight. We collaborate a lot with other researchers from around the world, so at this time of the morning my inbox is normally full of emails from colleagues in the US and Europe.

It is always a surprise as to what I’ll find in there! It could be an email about a journal manuscript – we are currently writing a paper on how to restore mangroves that have been impacted by cyclones. Or it could be an invitation from a group in Mexico to speak at a conference they are holding on blue carbon. It could be a journalist from the UK asking for quotes for a story they are writing on mangroves, a student from Europe enquiring about an internship opportunity, or confirming the price with a vendor in the US for some instruments that measure greenhouse gas fluxes.

This smattering of emails shows the diversity of a job as an academic – research, outreach, teaching, and administration.

7.00am: We put on our scuba boots and enter the mangrove.

The coast can be a harsh environment, and is not kind on our instruments. We spend a couple of minutes trying to open a clamp around the instruments that has rusted and become covered in barnacles. A lot of field research is banging things until they work!

The instruments are spread throughout the mangrove forest, so as we are walking between the sites it’s a good opportunity to observe the mangrove and see if there have been any recent changes. There are a lot of new seedlings growing at the moment, which is a good sign for mangrove regeneration.

We finish up our work about three hours later, wash off our boots and head home to clean up. Later this afternoon, one of our postdoctoral researchers will take the first look at the data.

11.30am: I cycle to the office. I live near a park connector, so the first part is flat and easy. However, the main National University of Singapore (NUS) campus is on Kent Ridge, so the second part is a little harder!

12.00pm: My first meeting is with a commercial company interested in investing in nature-based solutions. The rapid pace of interest in nature-based solutions from all sorts of different stakeholders is staggering! While previously mangrove conservation was a discussion between academics, non-governmental organisations and some government agencies, in the last two years it has exploded in the corporate world, as many companies set net-zero emissions targets. We are now speaking to a completely new audience, who want to quickly implement mangrove conservation and restoration projects to help them offset their greenhouse gas emissions.

We meet regularly with such companies, and we are always clear to communicate the challenges of nature-based solutions. It is a relatively new concept with only a handful of pilot studies, so there is potentially some financial risk investing in nature-based solutions, compared to other investment opportunities. But there are a number of commercial stakeholders we work with who are taking these risks and challenges seriously, and want to do something that will supplement their decarbonisation efforts while conserving and restoring our coastal environment. 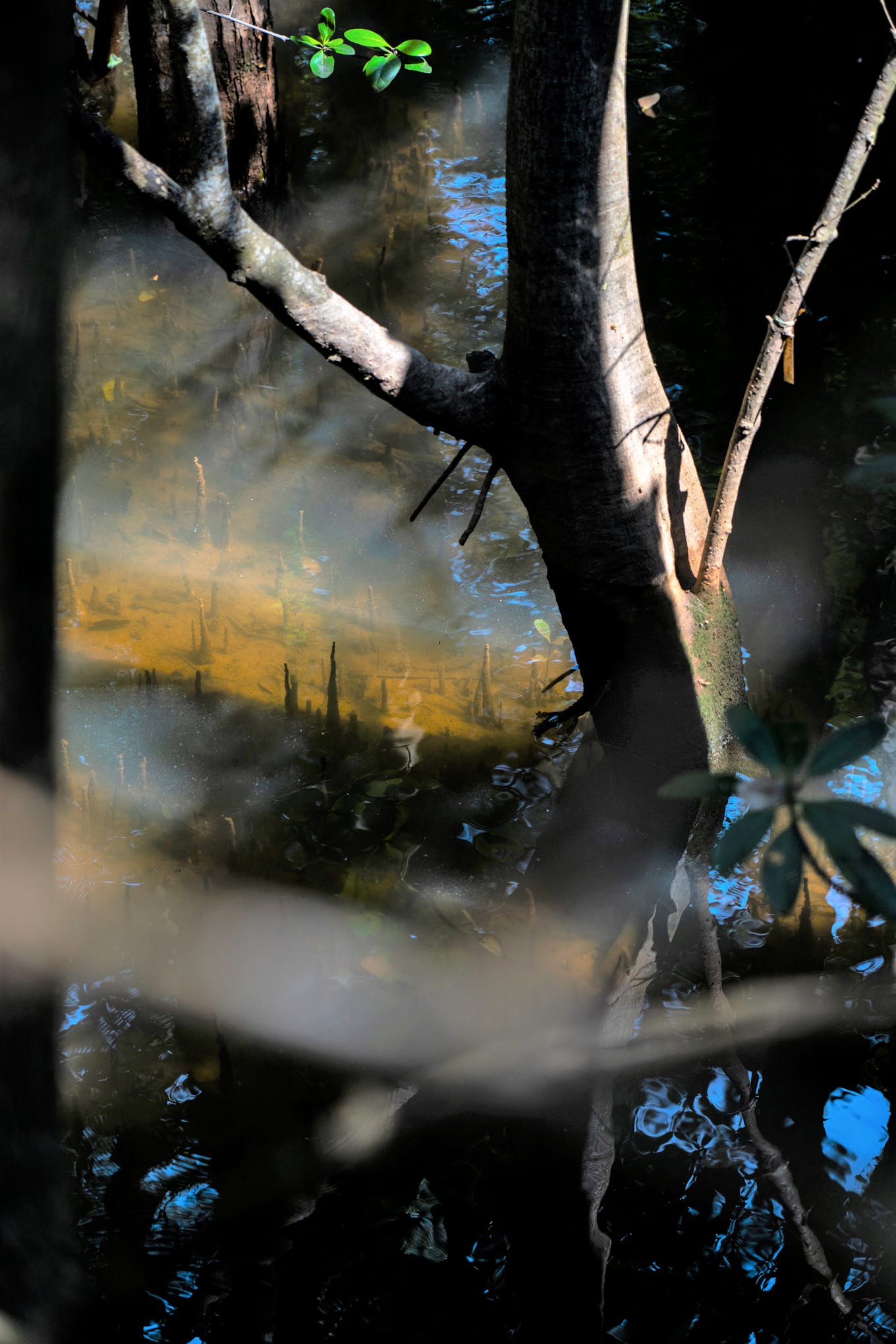 1.00pm: I take some time to grab lunch from one of the NUS canteens. It’s also a chance to scroll through Twitter. This has become a great resource to connect with the global research community, start new collaborations, communicate with the public and other stakeholders, and find out what is going on in conservation around the world. My own Twitter feed is mostly photos of mangroves!

1.30pm: I’m meeting with one of our graduate student researchers to discuss the progress of her PhD. She recently returned from the Sundarbans – one of the world’s largest mangroves that stretches 10,000 square kilometres across the border of India and Bangladesh. These mangroves are facing some severe erosion issues, and today we are discussing data from interviews she undertook with local communities about the impacts they are facing.

3.00pm: One of the true pleasures of being an academic is the opportunity to teach! This semester, I’m teaching a final-year undergraduate module on coastal management. This is a fun module to teach because it is interdisciplinary, covering both the environmental and human aspects of our coastline, and how we balance the competing demands on the coast.

Today’s class is on mangrove restoration. We’ve lost about 30 per cent of our mangroves globally, and many countries have set ambitious targets to bring them back – for example, Indonesia plans to restore 600,000 hectares of mangroves over the coming years. However, rates of restoration success in Southeast Asia are notoriously low.

In this class, we are talking about how we can improve the success rates of mangrove restoration. I try to make my classes as interactive as possible, and today students are working together in groups to come up with a restoration plan for Pulau Ubin. This is based on a mangrove restoration project now led by the National Parks Board and supported by the Restore Ubin Mangroves Initiative. I am looking for some good suggestions from the students!

6.00pm: The cycle back home is always a lot slower than in the morning, but it’s a nice way to reflect on what has happened during the day.

7.00pm: Evenings might be meeting friends for dinner or cooking at home. But a couple of times a month there is an engagement event with Singapore’s environmental community. It might be meeting about an Environmental Impact Study with a government agency for an upcoming urban development, or an evening seminar hosted by students at NUS or Nanyang Technological University (NTU).

11.00pm: Off to bed, though no fieldwork tomorrow so that alarm can go off later than it did this morning!

In her new role at IFC, Horowitz says climate will be her key focus. The World Bank Group’s investment arm, however, has been in the limelight this year for engaging in a few controversial projects, including for bankrolling a coal boom in the Philippines.
International Finance Corporation appoints Ruth Horowitz as Asia chief