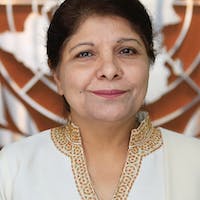 Formerly the Secretary-General's Senior Advisor on Economics and Finance, and Assistant Secretary-General for Economic Development at the Department of Economic and Social Affairs, she led the UN-wide coordination of the post-2015 development agenda and related policy and normative work, including supporting work on the Sustainable Financing Strategy.

Ms. Akhtar has previously served as Governor of the Central Bank of Pakistan, and recently also as Vice President of the Middle East and North Africa Region of the World Bank. In her capacity as Governor, Ms. Akhtar was also the Chairperson of the Central Bank Board and its affiliates, as well as a Governor of the IMF. During her term of office, she was recognized for the success of the Bank, which was restructured significantly; the introduction of an analytical framework for monetary policy; and the development of a ten-year vision for the finance industry, with a vibrant structure for the banking sector. For these accomplishments, she won two consecutive awards as Asia's Best Central Bank Governor from Emerging Markets and from the Banker’s Trust. In 2008, The Wall Street Journal Asia also recognized her as one of the top ten professional women of Asia.

Ms. Akhtar has had a long-standing career with the Multilateral Development Banks (MDBs). In her assignment for the World Bank, she spearheaded the Bank’s response to the Arab Spring, as well as the Arab regional integration strategy and its implementation. She has served in the Asian Development Bank (ADB) for almost 15 years, rising through the ranks from Senior Economist, to attaining the highest professional positions, including as Special Senior Advisor to the President of ADB, and as the Bank’s Director-General of the South-East Asia region. During the Asian financial crisis she also served as ADB’s Coordinator to the APEC Finance Ministers, providing analytical support in a number of economic and social areas for crisis prevention and mitigation, while also leading engagement with the Bank for International Settlement, and other standard-setting bodies.

Ms. Akhtar has worked in several regions and many countries, dealing with fiscal and taxation policy, decentralization, poverty and inequality, financial and monetary policy, industrial and infrastructure policies, as well as governance development. She has also served as a member of the Pakistan Economic Advisory Committee and of the Governing Council of the Pakistan Statistics Bureau. In addition, Ms. Akhtar has advised development agencies on the operationalization of Pakistan’s New Economic Growth Framework, and has also worked on PPP policy frameworks and governance issues.

Here’s how to propel a green recovery for the poorest

Here’s how to propel a green recovery for the poorest

Fighting inequality in Asia and the Pacific

Fighting inequality in Asia and the Pacific

Towards safe, orderly and regular migration in Asia Pacific

Towards safe, orderly and regular migration in Asia Pacific

Towards a resource-efficient and pollution-free Asia-Pacific

Towards a resource-efficient and pollution-free Asia-Pacific

Can economic stability bring about inclusive progress in Asia-Pacific?

Can economic stability bring about inclusive progress in Asia-Pacific?

The key to sustainable growth in Asia Pacific

The key to sustainable growth in Asia Pacific