From Greenpeace's drones to NASA's satellites, eyes in the sky are revealing the extent of forest fires in Southeast Asia. The bad news: southern New Guinea is now also a hotspot.

With the help of “eyes in the sky”, Greenpeace Southeast Asia has shot a video that shows some of the origins of the smoke that has enveloped several countries in Southeast Asia for more than a month now.

The aerial footage, taken with the help of drones by the environmental group’s field researchers from September 19 to 21, was shot at the edges of the Gunung Palung National Park, a 900-square kilometre forest landscape and a major biodiversity reservoir in West Kalimantan, Indonesia, Greenpeace said in a statement.

The fires burning in the deep peat surrounding the national park is close to land concessions that have been logged and deforested for palm oil and pulp plantations, it added.

While the haze has kept people in their homes, it has also put a spotlight on wildlife whose habitats have been destroyed by the forest fires.

One of these groups is wild orangutans, a critically endangered species surviving in one of the last remaining forests in Kalimantan’s Gunung Palung National Park. The forest park has become an ecological island in Borneo after peatland surrounding it was converted to plantations.

Another group is Sumatran tigers, whose home in Tesso Nilo National Park in Riau, Sumutra, has also experienced widespread fires.

After 30 hectares of BOSF’s Orangutan Reintroduction Centre in the area caught fire in early September, another fire on September 23 spread at the organisation’s new orangutan enclosures, which fortunately was still empty, BOSF said in a statement.

However, when the fire changed direction, it headed towards BOSF’s 159 hectares of land that was planted with more than 750 endangered tree species meant for conservation and research, it added.

“We lost a significant part of that land through this fire outbreak,” it noted. 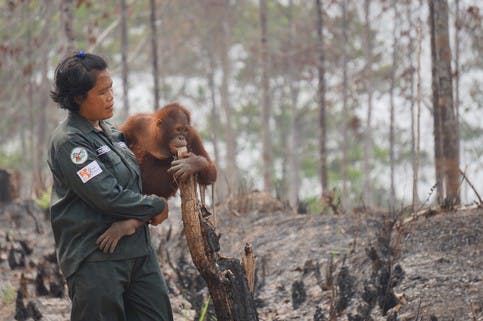 The foundation is seeking help to save orangutans habitats. “Forest fires have severely damaged or cleared large swathes of orangutan habitat across Kalimantan. Our teams are still fighting fires to protect orangutans and natural habitat and we need basic equipment  such as rakes, hoes, water pumps and hose, goggles, masks and protective clothing,” BOSF posted on its website on Wednesday.

Bustar Maitar, Indonesian forest project leader for Greenpeace, said the Indonesian government can no longer turn a blind eye to what is happening on the ground, as the implications affect communities as far as those in Thailand and possibly, Philippines and Cambodia.

“As governments prepare to meet in Paris to save the world from catastrophic warming, the earth in Indonesia is already on fire. Companies destroying forests and draining peatland have made Indonesia’s landscape into a huge carbon bomb, and the drought has given it a thousand fuses,” stressed Maitar.

The United States space agency NASA also captured several satellite images of the hotspots in Sumatra and New Guinea on September 22 and 24, respectively. 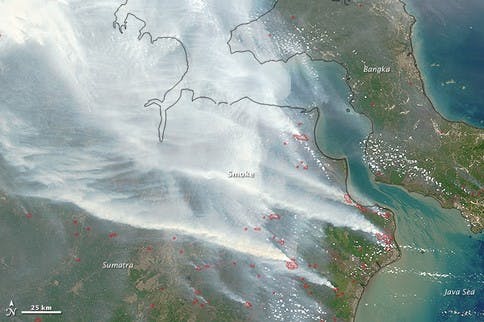 Dozens of fires burning across the island of New Guinea, accompanied by heavy plumes of gray smoke, were captured by a NASA satellite image on September 24, 2015.

The haze has blanketed Papua New Guinea and has reached the Mariana Islands, about 2,500 kilometres to the north, according to media reports.

“The lack of rain and increasing warmth in this region as a result of El Nino may contribute to a greater outbreak in wildfires,” NASA noted. 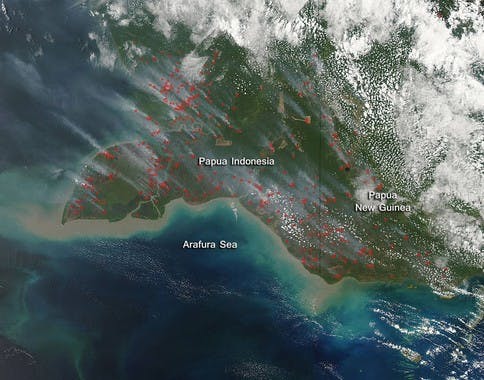 There are no established reports that link the wildfires to deliberate forest clearing for plantations in New Guinea. However, commercial agriculture in the area has been reportedly encroaching on forests recently.

Unilateral policies have failed to curb deforestation, Bustar’s Greenpeace noted, and he urged companies to impose an industry-wide ban on trade with any firm involved in clearing forests.

He commented: “These fires are a harsh reminder of the pulp and palm oil industry’s legacy of destruction. Companies need to rise to the challenge and work together to break the link between commodity production and forest destruction.”