It’s hard to imagine feeling a purer joy than American snowboarder Chloe Kim as she flings herself into a 1080, but Olympic athletes aren’t the only ones who love winter sports. In the winter of 2015 and 2016, more than 20 million people took part in downhill skiing, snowboarding and snowmobiling in the United States.

But, there are no winter sports without winter weather, and humans are on track to warm winter into oblivion. Rising temperatures are melting snow, giving winter athletes fewer places to train and compete, according to a new report from climate advocacy group Protect Our Winters. The report found that climate change also threatens to rob the winter sports industries of billions of dollars in revenue.

“Winter is warming. Snow is declining. And that trend hits our communities in the wallet,” said Auden Schendler, a Protect Our Winters board member. “It’s a story that’s playing out all over the United States this very season.” Over the last century, average December through February temperatures have risen by more than 2 degrees F in the Lower 48. The extra heat has hastened snow melt and caused more precipitation to fall as rain instead of snow.

Diminished snowpack is bad for ski resorts, as well as the hotels, restaurants and sporting goods stores that depend on winter sports to turn a profit. The Protect Our Winters report found that a low snow year can cost the economy more than $1 billion and upwards of 17,000 jobs, compared to the average year. 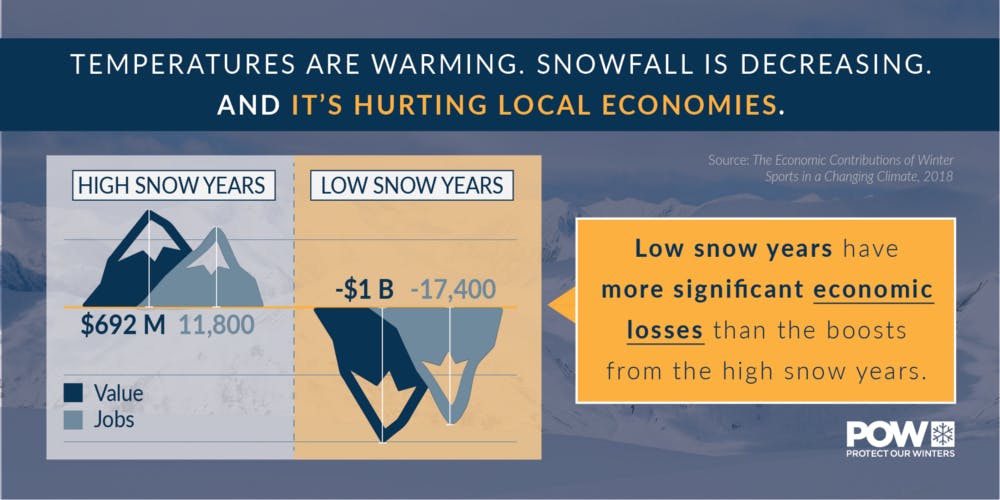 Scientists have chronicled the many ways that climate change is reshaping American winters. In short, the snow’s not doing so hot — or rather, it’s doing too hot. Here are the highlights from the research:

Climate change isn’t just taking a toll on skiing and snowboarding. In Minnesota, ponds aren’t freezing as consistently as they used to, threatening outdoor hockey. Alaska’s Iditarod moved its starting line further north in 2015 due to record-warm temperatures.

Around the world, winter sports are struggling to keep up with climate change. In Bolivia, the retreat of the Chacaltaya glacier forced a popular ski resort to close in 2009. Last year in Canada — where winter temperatures have risen more than 4.5 degrees F since 1950 — a leading summer ski camp closed due to declining snowpack. In Switzerland, snow season now starts later and ends earlier than it did in decades past, and businesses are struggling to keep up.

“I’ve spoken to people in Switzerland who are losing their jobs because winter’s going away,” cross-country skier Jessie Diggins told The New York Times. “Over the last 10 years, it has been hard to ski on real snow. Over the last three years, most venues have been exclusively on man-made snow.”

Athletes and spectators worry how climate change will impact the Winter Olympics. By 2050, nine former host cities may not be reliably cold enough to host the Games — including Sochi and Vancouver. Already, many athletes are having to travel increasingly long distances to find suitable conditions, often to different continents, as longtime training grounds wither in the heat.

“I can see a huge difference,” French skier Ben Cavet told the Associated Press, describing his usual summer training site. “Up on the glacier, now there’s this huge cliff, you know like a big rock, that you couldn’t even see before.”