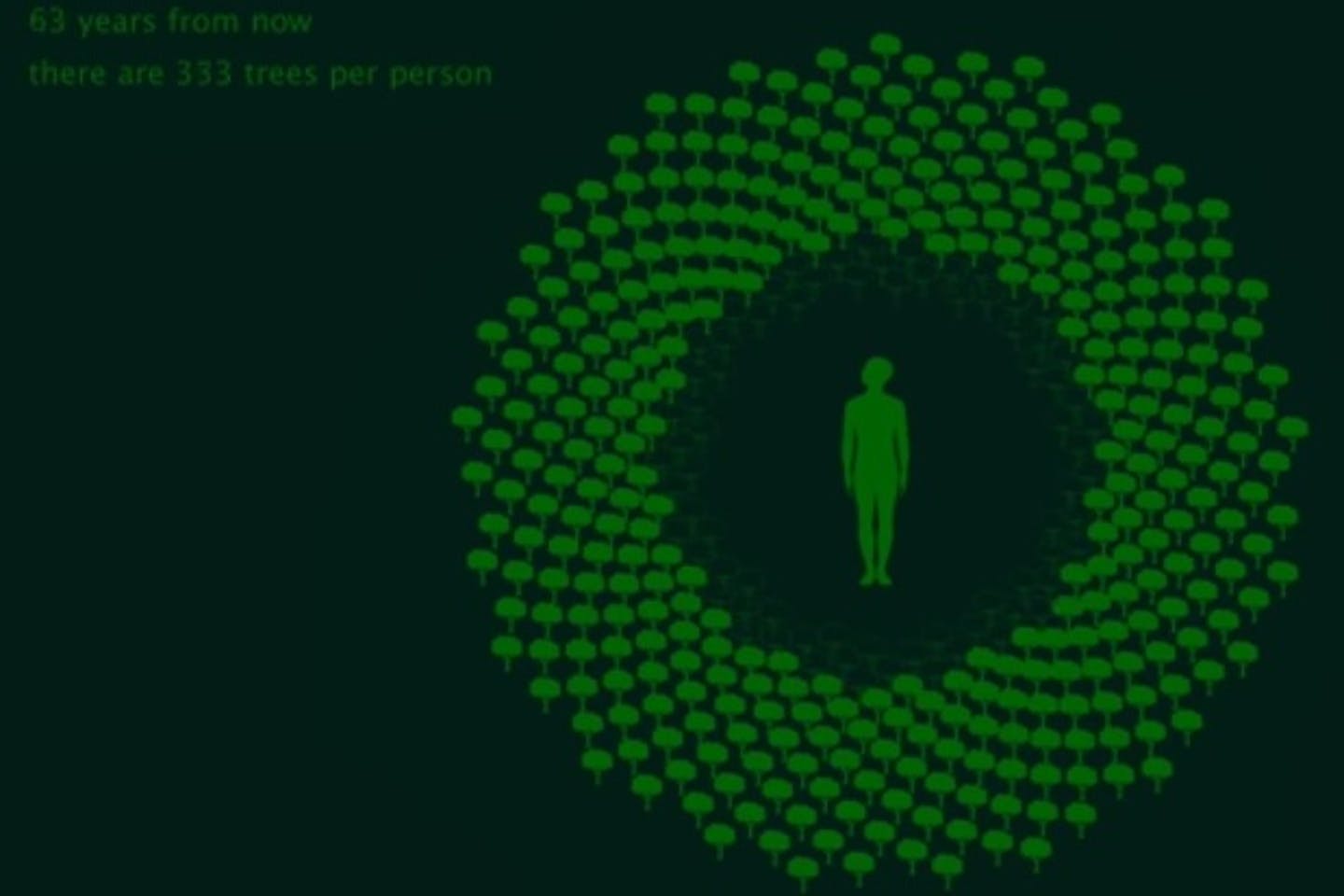 New research suggests there are just over 3tn trees on Earth, which is eight times more than scientists previously thought.

But this isn’t the good news it sounds, as humans are cutting down over 15bn trees every year. On balance, once growth of new trees is taken into account, that means our forests are shrinking by around 10bn trees each year.

The sheer scale of deforestation means we’re eating into the amount of carbon locked up in the world’s forests, the study suggests.

Seeing the forest and the trees

Using satellite images, scientists have previously estimated that there are around 400bn trees on Earth.

But satellites can only ‘see’ trees from above. This means that scientists have to estimate tree numbers based on images of how much of the Earth’s surface is obscured by the leaves and branches of the trees - known as the canopy.

The researchers collected measurements on the ground from almost 430,000 forests in over 50 countries and combined this information with satellite images. Lead author, Dr Thomas Crowther from Yale University, explained at a press briefing yesterday:

“We started to collect information about specific plots where someone has physically been on the ground, counting the number of trees in an area. And then we can link that to the satellite information.”

By matching up counts of tree numbers to the satellite images of the same forest plots, the researchers could then map similar types of forests for every square kilometer of the rest of the Earth’s surface:

Using this method, researchers estimate that there are actually 3.04tn trees on our planet today - or 422 per person. The video below from Nature describes the new research.

The majority of these trees - around 43% - can be found in the tropics, such as in the Amazon rainforest.

Moving away from the equator, 22% of trees are in temperate regions, 24% in boreal areas, and around 3% in the frozen tundra of the Arctic and Antarctic.

You can see the estimates of total numbers of trees by forest type in the table below. Since trees tend to grow best in warm, wet conditions, the researchers expected that they would find more trees in warmer, wetter parts of the world. But it wasn’t as simple as that, Crowther says.

In some regions they found fewer trees in the areas with the most suitable growing conditions. The reason for this, says Crowther, is that in better conditions, humans were more likely to have cleared the forest to make way for agriculture.

If a tree falls in the woods

When the researchers turned their attention to deforestation, they found that since the start of human civilisation around 12,000 years ago, we’ve cut down 45.8% of all our trees.

Bringing this up to the present day, satellite estimates suggest that humans cleared around 192,000 square kilometres of forest every year of the last decade. This translates to 15.3bn trees being cut down annually, the researchers say.

But new trees are added to forests as well - as cleared forests regrow and trees are planted deliberately, says Crowther. This amounts to around 5bn trees per year. Taking this away from the 15bn trees that are cleared leaves an overall net loss of approximately 10bn trees each year.

The scale of this human impact on forests is “astronomical”, Crowther tells Carbon Brief:

“It is extremely concerning to discover the amount of damage that humans have already had and the terrifying rates at which forests are being depleted.”

And this could well get worse in future, added co-author Dr Henry Glick, also from Yale, at the press briefing:

“Tree loss is often tied to timber supplies and land use conversion for agriculture. As global population grows we may see the net loss increase as well.”

The new study was triggered by a request from the Billion Tree Campaign. This is an initiative set up by the United Nations Environment Programme (UNEP) to encourage communities and organisations to plant a billion trees worldwide each year.

As trees absorb around a third of manmade carbon emissions, the project aims to help moderate global temperature rise by adding more and more trees.

In order to know what difference an extra billion trees a year makes, they wanted to know how many there were in the first place, says Crowther.

Although the study has found there are more trees than scientists thought, this doesn’t mean they’ve underestimated how much carbon the forests are holding, Crowther points out:

“I don’t think that our numbers are altering scientists’ perspective of how much carbon is stored in the global forest.”

Rather than discovering new trees or identifying new forests, their study just corrects earlier satellite-based estimates that sometimes mistook forest cover as a few large trees rather than lots of small ones, he says:

“Often the areas with the highest density of trees are dominated by lots of small trees, regenerating trees, or newly-growing trees. These don’t store much carbon compared to one giant tree.”

In other words, despite all these extra trees, the rate of deforestation means the carbon-storing ability of the world’s forests is diminishing.

While nobody expected that the total number of trees worldwide was so high, this hasn’t deterred the efforts of the Billion Tree Programme, says Crowther, in fact it has had the opposite effect:

“Now that they know there are three trillion trees on Earth, and that the number has fallen by almost 50%, they have remade their goals and their new targets are to plant a trillion trees [in total]. They’re massively stepping up their efforts.”

By knowing how many trees we have now, and how many we’ve lost already, we can understand what impact planting an extra billion, 10 billion, or trillion trees can have, Crowther concludes.