Coca-Cola was among the corporations supporting the release, which has been criticised by conservation experts. The release of 1,000 hatchling olive ridley sea turtles on Kuta Beach marked the opening of the global Our Ocean Conference 2018 in Bali, Indonesia.

The mass release of baby turtles the day before the opening of an international marine conservation event in Bali has concerned environmentalists who say the hatchlings were not treated with due care.

One thousand hatchling olive ridley sea turtles, which are classified as vulnerable, were released by scores of tourists, company representatives and volunteers from local conservation groups on Kuta Beach on Sunday morning.

Upon release, most of the hatchlings did not show their characteristic behaviour of scampering towards the waves, and remained motionless on the beach. Participants were then encouraged to pick up the turtles and place them in the sea.

One participant, who did not want to be named, said the baby turtles were kept in buckets filled with water and made to wait on the beach until VIPs arrived.

“By the time that happened, it was already past 8am and the tide was out. Each turtle was put into smaller plastic containers with water so everyone could release one—the turtles were obviously getting very tired.”

She added that some participants were playing with the turtles before releasing them. “By the time they were released on the beach, they weren’t really moving. It was so sad to watch,” she said.

“Eventually the event organiser asked everyone to carry them to the water. People and children were picking them up and taking selfies with them. When placed in the water, some were too tired to swim. Many people were holding onto them for more photos. It was heartbreaking.” 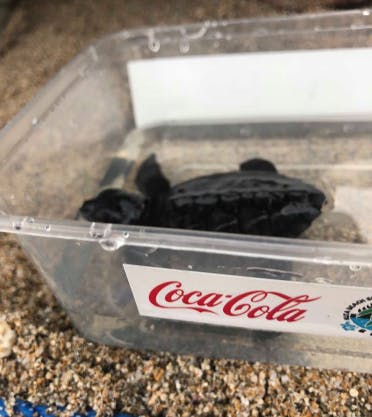 The hatchlings were kept in a plastic containers so that participants could each release a baby turtle.

Dr Uzair Rusli, a lecturer at Universiti Malaysia Terengganu and research affiliate at the Sea Turtle Research Unit (SEATRU) of Institute Oceanography and Environment, faulted the procedure for the release.

Young sea turtles should not be released during the day, as they’re exposed to high temperatures and are more likely to fall victim to predators, he said. And they should not be handled. Sunblock, moisturiser, and the natural oils on human hands can interfere with female hatchlings’ natural process for remembering the beach it was born on, and it will one day return to to nest.

Richard Reina, associate professor of ecophysiology at Monash University and an expert on marine animals, said the usual practice for keeping turtles before release is to contain them on moist sand, covered and in a cool, dark place.

“It is not unusual if they [the turtles] initially look a bit lethargic, as it takes them a few minutes to become active after being held in the dark. But they should then start to crawl enthusiastically and swim vigorously when they reach the water,” he told Eco-Business.

The turtle release came ahead of Indonesia’s annual Our Ocean Conference (OOC), which convenes governments, businesses and civic society groups from all over the world on ocean conservation. The event opened with a clean up of Kuta Beach, one of the world’s most famous seaside tourist destinations. It was supported by corporations including Coca-Cola, Unilever, and Nestlé.