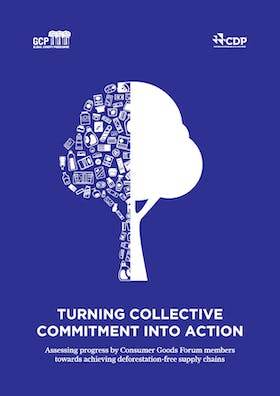 In 2010, acting on behalf of its more than 400 member companies worldwide, the board of the Consumer Goods Forum agreed a resolution on deforestation with the aim of achieving zero net deforestation supply chains by 2020.

The size, influence, and geographical reach of its membership made this a truly remarkable milestone in the fight to tackle deforestation. Indicatively, just 55 of the CGF’s members, assessed as part of the Forest 500, together control 37.3 per cent of the cosmetics and personal care sector worldwide.

Both their collective exposure to deforestation, and their capacity to drive transformative change on the ground, are unparalleled. And the ambition of their commitment to deforestation free supply chains has helped catalyse pledges and supporting action by other companies, financial institutions and governments.

What is harder to assess, with less than four years to 2020, is the progress of individual CGF members towards fulfilling their collective commitment - a question that this short report addresses, drawing on data from two initiatives collaborating on addressing deforestation in supply chains: the Global Canopy Programme’s Forest 500 and CDP’s forests program.

Assessing progress using a five-step framework, designed to help companies move from making high level commitments on deforestation to embedding and implementing these at the company level, the report finds that:

A larger number of CGF members than non-members are acknowledging deforestation-related risks in their supply chains (step 2). 89 per cent of the 44 CGF members that disclosed to CDP’s forests program in 2015 identify at least one reputational, operational or regulatory risk that has the potential to generate a substantive change in business operations, revenue or expenditure.

Particularly strong progress on commodity-specific policies has been made by CGF members in relation to their palm oil supply chains (step 3). 79 per cent of the assessed CGF members that are exposed to palm oil have a relevant sustainability policy in place. Attention now needs to turn to other commodities – in particular, cattle products and soya, for which only one third of assessed CGF members have policies.

Greater engagement with, and auditing of, suppliers is needed (steps 4 and 5). Nearly 75 per cent of CGF members that disclose to CDP’s forests program and have a procurement standard state that their standard affects their supplier engagement strategy. However, relatively few CGF members are auditing their suppliers, particularly in relation to their soya and cattle supply chains. In order to become less reliant on certification credits and move towards more meaningful, direct sourcing of deforestation-free commodities, companies need to engage more actively with their suppliers and thoroughly audit their compliance.

CGF members are reporting more on their progress towards fulfilling their commitments on deforestation than non-members (step 5), with nearly half of the members requested to disclose by CDP’s forests program responding. The expansion of this group to include the 46 CGF members that did not respond to CDP in 2015 would be a significant positive development.

These results show that, while CGF members are leading across all key steps in the process towards implementation, there are still significant gaps to be addressed in order for the CGF to be on course to realise its ambitious goal of deforestation-free supply chains amongst its members by 2020.