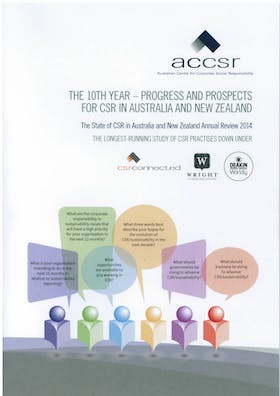 Despite awareness, the implementation of CSR is still markedly slow.

2014 marks the tenth anniversary of ACCSR’s establishment as one of Australia’s earliest consultancies developed to meet the needs of the emerging management practise of CSR.

Participants in this year’s The State of CSR Annual Review– a record 990 of them – have noted some achievements over the last decade, such as raising awareness of CSR and the proliferation of implementation frameworks and tools. But they are not happy with the pace of progress within their organisations.

Many survey respondents attribute the slow progress in CSR implementation to an unsympathetic public policy environment and lack of leadership.

Respondents to the survey are calling for more leadership from business, government and the academic sector. They hope that CSR will have more government support and believe that mainstreaming would be assisted by more mandatory CSR actions.