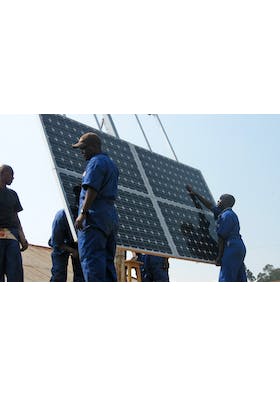 The Smart Villages Initiative brings together key players—entrepreneurs, scientists and engineers, villagers, NGOs, financiers, civil society and development organisations, policymakers, and regulators—from the frontline of delivering off-grid energy for development to rural communities in order to identify current barriers and how they can be overcome.

Findings and recommendations from engagement events in six regions of the developing world (East and West Africa, South and Southeast Asia, South and Central America) will be synthesised and communicated to the policy and development communities to inform the creation of more effective policies and interventions.

The ultimate aim is to enable the development of smart villages as a rural analogue to smart cities, providing villagers the opportunity to lead fulfilling and prosperous lives.

Following a three-year scoping phase from 2011 to 2014, the current three-year phase of the Smart Villages Initiative commenced in September 2014.

This report provides a mid-phase summary of the findings from the engagement events held during the first 18 months: an up-to-date view from the frontline to inform policymakers, development organisations, and other stakeholders, and to help identify key questions and issues that will be addressed in the second half of the current phase.

Fifteen workshops have been held across East Africa, South and Southeast Asia, and South America, and also at the University of Cambridge in the United Kingdom. These workshops have brought together over 600 frontline players and researchers in stimulating and insightful discussions over the 18-month period. As reflected in this report, many of these discussions have focused on the challenges of bringing sustainable energy services to rural communities.

Over the next 18 months, the focus of discussions will shift increasingly to how those energy services can be used to enhance the welfare of villagers and to establish smart villages providing key services (education, healthcare, clean water and sanitation, etc.) and increased incomes through productive enterprises, and which are resilient to natural, social, and economic shocks.

The off-grid energy systems evaluated by the Smart Villages Initiative include pico solar, solar home systems, mini-grids, and cookstoves. Several issues have emerged that relate to all technologies, which are summarised in the next section. Sections 3 and 4 then look in turn at issues specific to home-based electricity systems (pico solar and solar home systems) and to mini-grids. Section 5 summarises findings to date on cookstoves.