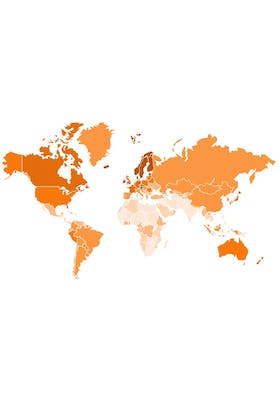 SolAbility releases the rankings of the 5th edition of the Global Sustainable Competitiveness Index (GSCI). The GSCI is based on an inclusive competitiveness model, analysing 109 indicators.

In order to exclude any subjectivity, all indicators are measurable, quantitative indictors derived from the World Bank and UN databases. The GSCI 2016 is topped by Sweden, followed by the other 4 Scandinavia nations. Countries from Northern Europe, the Baltic States and Eastern Europe dominate the top 20. The only non-European economies in the top 20 are New Zealand (12) and Japan (15).

The World’s largest economies show a mixed picture: Germany is ranked 14, Japan 15, the UK 21, and the US 32. The US is scoring particularly low in social issues, and resource intensity – indicating not only development potential, but also cost reduction opportunities.

Of the BRIC countries, China scores highest on rank 37, Brazil 41, Russia 45, and India 153. Social cohesion is the basis for any working economy. China is amongst the leading Nations when it comes to Intellectual capital and investments; however, the combination of limited natural resources, arid areas, and low resource efficiency could possibly jeopardise the future development of the country.

While there seems to be a certain correlation between the rankings of this index to current wealth levels as expressed in the GDP, these correlations are superficial. Some of the World’s richest countries, particularly the oil-rich countries of the Middle East, score significantly lower on the index than their GDP output would suggest. Some of the nominally poorest countries, on the other hand (e.g. Bhutan, Bolivia, Laos) are ranked considerably higher than their current GDP would indicate.