The case for a deposit scheme in Singapore 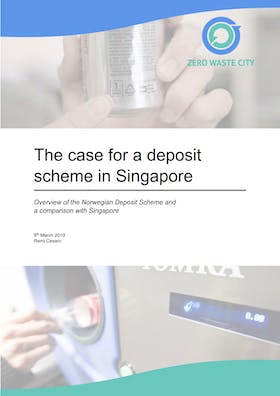 Plastic waste is a growing concern worldwide. Recent publications and reports have highlighted the significant risk related to the mismanagement of plastic for the environment, human health, and the communities. Also, the growing demand for plastic along with the depletion of resources raise concerns about the sustainability of the current modes of consumption.

It was estimated that, up to 2015, 6.3 billion metric tonnes of plastic waste had been generated worldwide. Around 9 per cent of which was recycled, 12 per cent was incinerated, and 79 per cent was accumulated in landfills or the natural environment.

These figures are representative of some of the challenges faced for the recovery of plastic:

Among the many initiatives which have been implemented worldwide for the collection and the recycling of plastic waste, Norway is often mentioned as the best example. Implemented in 1999, the Container Deposit Return (CDR) scheme is considered as one of the most efficient and cost-effective systems. In 2017, the return rate of PET bottles (bottles returned to the outlet versus bottle sold) was at 86.1 per cent.

Despite their differences, Singapore and Norway share many similarities such as the total population, the overall wealth, and a common ambition to promote sustainable practices. These similarities suggest that a deposit scheme similar to Norway could be successful in Singapore as well.