The carbon reduction opportunity of moving to the cloud for APAC 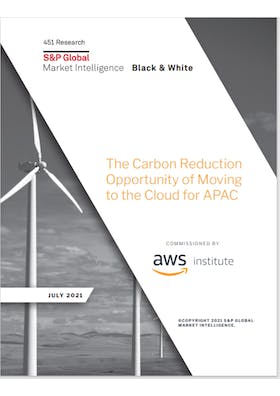 A move to the cloud should be a part of any organisation’s sustainability strategy as a major source of energy use and carbon emissions for enterprises and public sector organisations is self-owned and operated IT equipment and data centers.

IT efficiency and sustainability are becoming increasingly critical considerations and priorities for businesses and governments around the world. In an AWS Institute commissioned report, 451 Research, a part of S&P Global Market Intelligence combined surveyed APAC countries data results, along with analysis and third-party industry data, to model a ‘chip to grid’ view of efficiency that estimated the energy used by typical workloads in on-premises (self-owned and operated) servers and data centers on average.

The findings of the study reveals an average of nearly 79 per cent reduction in energy use from running business applications in the cloud rather than on premise enterprise data center and estimates that cloud data centers perform at nearly five times the energy efficiency of the average of surveyed APAC enterprises.