Sustainable Cities: From Possibility to Reality 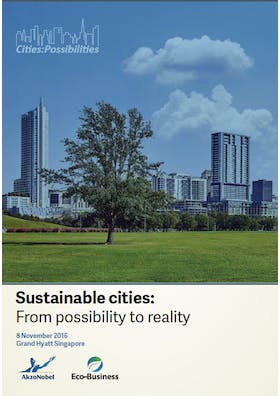 There are two challenges that future generations will remember the 21st century for - urbanisation and climate change. For centuries, cities have been at the centre of civilisation and human progress. Because cities are where the future is, urban environments need to evolve to match human aspirations.

Today, half the world’s population lives in cities and this proportion will rise to 75 per cent by 2050, according to United Nations estimates. As people move from villages to cities on an unprecedented scale – and cities double their collective size – the world must seek better ways to solve urban problems such as overcrowding, pollution and inadequate public services.

On climate change, 2016 has seen incredible momentum in tackling this global challenge, from the Paris Agreement’s entry into force, to the global aviation deal to curb emissions, to the international treaty to phase out hydrofluorocarbons, the “super greenhouse gases” found in refrigerators and air-conditioning units.

Yet recent studies by PwC show that even if the rate of global decarbonisation were to double, the world would still be on course for 6 degrees Celsius of warming by the end of the century.

The good news is that countries around the world have started to grasp the seriousness of the risks. Governments are beginning to forcefully shift their economies towards less energy-intensive, more environmentally sustainable technologies, while companies are awakening to the need to change the way they operate so as to thrive in the coming decades.

Underlying all of this is the question – what can we do to ensure our cities are liveable and sustainable?

To answer these questions and discuss the innovations that will make sustainable cities possible, Dutch manufacturing company AkzoNobel and sustainability media firm Eco-Business held the inaugural Cities:Possibilities forum on 8 November 2016. Read this outcome report for highlights from this insightful dialogue.