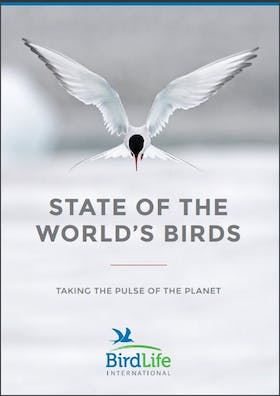 With the tagline “Taking the Pulse of the Planet”, State of the World’s Birds is a major global assessment that uses bird species to measure the health of our ecosystems as a whole. Five years in the making, this comprehensive report shows that many of the world’s 11,000 bird species are in dire straits. At least 40 per cent of these species are in decline, and one in eight bird species is globally threatened with extinction.

The continued deterioration of the world’s birds is a major concern for the health of our planet; birds provide a wide variety of ecosystem services, such as controlling insect pest populations, and dispersing plant seeds. Vultures, one of the most threatened bird groups, provide crucial sanitary services across South Asia and Africa through the disposal of animal carcasses.

Bird population trends often mirror those of other species, and are highly responsive to environmental change. As such, as one of the most studied groups of life, birds act as the “canaries in the coalmine”, reflecting a wider environmental malaise.