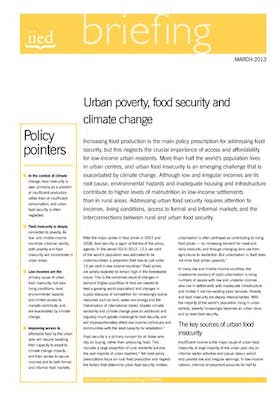 Increasing food production is the main policy prescription for addressing food security, but this neglects the crucial importance of access and affordability for low-income urban residents. This according to the latest report published by the International Institute for Environment and Development (IIED).

More than half the world’s population now live in urban areas, and in the next 40 years virtually all global population growth will be in cities and towns of low and middle-income countries in Africa and Asia. Food security initiatives and policies need to take this into account and address both the production and consumption dimensions.

Income poverty is the root cause of urban poverty and of urban food insecurity. Access to decent and stable employment is clearly the first priority.

“Food security is back on the agenda thanks to rising prices and the threat that climate change poses to agricultural production,” says the report’s author Dr Cecilia Tacoli. “But policies that focus on rural food production alone will not tackle the rising food insecurity in urban areas. We also need policies that improve poor people’s ability to access and afford food, especially in urban areas.”

Most people in urban areas must buy their food and this makes the urban poor particularly at risk. Any climate-induced disruption to food production, transport and storage – either in the urban area itself or in distant farmland – can affect food supplies and prices in urban areas.

Yet most policies that aim to increase food security focus solely on boosting production from farms and fisheries in rural areas.

“The journey that food takes from a rural producer to an urban consumer involves many steps,” says Dr Tacoli. “It must travel through formal and informal systems as it is stored, distributed and sold. Each one of these steps is a point of potential vulnerability to climate change. For consumers, this will mean sharp and sudden increases in food prices”

The report highlights the link between income poverty and food insecurity in urban areas. For most low-income urban citizens food represents a sizeable portion of the money they spend. Even small increases in price would therefore have big impacts of food security, with citizens reducing the amount and quality of the food they buy.

For the residents of informal urban settlements, food insecurity is also the consequence of lack of space to store and cook food, lack of time to shop and prepare meals, inadequate access to clean water and often non-existing sewage systems. These settlements are disproportionately affected by floods, typhoons, heat waves and other impacts of climate change because they tend to be located in areas more exposed to these events, and because they lack the most basic infrastructure.

Tacoli says that governments must rise to these challenges by ensuring that policies can protect the urban poor from food insecurity linked to rising prices, inadequate living conditions and the effects of climate change in both rural and urban areas. Decent and stable employment is essential but not sufficient: adequate infrastructure and housing and access to formal and informal markets are just as important.