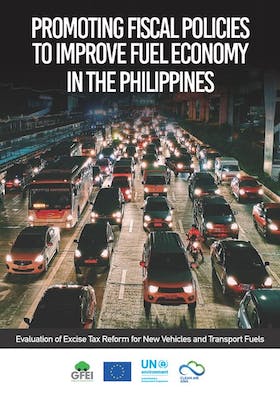 The use of fiscal policies can be an effective means to promote sustainability in the transport sector. Such policies can help to reduce wasteful consumption of fossil fuels in the transport sector, alleviate rapid motorization, contribute towards improving the efficiency of transport systems, and contribute to the internalization of associated environmental and health costs, such as those from air pollution. Air pollution is a key environmental concern for the Philippines and places a major burden on the health of citizens.

The Department of Finance (DOF) of the Republic of the Philippines is pursuing several fiscal policy reforms in the country. In December 2017, the current administration signed into law Republic Act No.10963, otherwise known as the Tax Reform for Acceleration and Inclusion (TRAIN) Act, which is the first of the five planned tax reform packages in the Comprehensive Tax Reform Program of the current administration. The first package amends select provisions of the National Internal Revenue Code of 1997 and contains the fuel and vehicle excise tax reform.

Such fuel and vehicle excise tax reforms can potentially contribute towards mitigating the negative impacts of transportation, such as on energy use and on the environment, by influencing consumer choice and consumption behavior. This study analyses the impact of the vehicle and fuel excise tax reform of the amended version of one of the bills originally proposed by DOF, henceforth referred to as House Bill No. 4774 or the “price-based” taxation on the fuel economy of newly registered light duty vehicles until the year 2020 using the Fuel Economy Policies Implementation Tool developed by the International Energy Agency. The study then estimates the impacts of the improved fuel economy on energy use, emissions, and fuel costs from road transport using the Asian Development Bank’s Transport DataBank Model. Finally, the study suggests an alternative vehicle taxation scheme, which aims at providing more incentive to the consumers to purchase more fuel-efficient vehicles while ensuring a similar level of tax revenues.