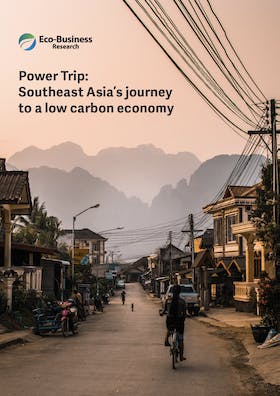 A new ground-breaking study launched by Eco-Business puts a spotlight on Southeast Asia’s transition to the low carbon economy and identifies the top challenges for the region as insufficient regulation and the lack of access to funding.

Southeast Asia is one of the most vulnerable regions in the world to climate change, with coastlines and densely populated low-lying areas that are increasingly threatened by rising sea levels. The Intergovernmental Panel on Climate Change (IPCC) observed earlier this month that humanity is already experiencing the consequences of 1 degree of global warming through more extreme weather events – nowhere is this felt more deeply than in Southeast Asia.

Not only does climate change endanger the environment and human lives, it is also predicted by the Asian Development Bank (ADB) to shave 11 per cent off the region’s GDP by the end of the century if left unchecked.

In response to these challenges, Southeast Asian countries are beginning to transform the way energy is produced and consumed in order to transition to a low carbon, sustainable economy. This includes switching to clean energy sources, reducing emissions, and re-evaluating businesses and assets which may be exposed to the effects of climate change.

This new report, Power Trip: Southeast Asia’s journey to the low carbon economy, outlines the region’s journey in making the energy transition in order to better understand the challenges countries are facing.

The report also forecasts what the Southeast Asia business landscape might look like by 2030 as companies take advantage of the opportunities that arise from the low carbon economy.

Launched at the Asia Clean Energy Summit 2018, this report is the first of its kind in Southeast Asia that outlines the drivers and barriers faced by specific countries in the region in their transition. This report surveyed 562 senior government, business and civic society executives from Indonesia, Malaysia, Thailand, the Philippines, Singapore and Vietnam between August and September 2018.

Here are some key findings from the survey: