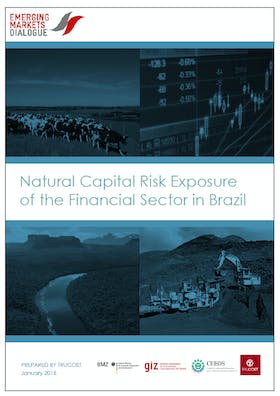 Brazil’s financial sector is dependent on natural capital to support economic growth and ensure future returns for investors. Nature’s assets are abundant in Brazil, from its farmland, forests and energy reserves to its ecosystem services such as the rainforest which helps regulate weather patterns.

However, there is mounting demand and supply side pressures on natural capital, including a rapidly growing population and deforestation. This renders natural capital increasingly scarce, leading to reduced crop yields, increasing input costs and disruption to supply chains. At the same time, there are financial and reputational risks for high-impact, high-dependence companies from the Brazilian government’s strengthening legislation to make companies pay for their environmental impacts and make banks more accountable for their financing decisions.

Investors and credit analysts are in need of better data and tools to integrate natural capital risks into investment and financing analysis in order to protect returns in the future. At the same time, there exists an opportunity for the financial sector to capitalise on the growing market for more sustainable and resource efficient business models. It can do this through investing in ‘best-inclass’ companies which better manage their environmental impacts, and by diversifying their portfolios to sectors that should benefit from changing consumer demand and environmental legislation.

Key findings from the report include: