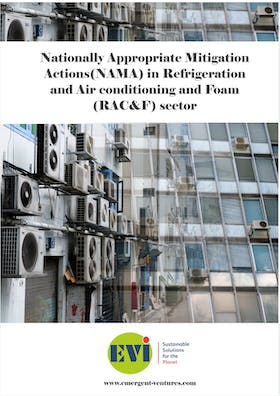 CFCs and HCFCs have high Ozone Depleting Potential (ODP) and very high Global Warming Potential (GWP). They are regulated by the Montreal Protocol rather than by the Kyoto Protocol. HFCs are one of the alternatives to HCFCs in refrigeration, air conditioning and foam blowing.

HFCs do not deplete the ozone layer i.e. their Ozone Depleting Potential[1] (ODP) is zero. However, they have a high Global Warming Potential[2] (GWP) and contribute significantly to climate change. The implications of their powerful greenhouse properties are therefore one factor which must be considered in selecting alternatives and developing phase-out strategies.

Nationally Appropriate Mitigation Actions (NAMAs) in RAC&F sector are increasingly being seen as one of the cornerstones scaling up both mitigation actions and the pursuit of socio-economic development in the implementing country.

[1]The ozone-depleting potential (ODP) of a chemical is a measure of its relative ability to destroy stratospheric ozone – compared to Chlorofluorocarbon, CFC-11, which has an ODP = 1.0.

[2]Global warming potential (GWP) represents the “strength” of a gas in terms of impact on global warming – compared to CO2 which has a GWP = 1.