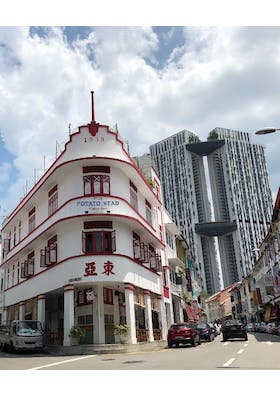 The global fight against climate change is gradually gaining momentum, with countries like Canada, China, Germany, India, Japan, and the EU reaffirming commitment to the Paris Agreement, and more than 80 mayors in the US confirming that they will continue with agreed guidelines.

The UK has put Clean Growth at the heart of its industrial strategy, and last week even the Trump Administration announced that it will join the One Trillion Trees Initiative. While companies such as Amazon, Nestlé, and Unilever have set targets for carbon neutrality, Microsoft just announced that it will become carbon negative by around 2030, and remove all the carbon the company has emitted since its founding in 1975. Companies such as Autodesk, Bloomberg, HP and Salesforce are also examining emerging technologies to reduce greenhouse gas emissions (GHG).

Climate change considerations are also fast becoming a cornerstone in Singapore’s national development. The country has committed to unconditionally reducing GHG emissions intensity by 36 per cent from 2005 levels, and to peak its carbon emissions by 2030. Its climate mitigation efforts have included converting to natural gas for electricity generation, investing in electric vehicle infrastructure, introducing an economy-wide carbon tax, and controlling the vehicle population just as it invests in growing its public and shared transport networks.

Singapore’s finance sector is reducing support for coal-related businesses, in favour of green bonds and ESG investing. There are both government-led and ground-up campaigns to encourage Singaporeans to improve energy efficiency and reduce waste. To adapting to the climate crisis, Singapore is investing in reforestation, building seawalls and restoring mangroves to protect its coastlines, and improving flood resilience by upgrading its waterways infrastructure.

While we are all familiar with the social implications of climate change – homes are displaced, lives are lost from natural disasters, and poverty and hunger become more widespread – few studies explore how a low-carbon alternative could also exacerbate societal vulnerabilities.

Based on Eden’s scenarios of Singapore’s possible transition to a low-carbon economy, we expect that disruptions like higher emissions taxes, an increase in ESG investments, a proliferation of green technologies such as electric vehicles, and the maturation of a circular economy could result in new regulations, new norms, new applications, and even a fundamental restructuring of the economy.

In the capital markets, retail investors may not be savvy enough to tap into the burgeoning interest in ESG investing. Should energy producers experience higher costs from carbon offsets, incur fines from excessive polluting, or face impairment charges on their stranded assets as they transform their energy mix, local shareholders that are dependent on steady dividend yields for their incomes may find their retirement plans affected.

An energy transition scenario will require capital to be re-allocated strategically to emergent technologies, operating methods, and business models; global energy supply chains to be fundamentally transformed such as in the fuel logistics of recycling plastics and tires as feedstock for waste-to-energy conversion; and new markets to be developed. Energy companies in Singapore that are not at the cutting edge of such global advancements will find their competitiveness eroded.

A low carbon economy will demand new skills both upstream and downstream. Instead of chemical engineers or refinery operations executives, the ‘green jobs’ of the future may include roles such as solar engineers, energy contract analysts, sustainability directors, waste operations managers, as well as ESG and compliance assessors. Proactive planning for new competencies in the sector will make the difference between structural unemployment and meaningful, high value-added work.

Consumers will have the opportunity to participate as producers of solar power that they can sell to the grid. Lesser-skilled or apathetic citizens, rank-and-file workers busying themselves with bread-and-butter issues, or the elderly may lack awareness or knowledge such as reading advanced electricity meters, understanding their own energy bills and consumption patterns, or setting up seller contracts, and may not be able to participate fully as consumer-producers.

New cultural norms to reduce material consumption could affect demand for products and services. While businesses and consumers will have to grapple with these changes, social groups that are struggling to adjust and survive will be particularly vulnerable. Energy costs may grow in the short run before renewable sources approach minimum efficient scale, or if carbon taxes on energy producers are passed onto consumers.

Utility bills take up a higher proportion of monthly expenses among individuals and families who may already be struggling to make a living. Households who most need to upgrade to more energy efficient devices may not be able to afford to do so. Inflation will be felt even more directly as rising energy costs further result in higher prices in basic goods and services, transport, and food. This could be further compounded as carbon offsets use up arable land, which may affect the supply of farming produce.

Applications such as electric and autonomous vehicles, solar grids, as well as smart building and estate management technologies may be accompanied by mandatory energy labelling schemes, updates on carbon taxes, and new vehicles emissions standards.

Some users may not understand these enough to use them. If there is a stronger push towards electric or low-emission vehicles, drivers of ride-hailing companies that cannot afford to upgrade their vehicles may find their livelihoods threatened. Smaller local enterprises that will need to absorb higher energy costs while navigating new complexities in energy policy requirements could find their margins affected, and risk becoming irrelevant.

As Singapore’s policies, technologies, and norms lead us towards a low-carbon future, we need to plan for possible fractures in society that may inadvertently arise during this transition. Market forces will not be able to, at least during the initial stages, prevent these vulnerable communities from falling through the cracks.

A concerted effort by socially-responsible corporations, social sector organisations, and the government will be critical in ensuring that thorough public communications, campaigns to promote energy-saving behaviour, peer support networks, aid packages, grant schemes, learning and training packages, change management support, and alternative pathways are put in place to ensure that vulnerable groups are not left behind.

Singapore has an opportunity to once again showcase its leadership, in driving an inclusive journey towards a low-carbon future.