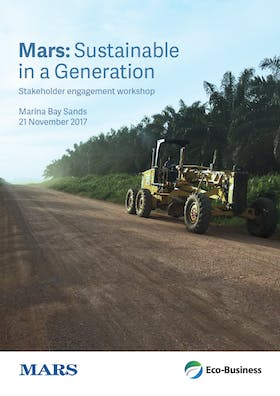 On November 22nd, Mars Wrigley unveiled its Sustainable in a Generation plan for Asia Pacific that will accelerate its efforts in traceable palm oil sourcing, training for cocoa farmers, and the development of inclusive business models in the region.

Its ambitious US$1 billion plan, first announced in September during the United Nations General Assembly Week and Climate Week in New York, aligns with the 17 Sustainable Development Goals adopted by the global community in 2015.

The confectioner behind well-known brands such as Snickers and M&Ms hosted its first-ever Asia Pacific stakeholder dialogue on the sidelines of the Responsible Business Forum on Sustainable Development at Marina Bay Sands.

The dialogue convened some 60 senior government officials, NGOs, academics and business leaders to share perspectives and co-create regional sustainability priorities for the year ahead.