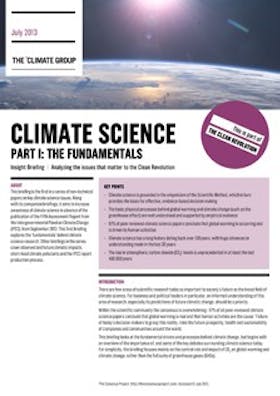 The Climate Group has written a five-part briefing series covering the basics of climate science, ahead of our live broadcast with authors of the anticipated IPCC report, which will be launched immediately before the invite-only transmission on Friday September 27, at Climate Week NYC 2013.

On Friday September 27, the Intergovernmental Panel on Climate Change (IPCC) will release the first part of its Fifth Assessment Report (AR5), which will set the benchmark in the world’s understanding of the causes, impacts and potential solutions to climate change.

In partnership with the IPCC, we hosted an invite-only briefing event on the AR5 for our members and partners, featuring a live video link from Stockholm with some of the report’s authors, who concluded the report launch immediately prior to the broadcast. You can read a summary of the briefing here.

Ahead of this critical event, The Climate Group has prepared a series of short, non-technical briefings about climate science. These briefings, which were available exclusively to members earlier in the month, cover the ‘fundamentals’ of climate change, observed climatic impacts, future climatic impacts, the work of the IPCC and short-lived climate pollutants.

To read the briefings, click on any of the buttons below. You can read a summary of the live video briefing here.