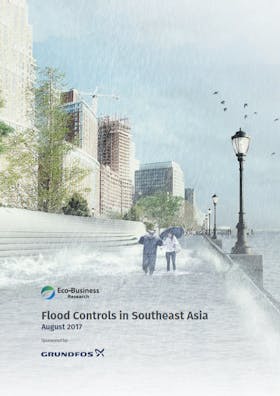 As the nations of Southeast Asia underwent rapid economic and population growth from the latter part of the last century, they also experienced rapid change to their traditional ways of life. Among these changes, people and their governments lost their traditional connection with, and understanding of water.

In many cases, the priority was in expanding city infrastructure and building homes for new residents. Rivers were often channeled into concrete drainage channels which all too often also served as waste disposal systems.

In recent years, studies from NGOs have started to highlight the impact of climate change on the economies and people of Southeast Asia as well as to point out the fragility of the tropical ecosystem and the vulnerability of low lying coastal zones on which many of the cities were built. The estimated economic fallout from just small rises in average temperatures is substantial.

Although global examples of cross-border approaches to flood control exist, Asean countries are at very different stages in their domestic implementation of effective water management systems. There are many interesting case studies for how government agencies have approached their local flood control challenges, using both natural methods and new technologies. Each scenario requires a systematic way of thinking that addresses the different stakeholders, considers the local context and history, and takes into account the possible future fallout from climate change.

A consistent message that came across from the 417 Southeast Asia respondents surveyed and interviewed for this study was that not enough was being done at a local or regional level to prepare for the impact of climate change. In particular, the main concern seems to be that dry periods are getting longer and rainfall, when it occurs, is getting heavier. Nearly 70 per cent of respondents were expecting climate change to impact the region in the next decade.

If Southeast Asia is to be able to cope with the impact of the effects of rising sea levels and heavier precipitation, a lot more dialogue and understanding of the nature of the problem needs to take place. As interviewees also pointed out, governments need to ensure adequate levels of funding to build more proactive programmes, institutes and water management systems for defending the region against the impact of climate change. Or at least, they need to better communicate the initiatives they are working on.