Electric Vehicles in Indonesia: The Road Towards Sustainable Transportation 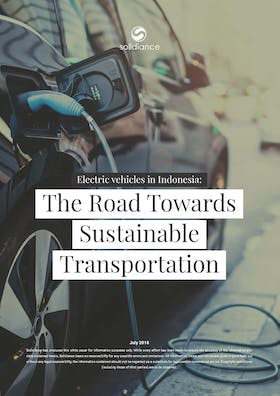 In the past few years, Indonesia has heavily relied on fossil fuel as the main energy source in all economic sectors, ranging from transportation, power plant, to household.

The high dependency on fossil fuel has resulted in several negative impacts such as:

Considering all factors mentioned, shifting to a renewable energy source in the transportation sector could mitigate high levels of CO2. The introduction of electric vehicles, given its benefits of emitting less pollution and its minimum reliance on fossil-based energy source, would then be seen as the most probable and realistic solution.

But while the benefits of energy efficient electric vehicles (EV) outweigh the cheaper costs of gasoline-based vehicles, EV in Indonesia has yet to gain its expected and maximum traction. In response to the slow adoption rate, the government has set a national roadmap in the development of the automotive industry and plans to target EV penetration as much as 2.1 million units for 2-wheeler vehicles (2W) and 2,200 units for 4-wheeler vehicles (4W) by 2025. However, with current rate of adoption and unsolved issues in the market, it is unlikely that the target would be achievable.

In this white paper, Solidiance identifies several key areas that could provide business opportunities in supporting the growth of EV penetration. Our research revealed that clear government regulations and a supporting infrastructure (fast charging stations, swapping stations, and recharging stations) are seen as areas of opportunity that is worth exploring in the EV market for all interested players to play/enter in.