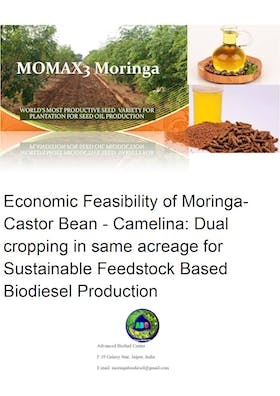 In this article we are going to discuss the potentiality of Moringa oleifera: A multidimensional Perennial Biodiesel Tree intercropped with Camelina and Castor as rotational crop. The Advanced Biofuel Center (ABC) reported its progress on its work with its mission “more Moringa ” by developing MOMAX3, the perennial Moringa variety for production of more oil per hectare.

ABC is engaged in the development and commercialisation of high yielding castor bean seeds as a cost competitive, sustainable, second-generation feedstock for the growing biofuel market. Castor is a high-value crop that has the potential to diversify our crop portfolio and crop rotation systems ABC’s elite Moringa Oleifera variety ‘Maru-Moringa (MOMax3™)’ will yield at maturity as high as 3-4000 liters of oil per hectare,

After introduction and success of MOMAX3-Moringa perennial variety, researchers at ABC were further engaged to find out the best alloy cropping for the in between row space of MOMAX3 Plantation. With introduction of Camelina and Castor Bean crops with MOMAX3 Moringa, as much as 1450 gallon of oil can be produced per year from a well developed, properly cared and efficiently managed Moringa Farm.