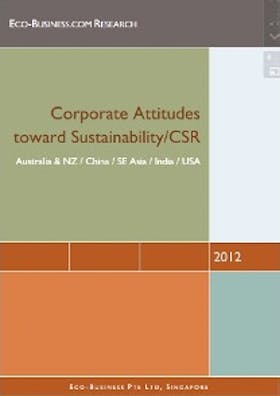 This report marks the conclusion of a first-of-its-kind survey conducted by EcoBusiness.com. It aims to give insight into corporate Asia’s attitudes towards sustainability and corporate social responsibility (CSR).

Eco-Business is a leading Singapore-based online media platform for Asia Pacific’s sustainable business community. It surveyed almost 600 professionals located mainly in Asia Pacific to seek views on the level of involvement of top managers in developing CSR strategies, the perceived relevance of sustainability to a company’s operations, progress on implementing CSR policies and barriers to such progress.

The report has found that industry captains and business managers in Asia Pacific place sustainability and corporate social responsibility (CSR) high on their firm’s priority list but this is not necessarily translating into action, with many citing cost as the biggest obstacle.

Almost nine out of 10 of business professionals surveyed said it was important for their organisation to embrace CSR.

However, less than half at 42 per cent said their company had an environmental management system in place and about 45 per cent of those surveyed said their organisation had a dedicated “green team” to integrate CSR throughout the firm’s operations.

Environmental management systems help firms to measure and reduce their environmental impacts. Encouragingly, nearly a quarter said such a system was “in the works”.

When asked to identify the main obstacle to putting CSR plans into action, about half or 45 per cent of respondents ranked cost as the top challenge, followed by lack of employee involvement (24.1 per cent) and lack of leadership (22.3 per cent).

Almost 9 in 10 respondents said that their company’s top management was involved in shaping sustainability strategies. Those who said their companies’ senior managers were involved were more likely to come from countries where CSR policies are relatively new and developing rapidly (Hong Kong, Malaysia and Singapore), while respondents from the United States, Australia and New Zealand noted slightly less involvement from top management.

Hong Kong is one location where the high level of involvement from business leaders are paying off. It ranked first for the number of respondents who said their companies had environmental management systems, and it came in second for the number of companies with an established “green team”.

India, China and Indonesia showed the least involvement from senior managers, although India led the field for the most respondents overall who believe that sustainable business practices are a priority.

Respondents from developing Asian countries were far more likely to depend on internationally recognised certification such as ISO 140001, a widely-used standard for environmental management, to validate their sustainability credentials.

India ranked at the top with the highest number of professionals saying that ISO 140001 was ‘essential’ or of ‘high’ importance, followed by Indonesia where more than half said the same. Malaysia was third.

On the other end of the spectrum, nearly half of the respondents from Australia, New Zealand, Hong Kong and the United States said that such certification was of low importance as a measure of sustainability to their organisation.

About seven out of 10 surveyed said the main targets of their CSR policies were customers, followed by employees.

Eco-Business managing director James Hosking said such research would provide an insight into Asia Pacific’s readiness to adopt such practices.

“The survey has unearthed some interesting results. It’s heartening to note that sustainability and CSR are emerging at the top of the agenda for an increasing number of business leaders in Asia,” he noted.