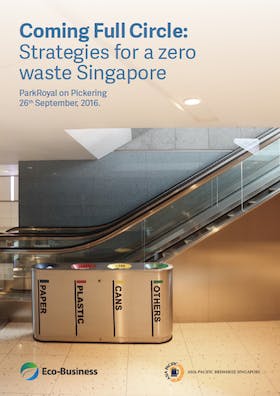 After decades of producing, consuming and disposing, Singapore is waking up to the social and environmental
consequences of a throw-away culture.

Despite having no natural resources of its own, the city-state’s growing population and economy have led to a
seven-fold increase in solid waste disposed between 1970 and 2015, according to the National Environment
Agency (NEA).

Against a backdrop of growing global resource scarcity and the need to reduce carbon emissions, there is greater urgency for the country to prioritise waste reduction and to raise national recycling rates.

Beyond Singapore’s borders, trash is also becoming a critical global problem. Landfills across the world are filling up with non-biodegradable products, which takes centuries to disintegrate, and our seas and waterways have been increasingly polluted by plastic garbage.

The World Economic Forum recently reported that about 80 per cent of the US$3.2 trillion value of the global consumer goods sector is lost annually due to the existing linear “take, make, waste” model of
consumption and production that results in goods being thrown away, usually to be burnt or buried.

For these reasons, the concept of the circular economy is finding growing currency among all sectors
of society as a sustainable solution. This is an economy in which resources are reused endlessly in a
cycle of production, consumption and reuse or recycling, thus generating no waste and contributing to a zero-waste culture.

The Ellen MacArthur Foundation, in a recent study ‘Towards a Circular Economy’, found that the economic gain from material savings alone is estimated at over US$1 trillion a year by 2025 if companies focused
on circular supply chains that increase recycling, reuse and remanufacture.

In Singapore, Prime Minister Lee Hsien Loong last year unveiled the Sustainable Singapore Blueprint, which outlines a S$1.5 billion effort for Singapore to become a smart, eco-friendly city with a zero-waste culture and a flourishing green economy by 2030.

The government has since taken a number of steps to address the growing waste problem by focusing on packaging waste, food waste and e-waste.

But despite the considerable amount of influence a government can wield, achieving a zero-waste economy will require the input and participation of all sectors of society.

This was the consensus that emerged among participants at a recently-held roundtable, “Coming full circle: Strategies for a zero waste Singapore”, hosted by Asia Pacific Breweries Singapore (APB Singapore) and Eco-Business.

Held on September 26 at Parkroyal on Pickering hotel in Singapore, the roundtable gathered about 20 thought leaders from civil society, the private sector and the governments of Singapore, Denmark and the Netherlands for an in-depth discussion on the circular economy and its application to the waste industry in Singapore. This report identifies the challenges in the waste industry and outlines specific recommendations on how to address them.