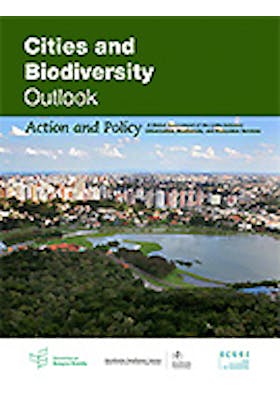 Global urbanization will have significant implications for biodiversity and ecosystems if current trends continue, with knock-on effects for human health and development, according to a new assessment produced by the UN Convention on Biological Diversity (CBD) in partnership with the Stockholm Resilience Centre (SRC) and Local Governments for Sustainability (ICLEI).

Much more to be built

The assessment, which is scientifically edited by centre researcher Thomas Elmqvist and draws on contributions from more than 120 scientists worldwide, states that over 60 per cent of the land projected to become urban by 2030 has yet to be built.

This presents a major opportunity to greatly improve global sustainability by promoting low-carbon, resource-efficient urban development that can reduce adverse effects on biodiversity and improve quality of life, it says.

The Cities and Biodiversity Outlook (pdf, 5 MB) is the world’s first global analysis of how projected patterns of urban land expansion will impact biodiversity and crucial ecosystems.

The report states that urban expansion is occurring fast in areas close to biodiversity ‘hotspots’ and coastal zones. In rapidly urbanizing regions, such as large and mid-size settlements in sub-Saharan Africa, India and China, resources to implement sustainable urban planning are often lacking.

“More than half the global population already resides in cities. This number is projected to increase, with 60 percent of the population living in urban areas by 2030,” said Achim Steiner, UN Under-Secretary General and Executive Director of the United Nations Environment Programme.

“This report makes a strong argument for greater attention to be paid by urban planners and managers to the nature-based assets within city boundaries, and shows how urbanizing areas represent major opportunities for reducing carbon emissions and creating a more sustainable and resource-efficient world,” he added.

Rich diversity can exist in cities

Urban green spaces perform important ecosystem services, such as filtering dust, absorbing carbon dioxide from the air and improving air quality. Data from the United Kingdom shows that a 10 per cent increase in tree canopy cover in cities may result in a 3 to 4°C decrease in ambient temperature, thus reducing energy used in air conditioning.

Urban biodiversity also delivers important health benefits. Studies have shown that proximity to trees can reduce the prevalence of childhood asthma and allergies. Sustainable urban planning, which addresses biodiversity issues along with other priorities such as poverty alleviation, employment, and housing, can bring positive effects for health and the environment.

“Cities need to learn how to better protect and enhance biodiversity, because rich biodiversity can exist in cities and is extremely critical to people’s health and well-being,” said Professor Thomas Elmqvist.

A response to knowledge gaps

The Cities and Biodiversity Outlook highlights a wide range of successful initiatives by cities, local authorities and sub-national governments in both developed and developing countries.

In Bogotá, Colombia, measures such as closing roads on weekends, improving the bus transit system and creating bicycle paths resulted in increased physical activity among residents, and a reduction in greenhouse gases emissions.

“The Outlook provides an overview and response to knowledge gaps in how we understand processes behind urban social-ecological systems and how urbanization is shaping land use,” said Thomas Elmqvist.