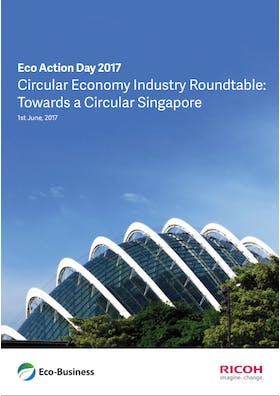 There has been no starker reminder of the urgency for change this year than United States President Donald Trump’s announcement that he would withdraw the US from the Paris Climate Agreement, proclaiming that he was “elected to represent the citizens of Pittsburgh, not Paris”.

Early reports of the news streamed in on the same morning the Eco Action Day 2017 Circular Economy Industry Roundtable got underway in Singapore. The sense of disappointment from the audience was palpable. But while the world’s largest economy may have slowed the progress made in Paris, there is no pause button for climate change.

Delegates at the event agreed that it is more critical than ever to push the boundaries of innovation and forge a new path towards a more sustainable future.

Radical change, however, calls for radical ideas, and the circular economy is one that has come of age. Governments, businesses and civil society, both in Singapore and around the world, are waking up to the principle of using resources sparingly, then reusing them.

For the first time in its 11-year history, Eco Action Day this year cast the spotlight on the circular economy. One of Singapore’s longest-running environmental initiatives, Eco Action Day is held annually to mark World Environment Day. The ongoing partnership between Ricoh Asia Pacific and Eco-Business, the event’s co-organiser, is based on the desire to push the boundaries of innovation and sustainability in Singapore.

The Eco Action Day Circular Economy Industry Roundtable, held on 1 June, 2017 at Ricoh Asia Pacific, was geared to discuss practical steps to help Singapore achieve circularity. Around 50 delegates from the public, private and people sectors spoke about the importance of design in a circular economy, the role of legislation, and the obstacles to making this zero waste vision a reality.

The Circular Economy Industry Roundtable: Towards a Circular Singapore report highlights the best ideas and advice to emerge from the discussion, as well as the top three winning entries of the Circular Economy Challenge, which tasked young people in Singapore to come up with solutions to make businesses more circular in their practices.