China Outpacing Rest of World in Natural Resource Use 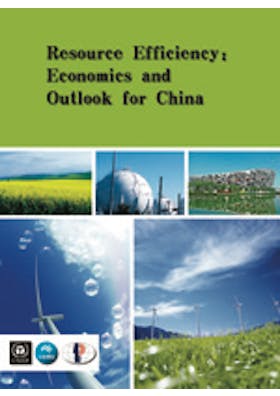 This report, a joint effort of UNEP and its regional partners, the Commonwealth Scientific and Industrial Research Organisation (CSIRO) of Australia and the Chinese Academy of Sciences, intends to quantify environmental pressures through deeper analysis of resource use patterns, resource efficiency, drivers of resource use, greenhouse gas emissions and resource efficiency policy in China.

China’s rapidly improving material standards of living have come with a greatly increased per capita demand for natural resources, and a corresponding increase in the environmental pressures associated with extracting, processing, and using these natural resources.

The efficiency with which China converts energy into economic output, as measured by TPES/GDP (energy intensity), improved greatly over the period 1970 to 2009. Over the full period, energy intensity (EI) decreased at an average rate of 3.91 per cent p.a. compounding. The Chinese improvement in energy efficiency by far exceeded the improvements for the world (0.68 per cent per annum) and for Asia and the Pacific (0.13 per cent per annum).

Material intensity (MI) indicates the extent to which an economy has managed to decouple its growth from ever increasing inputs of raw materials. For most of the period 1970 to 2008 China exhibited a clear trend toward decreasing (improving) MI, decreasing by around 2% p.a. compounding, between 1970 and 2000. Unfortunately, since the year 2000, coinciding with a period of extremely rapid economic growth in China, the ongoing improvement in MI has almost stagnated, with MI decreasing by less than 1per cent p.a.

China’s growth in total water withdrawals was subdued over the period 1980 to 2005, when compared to the extremely rapid rates of growth in consumption of materials and energy. The total changes for the three sectors over the full twenty five year period were: agriculture –8 per cent, industry +81 per cent, municipal +797 per cent, total + 25 per cent.

China clearly achieved major decreases in its GHG intensity over most of the period 1970 to 2005, notably from the late 1970s to the early 2000s. Despite these improvements in GHG intensity, GHG emissions per capita grew rapidly over the same period, by an average of 4.1% p.a. compounding, with growth accelerating from the turn of the millennium.

By the end of 2010, China had basically realized the targets of energy conservation and emissions reduction set up in the 11th FYP, including reducing accumulated CO2 by 1.46 billion tonnes, energy intensity by 19.1 per cent annual SO2 by 14.29 per cent and COD emissions by 12.45 per cent.

China is the world’s largest market for new construction projects with around 2 billion square metres of floor space added annually, mostly in urban areas. While 60 per cent of these new buildings are classified as residential, 30 per cent are public buildings (i.e. non residential buildings) and the remaining 10 per cent are used for industrial purposes. At present, the building sector accounts for nearly 30 per cent of China’s total energy consumption, and this proportion is growing steadily.

China is a leading producer and consumer of motor vehicles and it has overtaken the United States as the biggest automobile market in the world. The number of registered cars increased from around 1 million in 1994 to nearly 33 million in 2008 (Pan, 2011).

China is world leading in its effort to align economic development objectives with environmental objectives through well designed public policies that increase human wellbeing and reduce environmental degradation through promotion of a circular economy and cleaner production.