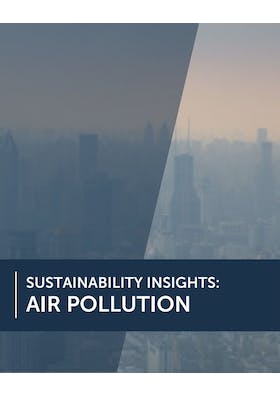 With only six of China’s cities meeting the second tier of the National Environmental Air Quality Standards (NEAQS) in 2015, air pollution has become one of the biggest signs that economic growth is unsustainable.

There is a significant financial implication to this phenomenon as premature deaths and health problems from air pollution cost China as much as $US300 billion a year (Greenpeace, 2015).

Why this is an issue of concern going forward for the next 15 years is that as Chinese incomes rise, people will demand new cars, more electricity, and better industrial products, all of which rely on increasing energy supply and will in turn cause more emissions if the business-as-usual development model is applied.

This has wide-ranging impacts on the environment and economy, as well as on health, an area of great concern to individuals and certainly more important to the Chinese population, and this is encouraging change.

The issue of air pollution is not isolated to the cities alone, but all over the country as well. Awareness and action are on the rise as China now has financial capabilities to tackle the issue head on.

Improvements in China’s air quality will not only come through national government action, but will also require the engagement and enforcement of regulations at provincial and local levels of government.

Recent pledges coming from the national level to reduce pollution, through the 13th Five-Year Plan and measurable improvements in AQI during 2015 show progressive steps are being taken and improvements are being seen. However, these improvements are only the first steps of what will be a decade-long process towards making China’s air quality will be considered “clean”.

Many of these steps are going to open up vast numbers of opportunities for firms to bring their solutions to the China market, and actors must be well-placed to capitalize and fill gaps in services that the society and market require.

This report analyses the composition and sources of air pollution in China, explains important trends in relevant industries, introduces recent regulatory measures, and provides predictions about policies and technologies that can help curb air pollution in the next decade.