Why was there a stranded sperm whale in Wakatobi, Indonesia?

Earlier this month, a 9.5-metre sperm whale was found stranded off the coast in Kapota Island, Wakatobi — dead.

The cause of death was unknown.

But what we do know is that 5.9 kg of plastic was found in its stomach.

On the scene of the incident was non-governmental group World Wide Fund for Nature (WWF) Indonesia. WWF-Indonesia’s campaign and mobilisation manager Dewi Satriani talks us through the incident.

Below is information on the timeline of what happened, and everything you need to know. 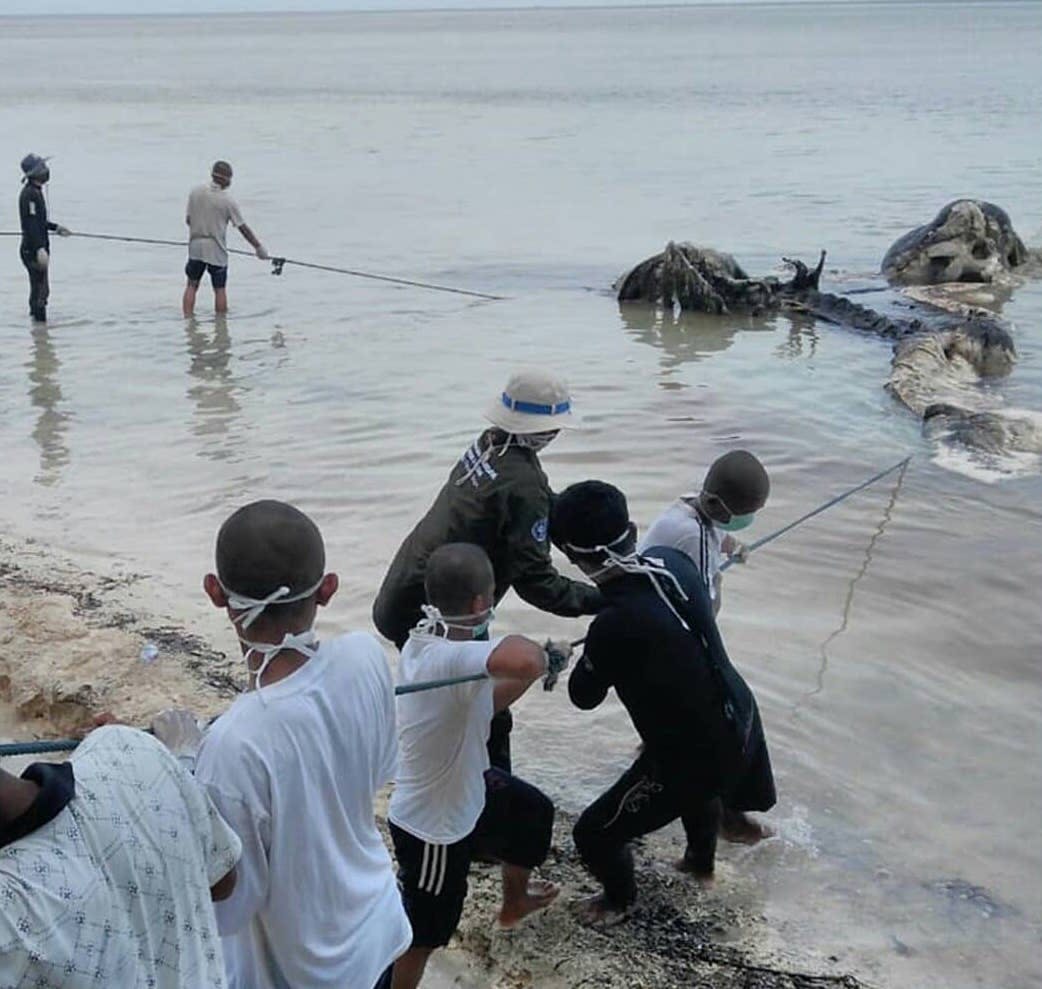 1. The whale was found by a local on a Sunday evening

WWF-Indonesia received a report from a community member of Kapota Island in Wakatobi on Sunday evening, November 18 informing of an incidence of a dead whale stranded off the coast.

The next Monday morning, November 19 at 7.30 AM local time, WWF-Indonesia, Wakatobi National Park, Wakatobi Marine and Fisheries Community Academy were deployed to the scene and discovered a whale carcass suspected to be a sperm whale.

2. The whale was already in an advanced state of decay

This is the reason why it was not possible to conduct a necropsy to investigate the cause of death. In this stage of decay (level 4), the carcass was already releasing an overpowering stench and the body was not intact. A necropsy can only be done if the stranded whale was still in level 2 of decay; when the skin still appears tight, emitting no smell, and the eyes still shine.

3. Identifying the whale was still possible

Even though the whale body was no longer intact, WWF-Indonesia marine species specialist Dwi Suprapti conducted a photo analysis of the carcass sent by the WWF-Indonesia team and identified the stranded whale as a sperm whale (Physeter macrocephalus). It has a block-shaped head, narrow jaw and teeth.

Sperm whales are the largest toothed-whale, unlike other large-sized counterparts that are toothless. The possibility of it being a baleen whale was also ruled out thanks to the absence of prominent, iconic features of baleen like the rostral ridge and ventral grooves. This further confirms the fact that the stranded whale is a sperm whale (and not a blue whale as some news outlets have reported).

4. Finding a stranded whale in Wakatobi waters is not common

“Whales do migrate through Wakatobi waters. In certain seasons we can see many different kinds of whales passing through Wakatobi islands, but stranding is not common. This was the only time we found a stranded whale, which was also [alarming] because we also found plastics in its abdomen,” Satriani said.

5. The locals decided to cut open the abdomen of the carcass 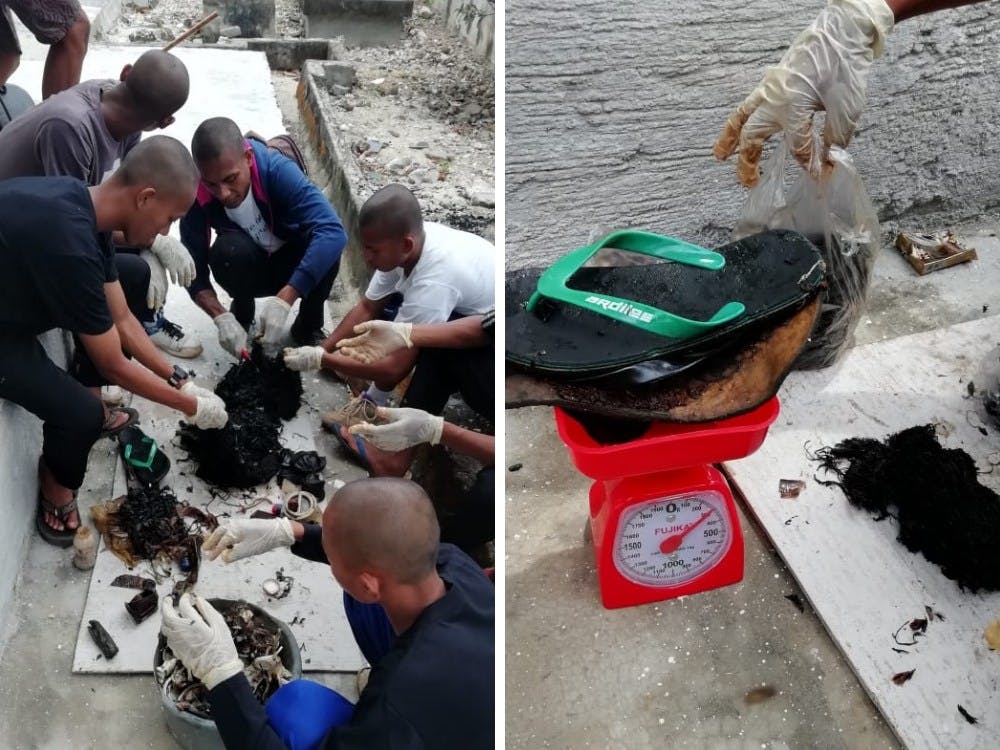 The chunks of black material (left) are plastic raffia strings. A rubber-canvas sandal (right) with the Ardiles brand logo visible was among the finds. Image: Muhammad Irpan Tassaka

“This discovery is deeply upsetting. It is a wake-up call for Indonesia about how plastic pollution is causing irreparable damage to our oceans and marine life. We urge businesses and governments to work together to address this issue urgently to prevent further plastic leakage into our oceans.” said Suprapti.

6. There was no crowd management or public boundaries during the incidence

So as not to interfere or disturb the stranded whale, public members without any Personal Protective Equipment (PPE) including eye and face protection, gloves, and coveralls were advised to remain at a distance. This is a crucial protective measure to avoid any exposure of bacteria, virus or other dangerous microorganism emitted by the decomposed mammal and transmissible to human.

When the stranded whale is in the advanced state of decay, direct contact to the carcass can transmit the bacteria through breathing. It affects human and may cause allergic reactions, high fever, and infections.

7. The whale carcass was buried two days after it was discovered

It was buried on November 20 at Kolowawa Beach, North Kapota in Wakatobi for later retrieval of the bone specimen by the Wakatobi Marine and Fisheries Community Academy.

8. Plastic pollution is a transboundary problem that all countries share

Although it remains uncertain whether the plastics were lodging the sperm whale’s ingestion organ or caused infections, we can’t turn a blind eye to how plastics production and pollution are still growing exponentially.

Every year, 8 million tonnes of plastics enter the ocean. By 2050, the total mass of ocean plastic will exceed that of fish. Plastic debris kills an estimated 100,000 marine mammals annually, as well as millions of birds and fishes.

9. Beach clean-ups are not enough to solve the problem

A big part of marine pollution comes from land sources, including rivers. Tackling the root of plastic pollution goes beyond fragmented actions and blaming individuals for the choices they cannot influence. An effective response to this crisis requires a global systemic change involving businesses and governments — and supported by consumers.

10. You cannot solve this issue alone

Knowing that marine plastic pollution goes beyond Indonesia and the region, the global crisis requires global governance solutions. It is the onus of the governments and businesses to fix the broken system which is enabling plastics leakage into the environment.

Businesses need to take responsibility for the full life cycle of their products and play their part in helping governments deal with this issue.

Sharon Salim is an impact communicator at WWF-Singapore, working on editorial writing, copyrighting and digital marketing.